For the 5th year in a row, anti-choice legislators across the country pass record numbers of abortion restrictions 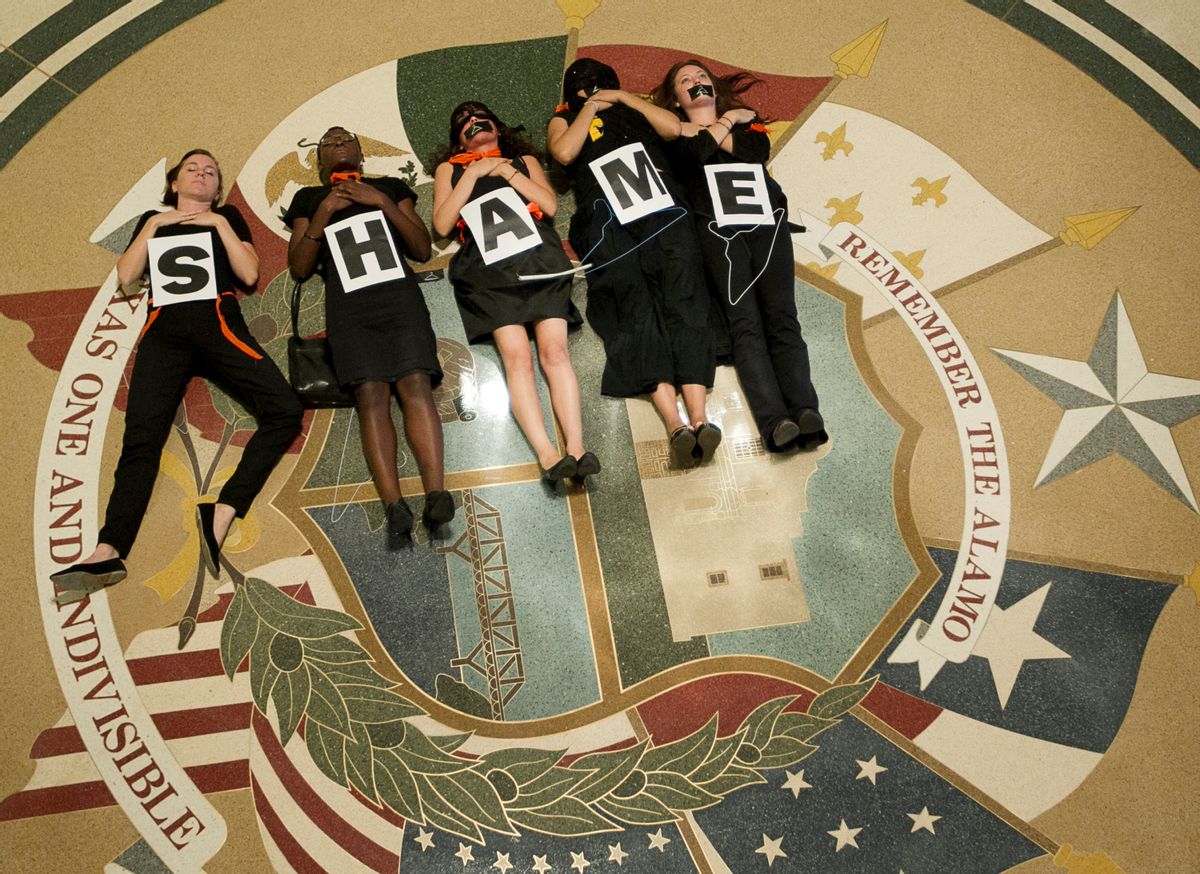 FILE - In this July 18, 2013 file photo abortion rights supporters demonstrate outside the Capitol auditorium in Austin, Texas, after Gov. Rick Perry signed sweeping abortion restrictions that forced the closure of several clinics by requiring doctors who perform abortions to have admitting privileges at a nearby hospital. A federal appeals court on Thursday upheld Texas' tough new abortion restrictions that shuttered many of the abortions clinics in the state. A panel of judges at the New Orleans-based 5th Circuit Court of Appeals overturned a lower court judge who said the rules violate the U.S. Constitution and served no medical purpose. In its opinion, the appeals court said the law "on its face does not impose an undue burden on the life and health of a woman." (AP Photo/Austin American-Statesman, Jay Janner) AUSTIN CHRONICLE OUT, COMMUNITY IMPACT OUT, MAGS OUT; NO SALES; INTERNET AND TV MUST CREDIT PHOTOGRAPHER AND STATESMAN.COM (AP)
--

While GOP members in Congress continue to push forward with show trials and toothless efforts to defund Planned Parenthood, state Republicans are making real headway with the efforts to make forced childbirth the punishment for women, at least low-income women, who have unwanted pregnancies.

A new report by the Center for Reproductive Rights (full disclosure: my partner works there) shows that state legislators across the U.S., though primarily in the South, introduced nearly 400 bills in 2015 to restrict abortion access. Forty-seven of those bills, most of which are red tape laws aimed at shutting down perfectly safe clinics under the guise of "protecting women's health," passed into law.

This is just the latest in a multi-year effort to dismantle legal abortion access, one pointless restriction at a time. From 2011 to 2014, states passed a whopping 231 restrictions on abortion into law. Factor in this year and you have 279 new restrictions over the course of a mere five years.

While the legislators who pass these bills flap their lips about supposedly protecting "life" or even saving women from "regret," the reality is that these laws function mainly to punish women by making the abortion process as painful and lengthy as possible. Red states continue to expand the waiting period and to add restrictions that force women to make multiple trips to the doctor to get a procedure that generally should take no more than a few hours.

"Were it not for a court order blocking such a law in Florida, every single southern state would force patients to delay their care," the report reads.

Look no further than Texas for proof of this. In 2013, the state passed an omnibus bill aimed at shutting down clinics in the state through a bunch of medically unnecessary requirements that were too expensive or just outright impossible for clinics to meet. More than half of the state's 41 clinics have closed already due to these restrictions and, if the Supreme Court hadn't stayed some portions of the law while it's being litigated, all but 10 clinics in the state would close. (The Supreme Court is expected to hear arguments about this case during this session.)

But cutting the state's abortion services in half didn't do anything to reduce demand. It just forced clinics to put women on a wait list. In a report released by the Texas Policy Evaluation Project at UT Austin, researchers found that some women were having to wait a whole three weeks to get an abortion that would have previously been something you could get done shortly after making an appointment.

Long wait times are no fun with any kind of medical care, but with abortion, it's a particularly bad deal. The chance of going into the second trimester rises the longer the wait is, making the abortion more costly and difficult to do. Longer waits also mean the embryo is more developed and may even go into the "fetus" stage, which can make the entire ordeal that much more stressful for women — the longer you're pregnant, the more symptoms you have to deal with, and the harder it gets to keep it to yourself.

Unsurprisingly, many women in Texas want to avoid this miserable process altogether and are looking to the black market to get an abortion instead. Another report by the Texas Policy Evaluation Project, released in November, found that anywhere from 100,000 to 240,000 women in Texas had attempted to abort a pregnancy on their own. Women living close to the border are more likely to have tried it. This is both because clinic closures have affected those areas most dramatically and because Misoprostol, an ulcer medication that induces abortion, is easy to buy over-the-counter in Mexico or from a black market dealer selling in the U.S.

It's hard to blame them. Misoprostol is half of the RU486 regimen that the FDA has approved for medical abortion, but on its own it will safely and effectively terminate pregnancies 75 to 90 percent of the time. Even if it doesn't work all the way, it will start a miscarriage process, allowing a woman to show up at E.R. to have the rest removed legally and safely, without ever having to book an appointment at an abortion clinic. Misoprostol induced miscarriages look no different than natural miscarriages to a doctor. The whole process allows women to abort safely and privately, an option that becomes all the more appealing when going the legal route means waiting three weeks, traveling for hundreds of miles, having to arrange for child care and taking off from work.

It's been said before, but always worth restating: If anti-choice legislators were serious about reducing the abortion rate, they'd pass laws making birth control free and proper sex education mandatory, and they would put a bowl of condoms in every bar and coffeehouse and public bathroom in the state. The fact that they concentrate instead on laws that mostly serve to make abortion more miserable — or to drive women to turn to the black market instead — shows that these laws are punitive in nature. It's about making women pay for having sex, and nothing more.