In our paranoid Tea Party age, the benevolent alien Overlords of "Childhood's End" are a tough sell

It's far from a total loss, but there's not a lot of Arthur C. Clarke left in this Syfy adaptation 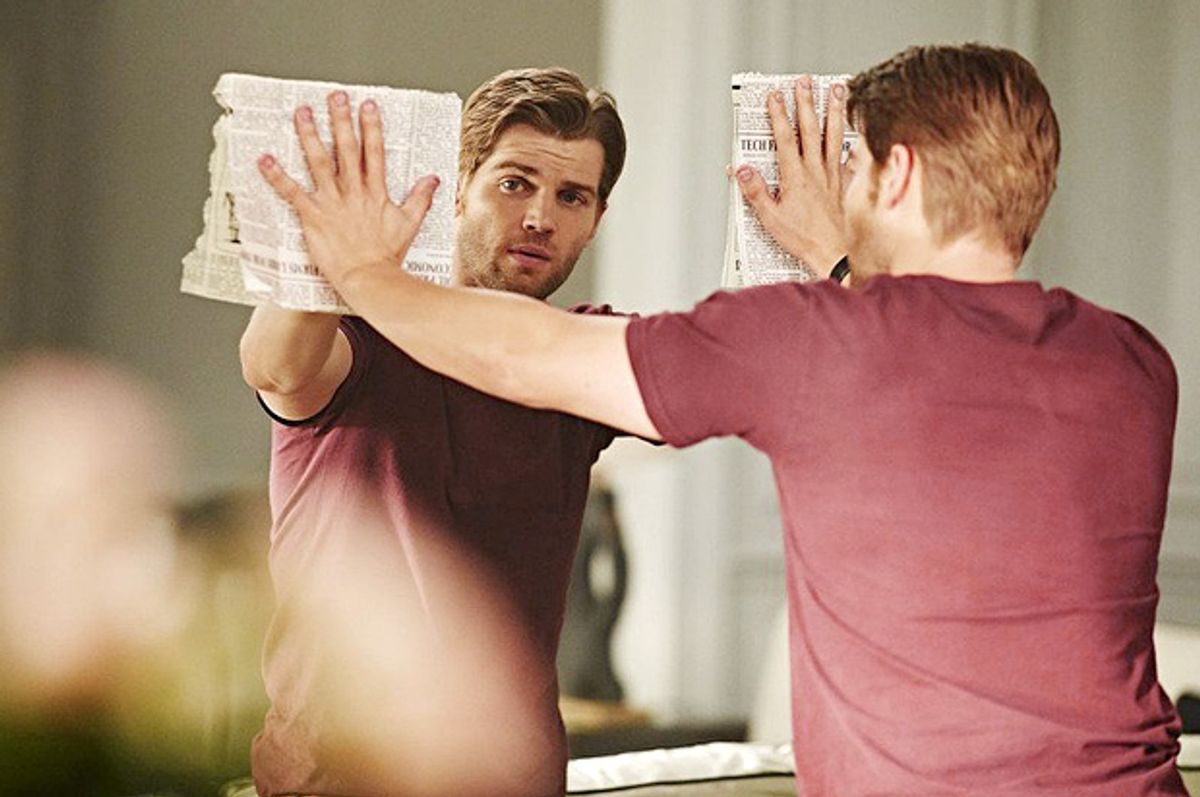 A longtime inhabitant on lists of the best-ever science-fiction novels, Arthur C. Clarke’s “Childhood’s End” has – after decades of failed attempts – now become a six-hour miniseries on Syfy. (The first episode premieres tonight.) The show involves some substantial people – Charles Dance from “Game of Thrones” plays an important role, it’s produced by Michael De Luca, and the writers have roots in “Doctor Who.” There are reasons for optimism here.

One day, alien ships appear above cities around the world, from Mumbai to Rio to New York. Apparently, these aliens – quickly dubbed the Overlords, though they were hoping for something a little more benign, like “visitors” – will end war, famine, suffering, and most other kinds of unpleasantness. Along the way, mankind will maintain its autonomy.

“We’re not conquerers, we’re enablers,” the British-accented head Overlord, Karellen (Dance) announces. Soon, he convinces a handsome Midwestern farmer named Stormgren (Mike Vogel) to becomes what another character calls “the sole spokesperson for an alien race.” Stormgren, who could come from a Dockers commercial, appears in just about every scene in the debut episode, pleading with people – including an ornery, rebellious group called the Freedom League -- to trust the Overlords.

It’s no secret that books are tricky to adapt in even the best of circumstances, and cerebral, philosophical science-fiction novels don’t have a great batting average. “The Man in the High Castle” lost some of its ideas and became something closer to a well-designed action movie, to the dismay of some fans. If you’re an admirer of Clarke’s work in general and his novel in specific, “Childhood’s End” is likely to frustrate you at least a little, and maybe a lot.

Clarke’s novel “2001: A Space Odyssey,” turned into one of the most successful science-fiction adaptations in history. That book was, in its way, as cerebral as “Childhood’s End.” But the movie had one major advantage over SyFy’s adaptation: Director Stanley Kubrick trusted the book’s slow pace, and brought his own eccentric style and meditative tone to the material. “Childhood’s End,” by contrast, feels generic. It communicates neither Clarke’s style nor a directorial vision. In contrast to “High Castle,” for instance, its visuals and design are simply bland.

Of the major science-fiction novelists of mid-century, Clarke – an Englishman who later moved to Sri Lanka – was the most philosophical and the most elegant prose writer. He was also, despite his fascination with the future, an old-fashioned humanist in lot of ways. (He was also, most likely, a closeted homosexual in a subculture that was still had a strong macho streak.) One of the tensions in “Childhood’s End” is whether the gifts the Overlords bring – world peace and all the rest – are worth if it mankind becomes less human. The novel doesn’t really work if there’s not some ambiguity around the idea.

This means the larger problem has less to do with the TV adaptation and more to do with the way Anglo-American society has changed since the 1950s. For all the anxieties of the Cold War, there was still some faith in progress, in the notion that human nature was perfectible, and that leaders could be trusted. Clarke’s novel came out in 1953, just two years after the movie ‘The Day the Earth Stood Still,” in which an alien comes to earth preaching peace. Not everyone in the movie trusts him, but the filmmakers do, and by the end, the audience does, too.

By 2015, we pretty much know what to expect when anyone – whether from Washington, D.C. or another planet – shows up and tells us as they “here to help.” Whether you were moved by the anti-government energies of the Reagan revolution, are a dedicated member of the Tea Party, or just saw the miniseries “V.” at an impressionable age, you know that you can’t trust promises from anyone in a position of leadership. The spirit is in the air on the left as well. At this point, we’re all in the Freedom League.

The adaptation seems to understand this halfway: In the novel, the Stormgren character – the show’s Everyman farmer – was the Secretary-General of the United Nations. The switch to a more heartland-friendly character seems like a concession to the age of anti-elitism, but the overall effect is dissonant. That is: If we don’t trust the U.N., we sure as hell won’t trust an alien calling himself Karellen who refuses to show his face.

So there’s not a lot of Clarke, not a lot of personality, and not a lively play of ideas in SyFy’s “Childhood’s End.” Weirdly, though, the show is always watchable and at times better than that, and the first episode (which tracks, approximately, the novel’s first part) ends at a fascinating hinge moment. Even Clarke fans who miss the soul of a favorite book may want to tune in to episode two to see how it all works through.