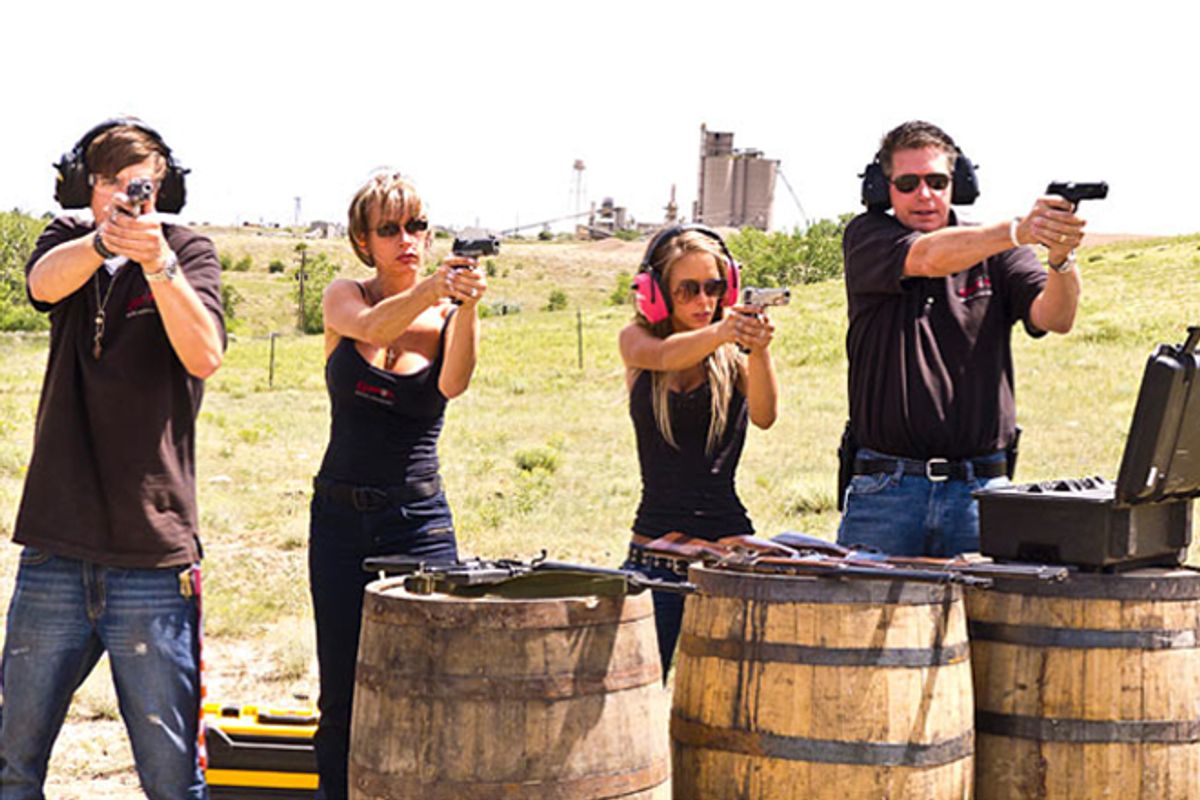 Monday is the 3rd anniversary of the horrific mass shooting in Newtown, Connecticut that took the lives of 20 children and six adults at the Sandy Hook Elementary School. For Newtown, it's a sad day, but for the gun industry that profits off selling cowboy fantasies to paranoid right wingers, the anniversary has a very different meaning: It marks the beginning of a major surge in interest in buying up their deadly product.

As the Washington Post reports, data from Google Trends shows a gradual climb in online searches for information on concealed carry in recent years. It was already climbing in 2013, but the Sandy Hook shooting caused a dramatic spike.

In fact, the top four gun makers have earned more than $632 million since the Newtown massacre, according to the New York Daily News.

The San Bernardino shooting, meanwhile, has sparked an increase that dwarfs even the levels met in the aftermath of Sandy Hook. The likely explanation for all this is that many Americans, likely of the more conservative bent, buy into the argument that a "good guy with a gun" can somehow stop a mass shooting from happening. Not a big surprise there. Right-wing media's standard response to a mass shooting these days is to double down on propaganda pushing Clint Eastwood fantasies, telling a bunch of highly suggestible people that they, despite all evidence to the contrary, are going to bust out, John Woo style, flying across the room and firing like a boss right into the bad guy's head.  The NRA themselves are eagerly exploiting the marketing opportunities here, as evidenced by an ad that's running on Twitter this week:

Some fantasies can become reality, but not in the case of the "good guy with a gun" ones. As Christopher Ingraham at the Washington Post explains:

The only problem is that the research generally doesn't back up this notion. Social scientists are finding that more guns lead to more gun crime. Loosening concealed carry restrictions is associated with an increase in assault, rape and murder. And most people are shockingly bad at effectively using their guns in a self-defense situation.

Of course, there's cold, hard stats and then there's seeing it with your own eyes. Last week, Jordan Klepper of "The Daily Show" did a two-part segment where he tried to learn to be a "good guy with a gun." He got far more training than the average concealed carry licensee got, adding multiple hours of "active shooter" training to the comically thin amount of training you are required to get a concealed carry license. But despite actually getting trained in a way that almost no handgun users are, Klepper utterly failed at the "active shooter" simulation.

The video is well worth watching, showing that no matter how much training you get, it's nearly impossible to tell the difference, in a tense situation, from a person who is coming at you and a person who is trying to flee the scene. Or, as Klepper found out when the police "shot" him during the simulation, it's nearly impossible for law enforcement to tell the difference between the "bad guy" and the "good guy" with guns when they show up at a location with an active shooter.

When you're watching an action movie, the casting list tells you who to root for and who to root against. But in real life, the cops who are descending on a scene do not have star billing to tell if the guy waving a gun around is the wannabe hero or the bad guy. Facts don't perform well against hero fantasy-peddling propaganda, unfortunately.

The Google data demonstrates, from multiple angles, how much this debate is really being shaped by people's fantasies, bigotries, and emotion rather than reason. After all, the biggest spike in concealed carry interest came after the San Bernardino shooting. What makes that shooting different than the others that caused less of a response? It's not the casualty rate, which was high but still falls short of incidents such as Sandy Hook or the Virginia Tech shooting. No, the big difference is that the shooters look like they were Islamic terrorists, which means that it's even more emotionally salient for paranoid right wingers. Now the fantasy isn't just about being an action hero who saves lives, but being an action hero that fights terrorism. As advertising for guns go, the only way it could be better is if pulling the trigger someone injected Viagra directly into your veins. The Google Trends chart suggests that the interest in concealed carry post-San Bernardino has very little relationship to the risk of facing down an Islamic terrorist.

The darker states are the ones with the biggest spike in interest in concealed carry. And here's a chart listing the states with the highest search rates for "concealed carry" after San Bernardino:

Meanwhile, California's relative search volume index is a paltry 14, even though that's the state the shooting actually happened. In New York, which has the city that is most likely to be hit with a Paris-style attack, the index is only 12. But in places that hold very little interest for ISIS or ISIS-inspired terrorists, interest in guns in through the roof.

Clearly, this entire rush to buy guns for concealed carry has very little to do with actual risks of violence at the hands of Islamic terrorists. It's about a fantasy, one that has very little to do with real world fears and everything to do with identity. Buying a gun to fight the terrorists is a bit of play-acting by conservatives, a bit of role-playing that they can indulge with confidence that they'll never actually be tested to see if they have the terrorism-fighting superhero inside that they claim to have.

The problem is that their little game is that they're playing it with real weapons, weapons that will never be used against terrorists but might be fired off by curious children or fired in anger after having a few too many and getting in a spat with the spouse. Or, in the worst-case scenario, purchased by an angry man who wants to shoot up a school or a movie theater, a man who looked for the world like a "good guy with a gun" when he showed up at the gun store to purchase his weapons of mass murder.