When he leaves Fox News, he'll "probably drive around in the car, talk to myself for three hours a day" 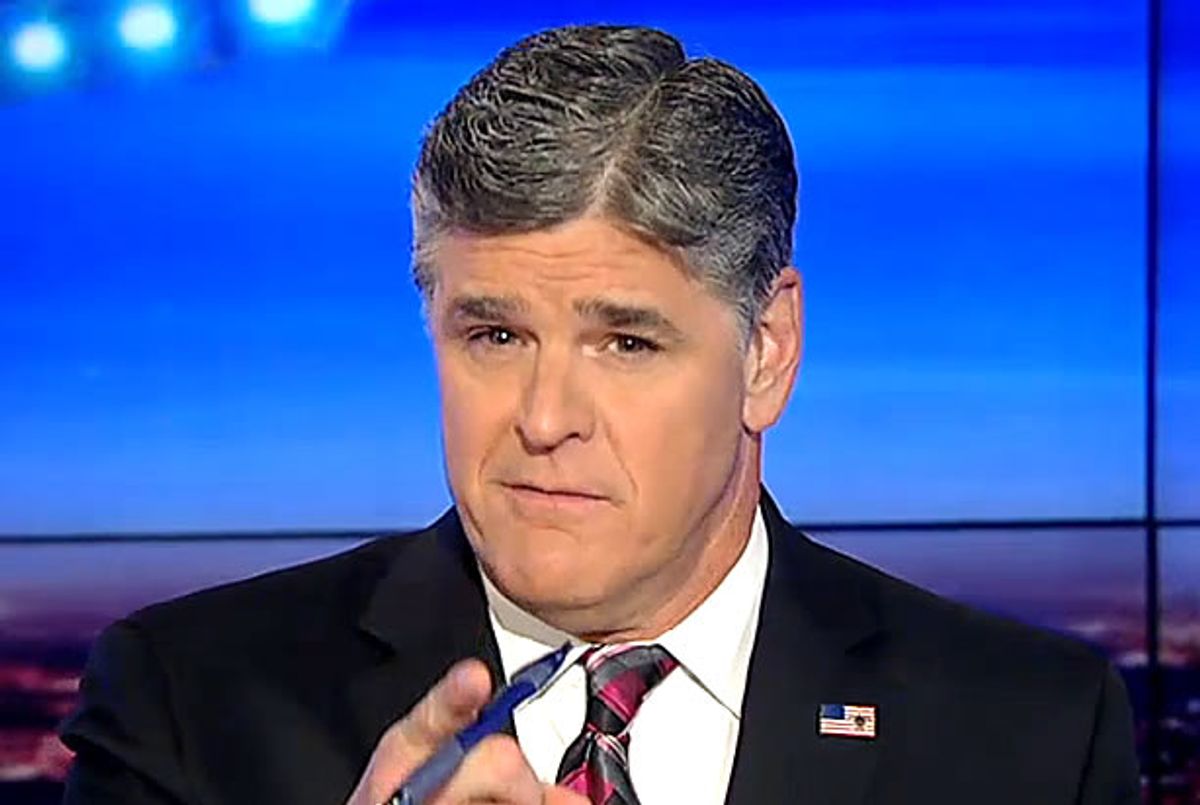 In a profile for International Business Times, Brendan James sketched a portrait of Sean Hannity decidedly at odds with his combative public persona, and yet somehow just as hypocritical. No matter how heated the conversations are on-set, for example, "I was friends with Alan Colmes. I’m friends with Geraldo [Rivera]. Tamara Holder [a liberal Fox contributor] is a friend of mine. I think they’re wrong, and when we’re debating, we’re debating."

He spoke candidly about losing his time slot to Megyn Kelly, claiming that it "was the best thing that ever happened. I was lucky because I was able to get some more flexibility with my schedule" -- a "flexibility" that includes a studio Fox built for him near his home in Long Island. He's clearly not on the ropes with the channel that made him a star, but he's also no longer its golden boy.

While Kelly is praised for asking questions tough questions, both in the GOP debates and when they appear on "The Kelly File," Hannity remains committed to lobbing softballs at establishment Republicans. As one GOP operative put it, "[i]f you’re a Republican and you wanna talk to the conservative base, you go on his show."

"He wants to be able to get the guests he wants, when he wants them," the operative said. "He wants to have exclusives."

He is also an online entrepreneur, who established his "Hannidate" dating service for forlorn conservatives in 2006. While that site has since gone under, Hannity told James that he was willing to resurrect it for the Tinder generatoin. As for how successful it was, he claimed that "many people got married," though he admitted he didn't "know the whole number."

Making self-important claims without "know[ing] the whole number" is, in fact, Hannity's modus operandi. He said that on his speaking and book tours, he often pressures couples into getting married. "I’m like, ‘How long you been dating?’ ... ‘OK, why haven’t you asked her?’ And I put him under the gun. Then I say, ‘why don’t you do it now?'"

"'Don’t you think he should do it now?’" he asks the crowd, which according to him, "gets into it. I have a success rate of about 90 percent." When James asked how he know that, Hannity said, "I don't know, but it doesn't matter."

Unfortunately, he plays similarly fast-and-loose with the facts on "Hannity," frequently citing "a Washington Post poll [that shows] sixty percent of Republicans feel betrayed by Washington Republicans." When James contacted Fox News and requested a link for that poll, James noted parenthically, "[i]t turned out to be an in-house Fox News poll."