"Star Trek Beyond" looks like a corny, frantic mess: This is supposed to distract us from "Star Wars" mania?

With J.J. Abrams handing directing duties to Justin Lin, it's hard to be too confident about this new trailer 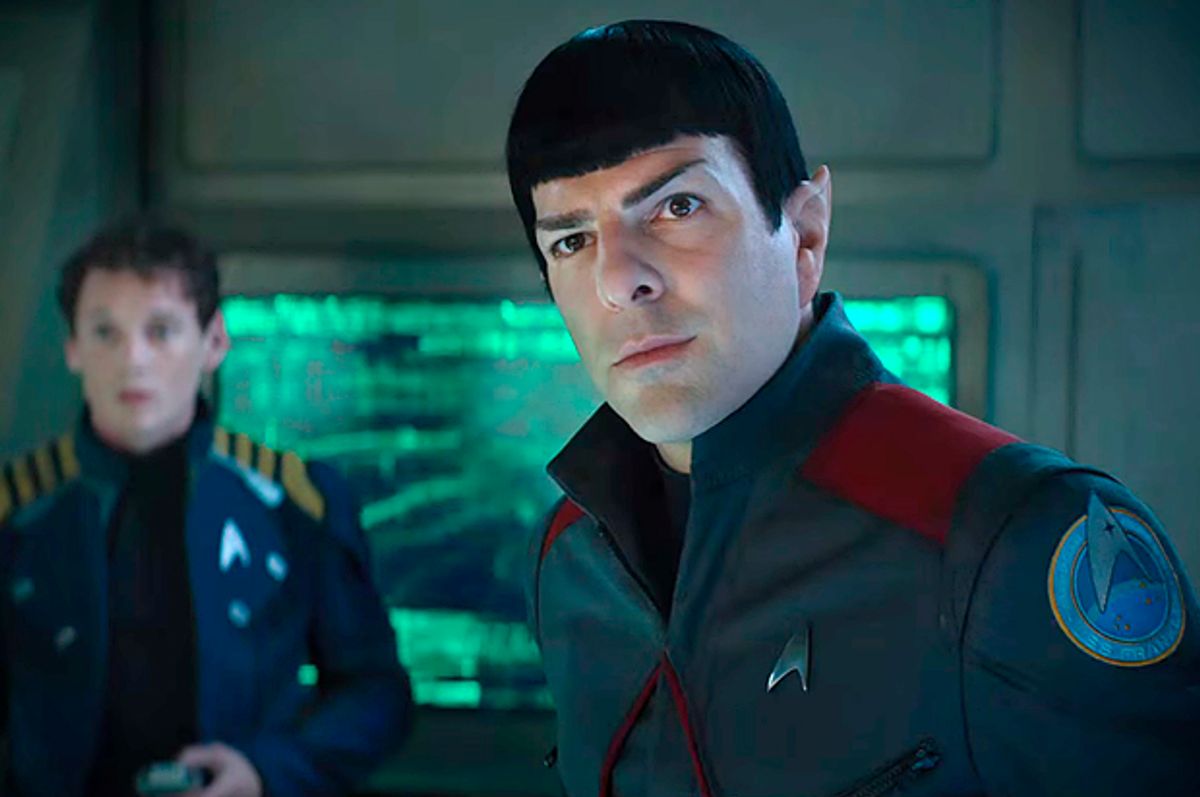 It’s hard to think of another minute-and-a half that could set the Internet on fire like this. But in what looks like a naked attempt to keep the hype around “Star Wars” from blasting everything else out of the heavens, Paramount has released the first trailer from “Star Trek Beyond.” And while it’s always hard to get a full sense of a movie from these brief, chopped-up excerpts, it seems likely that – even by the standards of summer sci-fi blockbusters -- this one is aimed squarely at amped-up teenage boys.

This is the third film since J.J. Abrams rebooted what seemed like a tired franchise, bringing in Chris Pine as James T. Kirk, Zachary Quinto as Spock, and Zoe Saldana as Nyota Uhura. Abrams directed the first two – “Star Trek,” from 2009, and “Star Trek Into Darkness,” from 2013. This time, his hands full with “Star Wars,” he’s back as producer; Justin Lin directs.

So what can we tell from the trailer? The main plot point shows Kirk stranded on a planet with neither crew nor ship, trying to figure out his way back. Besides that, it looks like there will be lots of dumb, smug humor pegged to explosions and other special effects. It all plays out over the Beastie Boys song “Sabotage,” which made an appearance in the 2009 “Star Trek” and which Spike Jonze’s immortal video turned into a ‘70s cop-show complete with bad mustaches. Nothing in the new “Star Trek” improves on those: This just looks like generic junk. (Iris Elba, who plays a villain, doesn’t show up in the trailer, sadly.)

What little we see of the dialogue comes mostly from the hall of action-movie clichés: “Well played!” one character offers. (Isn’t it time to retire that phrase yet?) When Pine’s Kirk falls abruptly onto a the floor of the ship, he breathes, “Okay, let’s never do that again.” As a character commences a fight scene: “Let’s hope this doesn’t get messy.” All that’s missing is a character yelling – after an abduction or similar catastrophe – “This isn’t my day!”

We’ve known for months now that Justin Lin – who helmed the last few “Fast and Furious” sequels -- would be directing. He has a following: The team behind “True Detective” brought him in to direct two episodes of the messy and misfired season two. But he still comes across like a hack who blows things up when he’s not sure where else to go.

Trailers obviously compress action and everything else into a small, tight space. So maybe the ensuing film will be a model of toleration and scientific speculation like the ‘60s television series.

Some viewers are pleased with what they’re seeing here. “The Trailer for Star Trek Beyond Promises a Return to the Spirit of 2009’s Star Trek,” says Slate’s Laura Bradley. Abrams and his crew certainly brought some pop culture mojo and a quicker pace to “Star Trek” with their first film. But that 2009 trailer, like the film itself, is largely about responsibility and making peace with the past: It hinges on Kirk committing to the tradition of his father – enrolling at Starfleet Academy, becoming less reckless, eventually taking over command of the Enterprise. Looking at it now, it seems a bit portentous and a little close to the journey Luke Skywalker took toward the good side of the Force. But it gave that movie some emotional reference points and a larger mythic structure.

The trailer for the new one, by contrast, shows very little at stake except a series of one-liners. Maybe the movie will be gripping, but this one has us wondering what else is opening in July — or if it’s not too late to drag Abrams back to direct the next one.