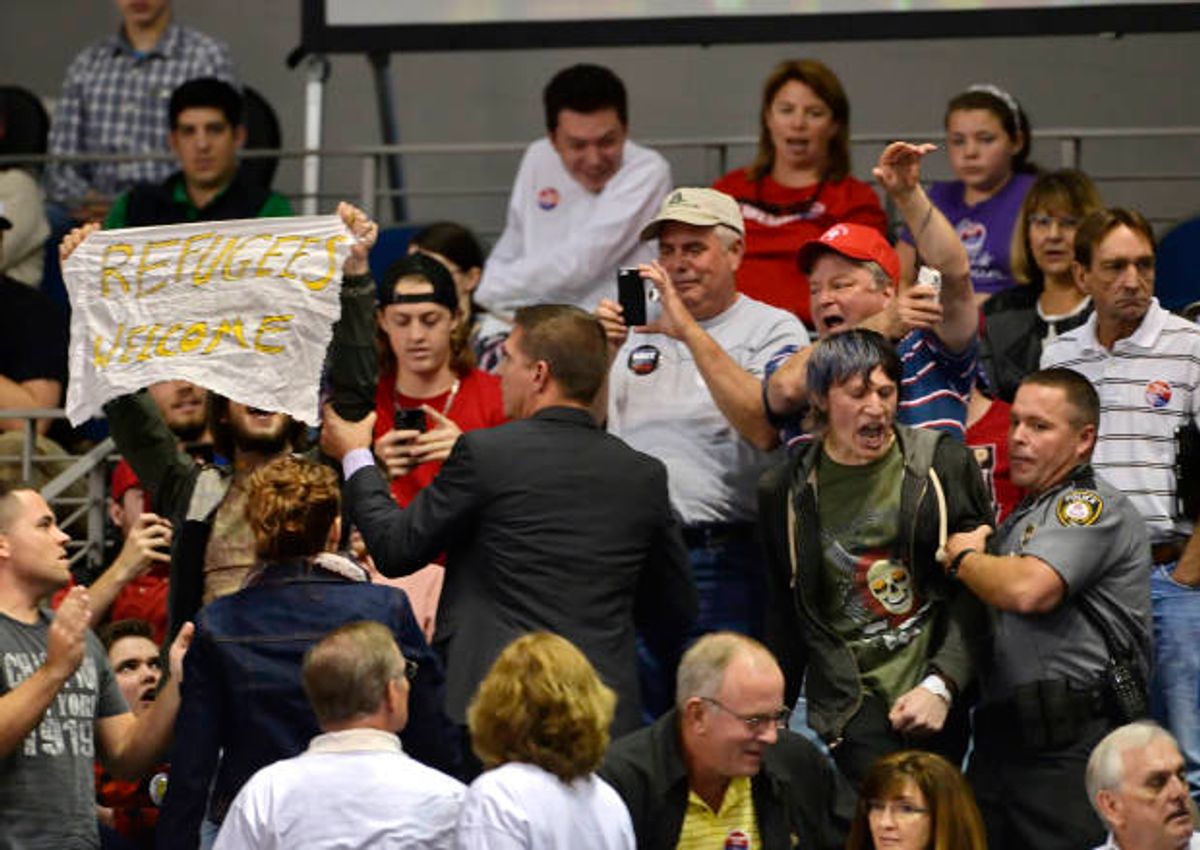 When chants of "Dump Trump" interrupted a Las Vegas Donald Trump rally on Monday night, the inflamed crowd was clearly ready to pounce on the interlopers.

“Take them out!” an elderly man repeatedly yelled at the protestors. “Kick his ass,” yelled another.

The commotion began when Trump brought a supporter on stage whose son had been killed by an undocumented immigrant. “I always ask people, what would you do? What would you do if an illegal alien in an 18th Street gang was released from the county jail you know and into our neighborhoods?” Jamiel Shaw asked the crowd. “We don’t know what’s going on. That’s why we need Donald Trump.”

“That’s why we need gun control!” one protestor with “Unity Vegas" shouted back. “If there were no guns he wouldn’t have got killed.”

“Black lives matter. Muslims matter," other demonstrators began as a chorus of boos began to drown them out.

“Shoot him!” someone yelled as the protestors were escorted out of the Westgate Las Vegas Resort and Casino. A large middle aged man shouted, “Sieg heil!” as the protesters were taken away.

"He's a Muslim!" another man screamed as a protester was removed, according to NBC News:

“Light the motherf—-r on fire!” another man can be heard shouting at a black demonstrator who sat in protest on the ground:

And about ten minutes into the Trump rally, this happens. pic.twitter.com/65pXHjsJ3x

“I heard ‘Hail Trump!’ several times as though it were a Nazi youth or Hitler Youth group meeting or something of that nature,” the "Unity Vegas" and Black Lives Matter protestor Ender Austin III told Yahoo News after being ejected from the rally. “I heard a lot of rhetoric that definitely put me in the mind of Nazi Germany, not 2015 America.”

Trump, of course, managed to keep it "classy" as his rally devolved, cheering the protestors' ousting with a "bye bye":

Eventually, about 10 demonstrators were escorted out of Trump's rally on Monday. Protesters told Yahoo News they planned more demonstrations for the Republican debate tonight.