Republicans, where the hell is your outrage?! Despite horrific rally video, GOP leaders won't stand up against hate and behavior of Donald Trump's supporters

Republicans used to stand up to the worst elements of their party, but now they are helpless to do anything 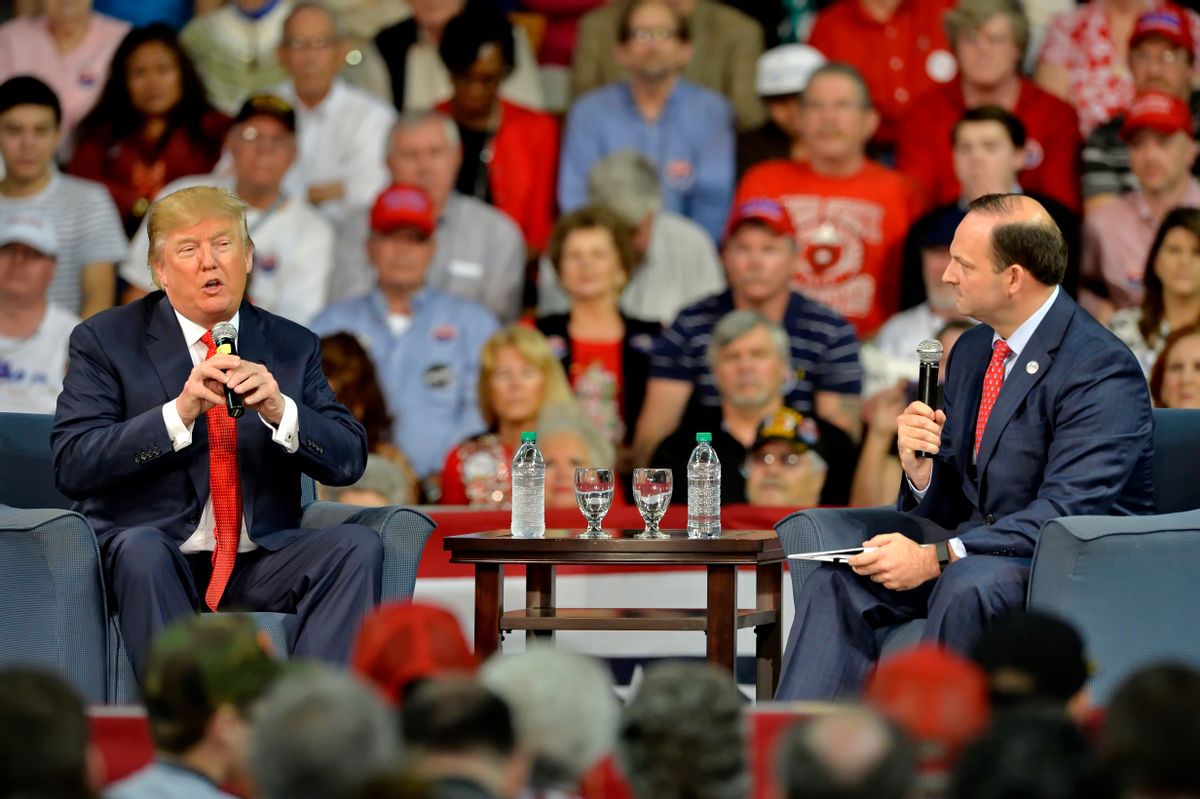 Are Republicans ever going to step up and take responsibility for reining in the worst elements of their party? At Monday night's Donald Trump rally in Las Vegas, Buzzfeed reporters caught a disturbing video of security piling up on a black protester while an angry Trump supporter yells, "Light the motherfucker on fire!"

This follows other incidents, such as an attack on a black protester at an Alabama Trump rally and two Trump supporters beating up a homeless man because they thought he might be an undocumented immigrant.  There's also been a surge in anti-Muslim hate crimes across the country, and while none have been directly connected to Trump, having the frontrunner of the Republican Party spouting off about bans on Muslims entering the U.S. can't be helping things.

Republicans have trafficked for decades in sowing white resentment for political gain, of course, but until now, Republican leaders had instituted some checks to keep the racism from getting too overt or violent. But now that practice seems to have disappeared.

George W. Bush may have exploited American ignorance about the size and diversity of the Muslim world in using 9/11 as a pretense to invade Iraq, but he also took pains to discourage hate at home. "America treasures the relationship we have with our many Muslim friends, and we respect the vibrant faith of Islam which inspires countless individuals to lead lives of honesty, integrity, and morality," Bush said in an Eid Al-Fitr speech at the Islamic Center of Washington, D.C. in 2002.

In a similar speech in 2004, Bush said, "Ramadan is also an occasion to remember that Islam gave birth to a rich civilization of learning that has benefited mankind." He was known to repeatedly emphasize a belief that most Muslims are "peaceful" and their faith is "peaceful," the kind of language that conservatives scoff at when it comes from President Barack Obama now.

Similarly, Sen. John McCain in 2008 stepped up to the plate while running for president  and pushed back against the overtly racist elements in his own party. The conspiracy theory holding that Obama is a "secret Muslim," a terrorist supporter and was hiding the truth of his birthplace had already taken hold in the party by then, and one woman at a forum asked McCain about it in October of that year. "He's a decent family man" and a "citizen that I just happen to have disagreements with on fundamental issues," McCain shot back, while also denying that Obama was, to quote the woman, "an Arab."

"Sen. Obama is a decent person and a person you don’t have to be scared of as president of the United States," he also said, even though the crowd booed him.

This isn't about giving Republicans of the past a cookie. They had repulsive policies, often rooted in racism. But there used to be a sense of going too far, and that sense seems to have evaporated completely.

Trump clearly has no intention of offering leadership on this front. As my colleague Chauncey DeVega pointed out, Trump's response in the past to racist violence done in his name has been chuckling and supportive. This fits in with Trump's general strategy, which I laid out last week, of simply pandering as hard as he can to the worst elements of his party, letting their bigotries lead the way.

But what is surprising is how little pushback you're getting from other Republican politicians. While other Republicans are critical of Trump's more asinine statements, you almost never see any candidate who is willing to speak out about the growing racism on the right, much less link Trump's statements to this violent, bigoted behavior. Having someone do what Bush or McCain did, which is openly ask conservatives to tone it down and be respectful of other people who are different, seems completely out of the question.

Same story with the conservative media, whose responses to this growing ugliness tend to range from ignoring it to making excuses for it. (Shepard Smith being the forever-struggling exception to the rule.) It's baffling. You would think that the conservative media and Republican establishment, both of whom want a more suitable candidate than Trump for the general election, would grab every opportunity they could to rein in the proto-fascists of their party and try to put forward a friendlier, more moderate face for their party going into such a crucial election.

The sad truth of the matter is that conservative leaders are scared. In the past, efforts from those on high to put a hard limit on how far the racism goes tended to be effective, but nowadays, the conservative base simple rebels against limits like a bunch of five-year-olds who are not going to take a nap.

To stand up against Trump or, more importantly, his out-of-control followers means that you will be summarily dismissed as a member of the "establishment" and probably a secret liberal. The Man is trying to get them down with all this political correctness, dude, and conservatives aren't going to take it any longer. Conservatives used to, however begrudgingly, accept instructions to keep a lid on the worst excesses, but these days, the zeitgeist is to let it all hang out.

What changed? It's easy to blame Trump, of course, but that would be wrong. If you watch that video of McCain chastening his supporters in '08, you can see that the shift was already underway. The crowd boos McCain, loudly, for asking them to be a little less unhinged. They aren't in full rebellion yet, but things are definitely heading that way.

In the past seven-and-a-half years, the conservative base has been practicing its skills at deflecting any attempts by conservative leaders who want to calm them down. Now they are the ninja masters of rationalizing their stupid beliefs in the face of any evidence to the contrary.

David Weigel at the Washington Post recently sit in on a focus group, run by the conservative media mastermind Frank Luntz, of Trump supporters, and what he discovered was that these folks can dodge and weave and block criticism like nobody's business.

Participants derided the mainstream media, accusing reporters of covering snippets of Trump quotes when the full context would have validated him. They cited news sources they trusted — Breitbart News was one example — to refute what they were being told.

“You know what Trump does?” said Teresa Collier, a 65-year-old retiree. “He says something completely crazy, and I’m like, ‘Oh, my God!’ Then he dials back and starts explaining it and saying how he’d do it, and it makes sense.”

Every criticism of Trump was deflected with accusations that the critics were just being haters. Sarah Palin, for instance, pulled a similar stunt as the focus group attendees, insisting that the negative reaction to Trump's call for a Muslim travel ban was "knee-jerk" and the result of not letting him "finish the conversation."

Offering leadership and modeling better behavior just doesn't work on the conservative base any more. They're just going to scoff at you like you're a parent trying to trick kids into eating broccoli by putting some cheese on it. So while it's distressing to see Republican leaders just stand by, twiddling their thumbs while things spin completely out of control, it's also hard to deny that anything else they could do would probably just make it worse. Look at what happened to John Boehner, after all. Even the slightest hint that he might try to moderate his party's worst tendencies resulted in him being tossed out on his ass. That's just how they roll these days.

Why? The reasons are probably complex, but lately, one of the biggest factors seems to be that the conservative base feels they have nothing to lose anymore. Most of them are getting on in years and they've been voting for Republicans for decades and yet they continue not to win the culture war. If anything, they're losing: Gay marriage is legal, we have a black man as president, single women keep having sex, and the country keeps getting more racially diverse.

They've tried it the other way, where you bundle up your bigotries in coded language and try to present a softer, gentler face to the world. It didn't work. So now you've got a huge chunk of conservatives backing Trump and flashing the Nazi salute at anyone who looks at them askance for it. It's a temper tantrum many years in the making, one that Republican leaders are helpless to stop.