Trump wants people to think he'll be tougher on terrorists than anyone else. Democrats should expose his charade 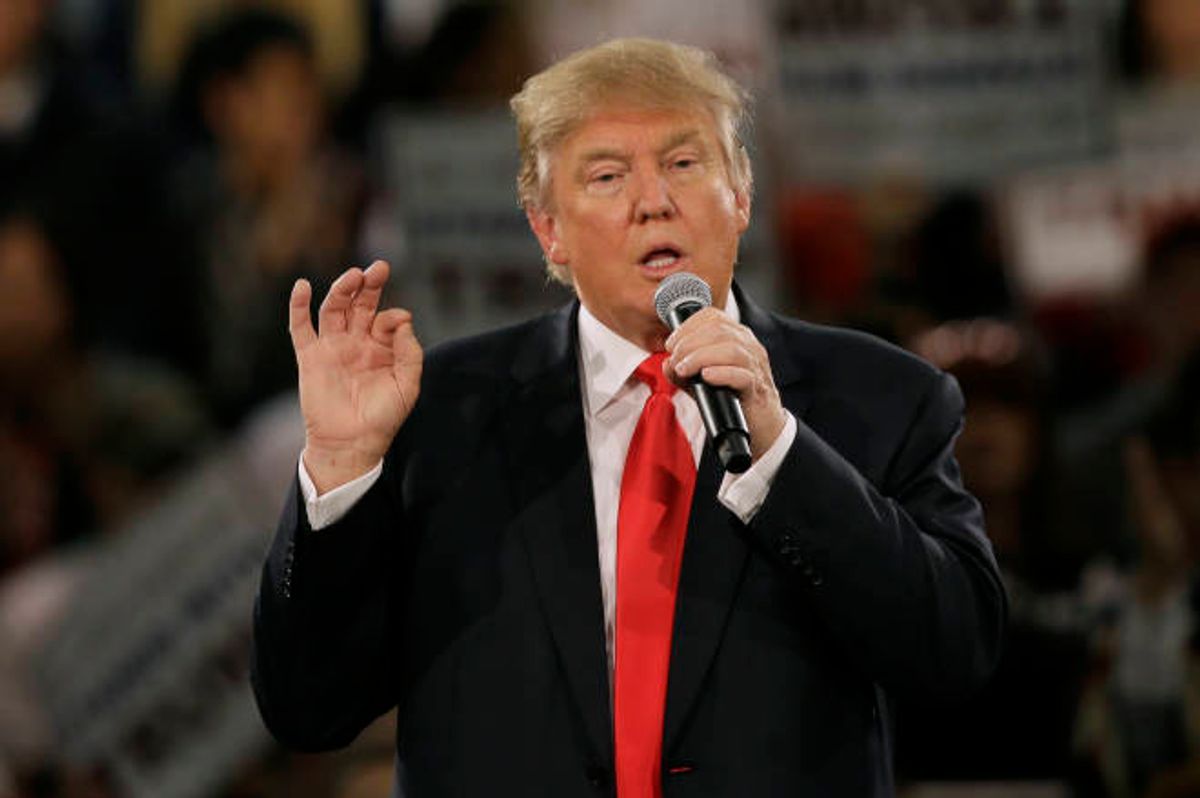 As most observers of U.S. politics spent their Tuesday morning worrying over news that yet another Donald Trump event had nearly disintegrated into mob violence (this time, with cries of "Sieg Heil!" included), two of the more prominent non-Christian figures within the Democratic Party unveiled their new plan to wrest the zeitgeist from the Donald's clutches.

The idea, which was proposed by Rep. Debbie Wasserman Schultz (Jewish) and Rep. Keith Ellison (Muslim), and which was reported on by The Washington Post's Greg Sargent, is at once elegant and simple. In the interest of showing that the majority of Americans — and the vast majority of the American establishment — rejects Trump's Islamophobia, these two Democrats urged lawmakers from both parties to bring a Muslim-American guest with them to next year's State of the Union.

The goal, they explained in a letter, would be to let Muslims in the U.S. and across the world know that Americans stood in "solidarity" with their Muslim fellow citizens; that they would "not be intimidated by fear into discrimination." By extending the honor and prestige of a State of the Union invite to Muslim-Americans, they said, Congress would send a strong rebuke to the "shameful," "offensive," and "outrageous" Islamophobia being spouted by Trump, which has likely led to an uptick in anti-Muslim violence.

As I said, I think it's a great (and very American, in the Norman Rockwell sense) idea. I hope everyone in Congress does it. But while Sargent is right to note in his report that most Americans do indeed reject Trump's lizard-brain proposals, he's also right to note that this view is not evenly distributed. According to a recent WaPo poll, nearly 60 percent of Republicans support Trump's idea to ban Muslims from entering the country, which 60 percent of all Americans oppose. And while no other Republican presidential candidate has entirely co-signed Trump's idea, they haven't castigated it much, either.

If the goal is to use one of the country's most hallowed bits of political theater to stage a giant #notallAmericans action, however, then this will definitely work. What it won't do, though, is matter one lick to someone who either likes what Trump is selling, or is Trump-curious. Obviously, we should consider the former group beyond our reaching. But that second group, which will no doubt include many of those who tell pollsters they're extremely fearful of an impending terror attack, are probably not a lost cause. At least not yet.

Calling on people's sense of decency and humanity is important, don't get me wrong. But if Trump's opponents want to cast as wide a net as possible, then I'm going to offer a slight variation on some (unsolicited) advice I offered previously, which is to attack Donald Trump's strengths. That advice pertained to how his Republican challengers can try to defeat him; but the thrust of the argument holds here, too. In this case, Trump's appeal is that he seems "tough," and that he isn't afraid to do whatever it takes to protect Americans. What his opponents should do, then, is reveal the lie behind that image.

To some degree, Ellison and Wasserman Schultz's letter already does just that. I'm thinking of the line about Americans refusing to be "intimidated by fear into discrimination," in particular. Rather than make a humanist, high-brow argument, Trump's opponents could portray him as, well, a hysteric and a wuss. They could argue that real toughness and real American backbone doesn't ask "how high?" when terrorists demand we jump. They could say that if we followed Trump's lead, the terrorists could make us do whatever they want.

Is that approach foolproof? No, of course not. There would be a risk of making your intended audience feel as if you were dismissing their understandable and profound fears. But if people are afraid, they're generally not going to find appeals to their better angels persuasive. They don't want to be a liberal's definition of a "good" person; they want to be safe. And it's a cardinal rule of conventional politics that you've got to meet people where they are, not where you want them to be. (In some sense, that's been the toxic genius behind Trump's whole campaign.)

So, yes, bring Muslim-Americans to the State of the Union. Do everything you can to show the world that Trump speaks for a minority, and that most Americans have not gone feral with anxiety, fear, and hate. But go after Trump where he lives, too. Point out that his "strength" is a thin veneer on top of a tangled mass of unthinking terror; argue that his approach is, on a fundamental level, a sign that he's weak. Because not only is that likely to make more effective politics, but it has the virtue of also being the truth.