Let's look behind the sound bites. What the major candidates said last night, and what they really meant 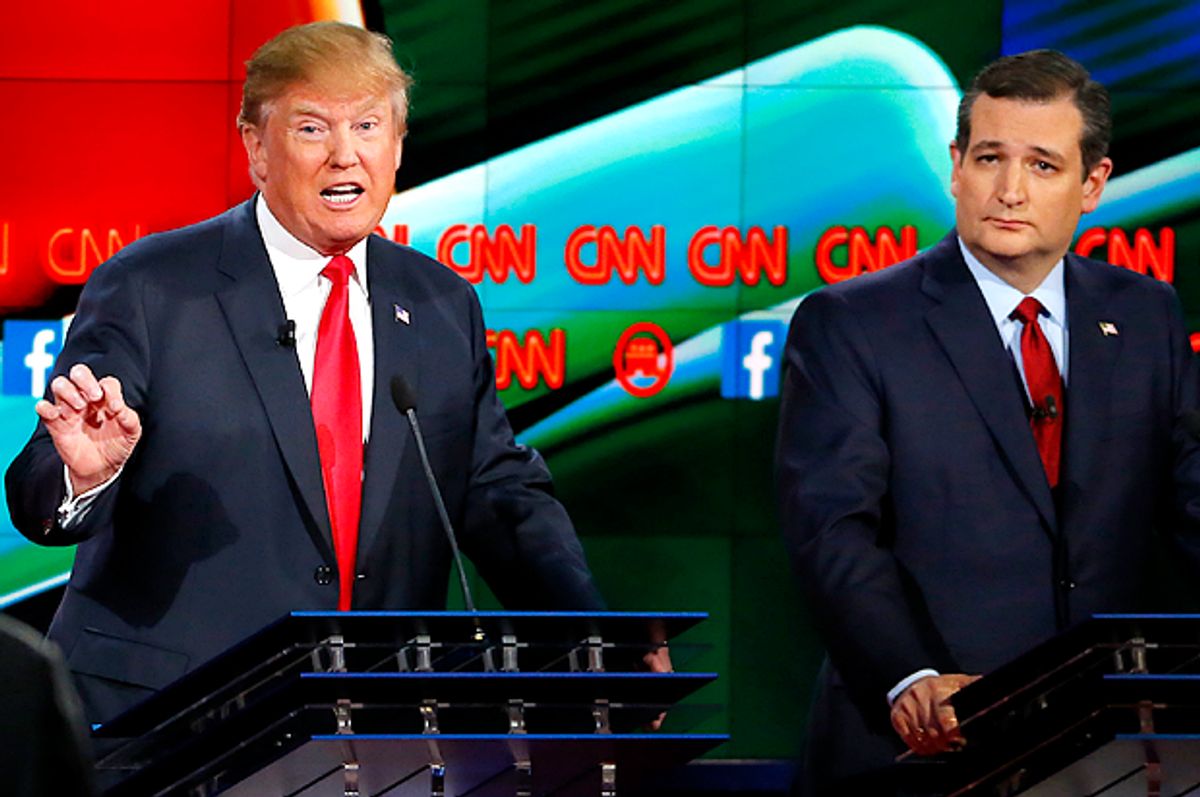 We learned a lot of things in the Republican's Las Vegas debate last night – including the fact that “Barack Obama and Hillary Clinton” have now been forged into a single lexical unit by an RNC that, in a messaging strategy seemingly ripped from Meredith Wilson’s score for The Music Man, wants to insist that “Clinton” starts with a “C” and that rhymes with “B” and that stands for “Barack Obama's foreign policy failures.”

But in addition to that snappy refrain, the debate yielded a number of other useful findings that – in the spirit of holiday giving – have been concisely summarized for you here. These paraphrases, though inexact, capture the spirit of the candidates in his or her finest moment during the debate.

Jeb Bush: “All we need to do to win in the Middle East is make sure we create stability. It’s really that easy.”

Jeb Bush showed that although he’s worried about what’s happening in the Middle East, he’s not exactly sweating it. The trick is actually quite simple: you just need to go in there and create some stability, he said. This led everyone watching the debate to wonder what, exactly, the Bushes talk about at their family gatherings if not the problems that they’ve been having at work.

Ben Carson: "Yeah, so there might be people radicalizing at the supermarket. We should probably look at all the places where that sort of thing might happen."

When it comes to stamping out radical, violent ideology, we can’t just look at mosques, explained Carson, seeming quite reasonable for all of a split second. No, he explained, breeding grounds for terrorism are all over the place – including your local Wegman's, Safeway or Kroger store. Next time you’re there, don’t just hunt down bargains and fresh produce: see if you can hunt down some of ISIS’s Twitter followers while you’re at it.

Ted Cruz: “The reason we haven’t yet defeated ISIS is because we’re too politically correct.”

Carly Fiorina: “What’s my strategy for defeating ISIS? Well, I once led a company.”

When Carly Fiorina wasn’t bragging about how innovative Hewlett-Packard is (leading many in the audience to wonder if she was talking about the same Hewlett-Packard that we know – that company that made your grandmom’s beige desktop computer), she retreated to her credentials, and, as she’s done before, she seemed to be reading from her driver’s license and resume. She’s a woman, she explained, which means she certainly won’t have to deal with conflict or disagreement when it comes to deploying our military might. And on top of that, she ran a company, which means that she … you know … can run things.

John Kasich: "Why were those nancyboys in Paris meeting to talk about climate change!? They should have been talking about ISIS instead."

There was little talk of climate change last night – other than to casually deny its importance, of course – but John Kasich showed he’s been following the issue by referencing the recent United Nations Climate Change Conference in Paris. But, he explained, the talks were a big waste of time. Instead of talking about climate change, those folks should have been huddling up to come up with an ISIS strategy. But heck, I mean, maybe some voluntary guidelines could tackle religious extremism, too?

The generally cool-tempered Rand Paul got his biggest reaction from the audience when he attacked Chris Christie for his hawkish ambitions, even making an amusing – though ultimately bankrupt – comparison between Bridgegate and deploying boots-on-the-ground military force against ISIS. He also implied … well, actually stated … that a vote for Chris Christie means a vote for World War III.

Marco Rubio: “Yeah, I mean, eventually illegal immigrants could apply for a green card. I guess.”

As a right-winger but also the son of immigrants and a Floridian, Marco Rubio is between a rock and a hard place it comes to laying out an immigration policy. Asked if he would allow undocumented immigrants to seek citizenship, he demurred, explaining various steps in a process for dealing with the problem: more border agents, more links in the border fence, more tracking and verifying, and so on. When CNN’s Dana Bash pointed out that he hadn’t actually answered her question, he shrugged his shoulders and said that, well, assuming his plan worked out and assuming people followed all the steps in his process, sure, he’d let them submit a green card application. Or at least, he’s open to it.

Donald Trump: “Wouldn’t it be cool if we could make it so ISIS can’t use the Internet? Aren’t there some smart people around somewhere who could make that happen?”

Yes, Donald Trump’s approach to tackling ISIS is multi-pronged, and one of those prongs is to control their lines of communication. Now, he’s not quite sure how it would work to make sure that jihadists in the Middle East can’t use the Internet, but he feels strongly that smart people here at home could figure out how to do it. I mean, right?

Kurt Sampsel earned a Ph.D. from Carnegie Mellon University, where his research focused on the political battles surrounding the control of mass media in the United States