GOP sexism on fire: The renewed War on Terror allows Republicans to let their inner misogynist caveman come screaming out 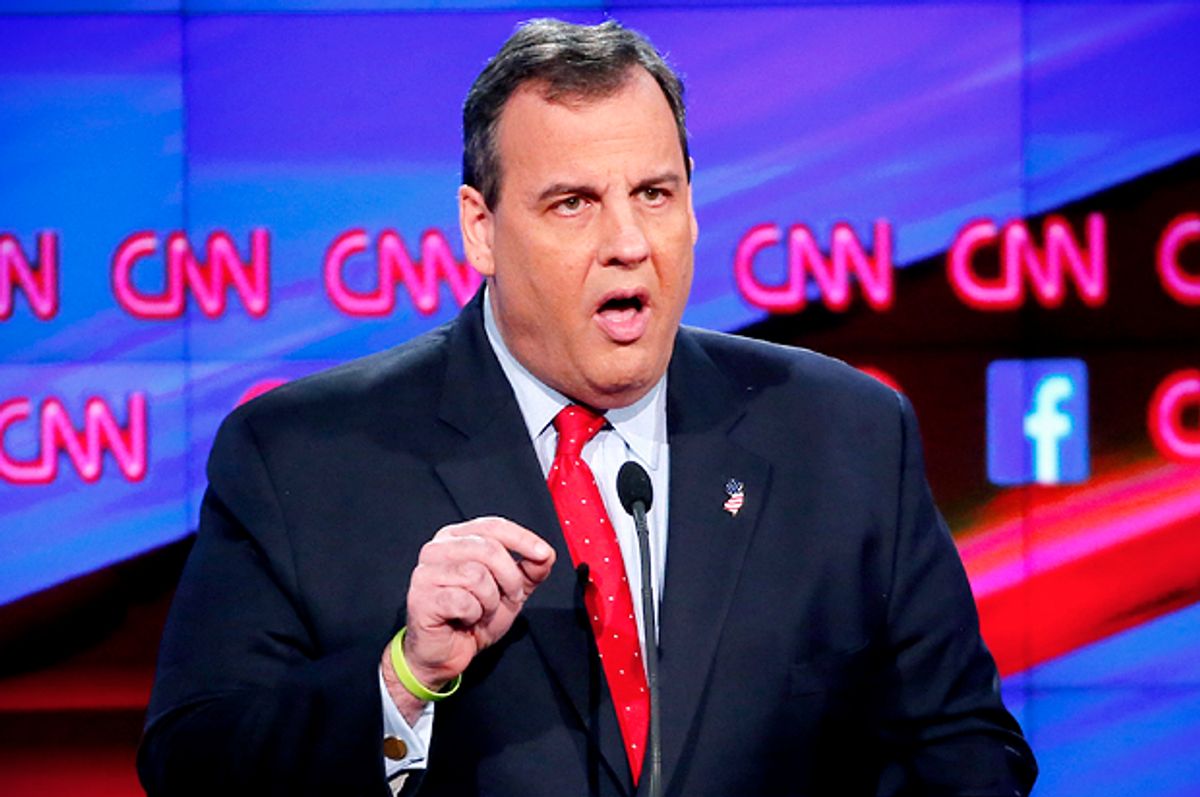 Ever wary of the "war on women" charge, Republican presidential candidates this year have been mindful to keep up the pretense that they aren't sexist and certainly do not have massive hang-ups about gender, no sir. They haven't always been successful — check out this Mother Jones supercut of Republican candidates acting condescending towards women during the debates — but, except for a couple of outbursts from Donald Trump and Mike Huckabee's "take my wife please" schtick, the pretense of non-sexism has been maintained.

But that was before the reigniting of the War on Terror, sparked by the Paris and San Bernardino attacks. Republican excitement over the chance to demagogue about how we're all going to die was palpable during Tuesday night's CNN debate. The candidates didn't even bother to conceal their glee at having an opportunity to play at being caveman, bragging about how they were going to beat their vaguely defined enemies with very big sticks.

Terrorism isn't just an excuse to let the war braggadocio out, though. Being big caveman also means giving up the pretense that you think women are equal. Wallowing in retrograde fantasies of masculine toughness and feminine weakness was the order of the night, for both politicians and pundits. If any of you feminists dare say boo about it, they will no doubt be happy to remind you that this is WWIII we're facing. No time for your fancy ideas about women's equality when there's a war going on!

Chris Christie set the tone of the evening during his opening statements, which focused on the bomb threat that shut down Los Angeles schools, a threat which Christie treated with the utmost seriousness, even though the threat, which had a dick joke in it, was obviously a hoax.

A touching image indeed. I dabbed my eyes with my apron while hearing him talk before resuming my daily vacuuming duties.

Having a bunch of middle-aged men spending three hours boasting about how manly-tough they are like a bunch of teen boys at a skate park trying to pretend they aren't virgins? Couldn't be more appropriate. Simply noting that you're a woman? Gross. No one wants to hear that. After getting dog-piled for awhile about it, Deace, manly man that he is, offered a simpering non-apology, apparently after being browbeaten by his mommy-wife, about his use of naughty words to refer to lady parts that no good boy should ever think about.

. @amydeace tells me while on point about Carly and gender card I was too vulgar and need to apologize. And my wife is ALWAYS right. So I do

Women: They may not be tough enough to fight scary terrorists, but they sure are experts at nagging!

Deace was far from the only pundit who, all hopped up on the terrorism excitement, was eager to slap those uppity women for daring to run for president. During the pre-debate Fox News coverage, Andrea Tantaros, whose schtick on Fox is being the Cool Girl who understands that women will forever be inferior, went after Hillary Clinton.

"She is going to cry though,"  Tantaros speculated in response to a question about whether Trump would insult Clinton during the debate. "She's going to cry, she's going to hope Trump goes out from the podium, insults her so she can cry and be the victim."

Implying that women are too weak to be leaders, while also dismissing women's tears as nothing more than a petty attempt to manipulate men? It's a misogyny two-fer, and explains why Tantaros continues to be a star at Fox News, the channel for men with issues.

Things were not better during the undercard debate, when Rick Santorum was asked if he was really serious about his plan to reverse a recent decision allowing women to serve in combat roles in the military. While refusing to come right out with a yes-or-no answer, Santorum made it quite clear that he believes women are incapable of handling the duties of combat positions.

George Pataki pushed back, pointing out that women have to pass the same standards as men to get into combat positions, but clearly his common sensical belief that there's more to the military issue than saying, "Me big man, you little woman" was not the winning argument of the night.

Under the circumstances, it's no surprise that things devolved into an embarrassing mansplaining situation late during the main debate, when a UT Austin student named Carla Hernandez asked, "If the Bible clearly states that we need to embrace those in need and not fear, how can we justify not accepting refugees?"

"What I say to Carla is that the first job of the president of the United States is to protect your safety and your security and the security and safety of your family," Chris Christie answered, turning the condescending papa act to maximum volume.

"You know, obviously, as president of the United States, we've got to keep the people safe," John Kasich echoed.

Never mind that Hernandez specifically noted the Bible's instructions to "not fear" when offering help, much less the ridiculousness of all these tough-posing men acting like a bunch of war refugees are scary supervillians out of a comic book. Actually listening to a woman's question and answering it instead of talking to her like she's a child you're tucking into bed is clearly beyond these men.

The evening's entire display of trying-too-hard masculinity and condescension towards women would have been offensive, it wasn't so embarrassing. At this point, Hillary Clinton doesn't even have to show her face to make you long to put her in the White House.