Can an election in which fewer that 1 percent of eligible Saudi women voted be called a victory? 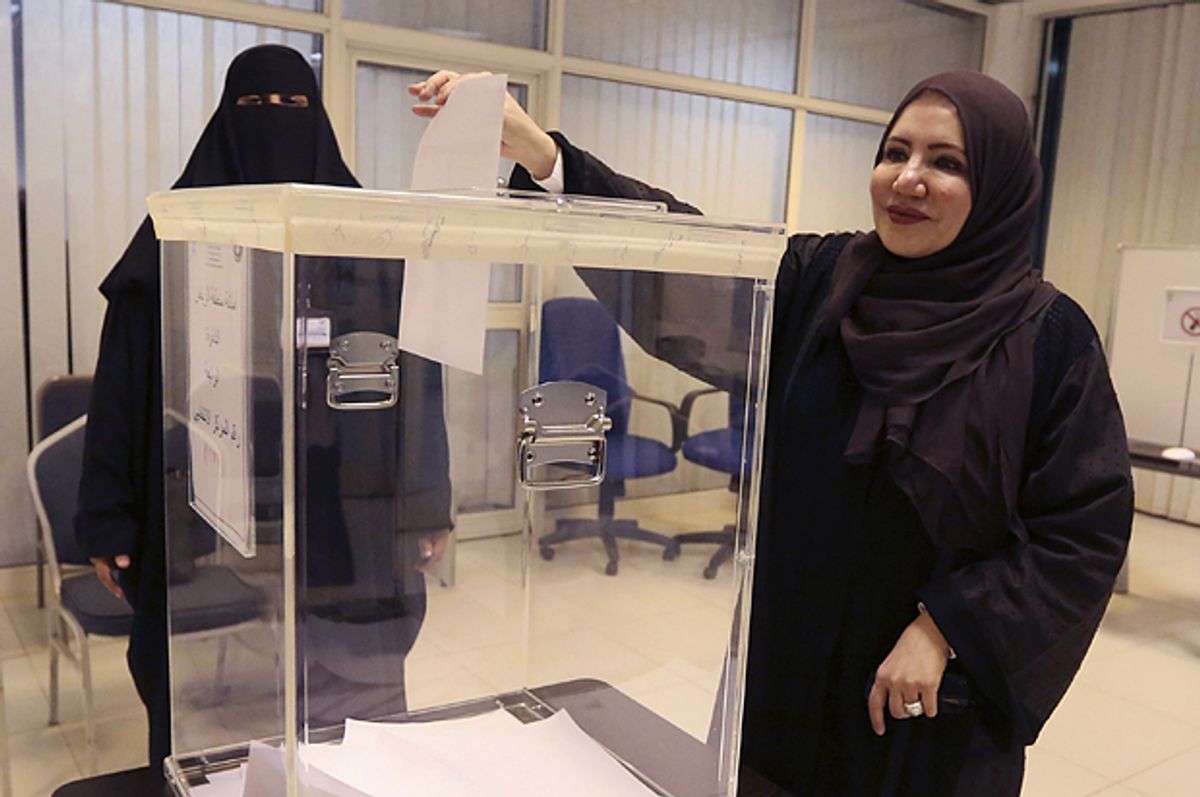 The global press has been heralding the December 13, 2015, vote in Saudi Arabia as a breakthrough for women, since it’s the first time in history that Saudi women have been allowed to vote. But is this vote really a significant step forward?

First let’s consider the Saudi electoral system within the context of an absolute monarchy. The ruler is always a male and inherits his position. All powerful government positions from ministers to governors are appointed by the King. The 150-member Consultative Council, known as the Shura Council, is also appointed and has only advisory power.

The recent election was not for any body with legislative power. It was for municipal councils that merely provide advice to government authorities about local services such as parks, road maintenance and trash collection. And one-third of these council seats are appointed, not elected.

This election marks only the third time in the nation’s history that Saudis—men or women--have been allowed to vote, and the first time women have participated. While heralded overseas, back at home, voting for municipal councils is greeted with a big yawn.

Instead of just profiling the handful of female winners, the press should really be talking to the 99 percent of women who didn’t vote. They would find that some women didn’t vote because they found the process complicated or they couldn’t get to the segregated polls, since they are not allowed to drive. They would find that some didn’t feel it was worth their time, since the councils have so little power. And they would also find some women didn’t vote because they were boycotting the election.

“How could I be elected if I can’t drive, if I can’t have the right to custody of my children, when so many issues touching our daily lives aren’t resolved?... Women are half citizens in this country,” said university lecturer Aziza al-Yousef. “I think we need to change the whole system.” Al-Yousef is one of the few Saudi women brave enough to speak out in a country where voicing opposition can land you in prison, but her views reflect the attitudes of many.

Saudi women are still trapped in a male guardianship system under which all women are treated as minors. They are not allowed to marry without the permission of their guardians; unlike men, they do not have a unilateral right to divorce and often face discrimination in relation to child custody.

Women cannot obtain a passport or travel without the approval of a male guardian, usually a husband, father, brother or son. Enrollment in education, at all levels, requires a guardian's permission. A woman can't be released from rehabilitation or prison to anyone but her guardian; if the guardian refuses to accept the woman, as often happens, she remains imprisoned.

Saudi men can have up to four wives and there is no prohibition against child marriage. A push by human rights activists to make it illegal to marry girls under 15 years old was crushed by the Grand Mufti. A prominent cleric and member of Saudi Arabia’s highest religious council, Dr. Salih bin Fawzan, said that girls can be married “even if they are in the cradle.”

Schools are segregated and although Saudi women have made great gains in education—they now comprise 60% of the nation’s college students—women are less than 20%  of the labor force. Employers often require male guardians to approve the hiring of female relatives and most women are confined to jobs considered “appropriate” for their gender, like healthcare and education.

The Saudi government even tells women what to wear. In public places, women must hide their hair and cover their everyday clothing with an abaya, a thick, opaque and loose-fitting cloak that does not show off their bodies.

Saudi Arabia remains the only country in the world where authorities bar women from driving; even the most extreme interpretations of Islam by ISIS do not ban women from driving. Women who have challenged the driving ban have been imprisoned, fined, suspended from their jobs, banned from traveling, and even threatened with terrorism charges for public incitement.

In a system still characterized by entrenched patriarchy, voting for municipal council seats might seem like progress, or simply window dressing. “The Saudi government is using women’s participation to its advantage, but so must Saudi women," said Saudi scholar Hala Al Dossari. “We have to seize opportunities whenever they arise. It’s not like this vote is going to make significant change, but maybe it will inspire more women to keep pushing for greater rights.”

One of the positive things to come out of this election is more global attention on the heavy-handed rule of the Saudi monarchy. An upcoming activist-based Saudi Summit, which will be held in Washington, D.C., March 5-6, is an effort to build a campaign to support Saudi human rights activists. Saudi women have long been fighting for more rights, and their allies abroad should do more to support their efforts and break the cozy ties between the U.S. and Saudi governments.

Medea Benjamin is cofounder of Global Exchange and CodePink: Women for Peace.