The bizarre, rage-filled spectacle of another GOP debate: Why Republican militarism has never been so incoherent

None of the other candidates even tried to take down Trump. Instead we got violent military one-upsmanship 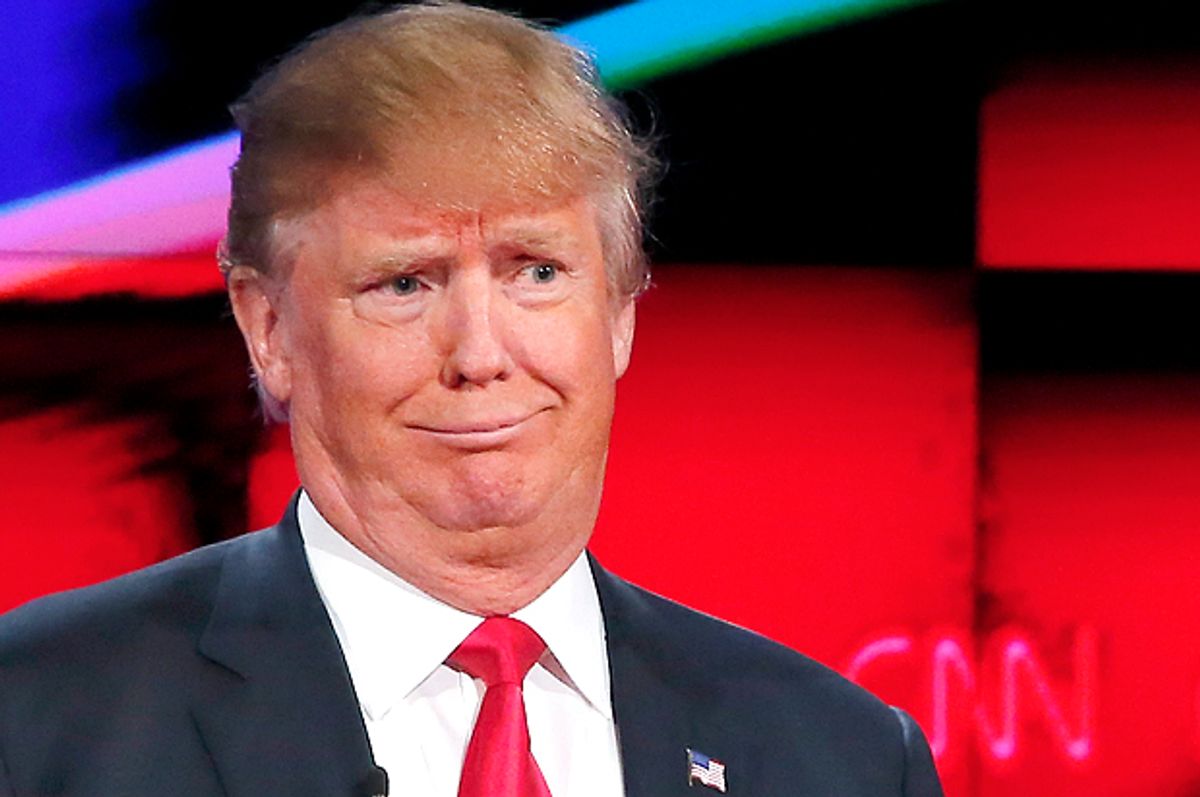 As I predicted yesterday, last night's Republican presidential debate was a bloodthirsty display of macho aggression not seen since well ... the last Republican presidential debate. Rather than gory descriptions of fetal mayhem and immigrant rapists, last night's afffair was almost exclusively focused on the threat of ISIS, with a few shots at Putin and Iran just for good measure. It was nasty, brutish and seemed like it lasted for days.

The undercard debate was more abstract performance art than a political debate, with a histrionic Lindsey Graham just letting his freak flag fly, appearing several times to be close to a breakdown, he was so frustrated at his inability to convince the nation that the terrorists are coming to kill us all. In what was the oddest moment of a very odd event, Graham told the tale of an American Muslim soldier in Kabul whom he accompanied to a polling place in the Afghan elections where they "cried like babies" together.

Rick Santorum declared World War III, Mike Huckabee wants the government to infiltrate mosques, George Pataki wants Silicon Valley enlisted in the fight and there was a lively discussion about whether Islam is "different" and whether it shouldn't be covered under the First Amendment.

Donald Trump was the main event, as expected. He's the frontrunner and he's set the parameters for the debate with his various proposals over the course of the campaign to "do certain things that were frankly unthinkable a year ago.” He reiterated his call to kill the relatives of terrorists, at one point even petulantly bellowing "so they can kill us but we can't kill them?" He also proved that he had no idea what the "nuclear triad" is and suggested that you can "shut down certain areas" of the internet, promising to get the best people to work on the problem. In other words, Trump was Trump, articulating every absurd impulse that passed through his mind.

Nobody laid a glove on him. In fact, they didn't even really try. It's as if these other presidential candidates look at him and see an alien from another planet and have absolutely no idea how to deal with it. Rand Paul weakly pointed out that Trump's proposals were probably unconstitutional, and Jeb Bush said he couldn't "insult his way to the presidency" (after which Trump roundly insulted him). Mostly they all just sparred ineffectually with one another leaving Trump untouched.

It's rather shocking when you think about it. On the stage were three sitting senators, one former and two current governors, all of whom had more knowledge and experience than Trump and it didn't seem to matter. The entire event was an exercise in who could make a more bellicose pronouncement of martial aggression than Donald Trump. Not that they agreed on what should be done, mind you. They bickered among themselves about whether or not Assad had to go and whether we should put "boots on the ground". Allegedly reasonable mainstream candidate Chris Christie upped the ante with promises to shoot Russian planes out of the sky while the old guard establishment pol John Kasich said he thought it was long past time we "punch Russia in the nose." With the exception of Rand Paul, who confined his militant rhetoric to keeping our borders closed to foreigners, they all agreed that more war in some form is absolutely inevitable. If people in other countries were watching they must have been terrified by what they heard.

The Ted and Marco Show wasn't nearly as exciting as the pundits predicted. Cruz and Rubio accused each other of lying about their records on immigration and government surveillance and it's likely that nobody cared much. It's hard to imagine that Rubio's charges that Cruz is a squish on immigration will stick -- that's the rap on Rubio and the entire world of right wing radio is undoubtedly going to be screaming about it tomorrow. His accusations that Cruz is weak on national security due to the fact that his hawkishness is less than comprehensive could bite, but Cruz sounds so hostile and angry about everything that it's hard to know if people would actually believe that about him.

The fact is the two candidates at the top of the polls, Trump and Cruz, may be bloodthirsty right wingers but it's interesting that they are both somewhat unorthodox when it comes to war in the middle east. Where Rubio, Christie and Bush are typical GOP hardliners, Cruz takes a more nuanced approach while Trump is downright eccentric. It's hard to imagine many Democrats saying what he said last night much less the leading candidate for the Republican nomination:

"We have spent $4 trillion trying to topple various people that frankly if they were there and if we could have spent that $4 trillion in the United States to fix our roads, our bridges and all of the other problems, our airports and all the other problems we have we would have been a lot better off I can tell you that right now. We have done a tremendous disservice not only to the Middle East but to humanity, the people that have been killed, the people that have been wiped away and for what? It's not like we had victory. It's a mess. The Middle East is totally destabilized, a total and complete mess. I wish we had the $4 trillion or $5 trillion."

Nobody challenged Trump when he said this. Nobody's head exploded. The moderators didn't fall off their chairs.

Trump supporters often tell reporters that he's saying what they're thinking. And that's usually not a great reflection on those people considering what's coming out of his mouth. But if, underneath all this saber rattling and bombastic jingoism, they're actually thinking this then perhaps there's some hope for the GOP yet.