The GOP debate fear cauldron: According to the Republican candidates, you're going to die

The GOP debate was about whipping up public anxiety over terrorists, who are apparently seconds from murdering you 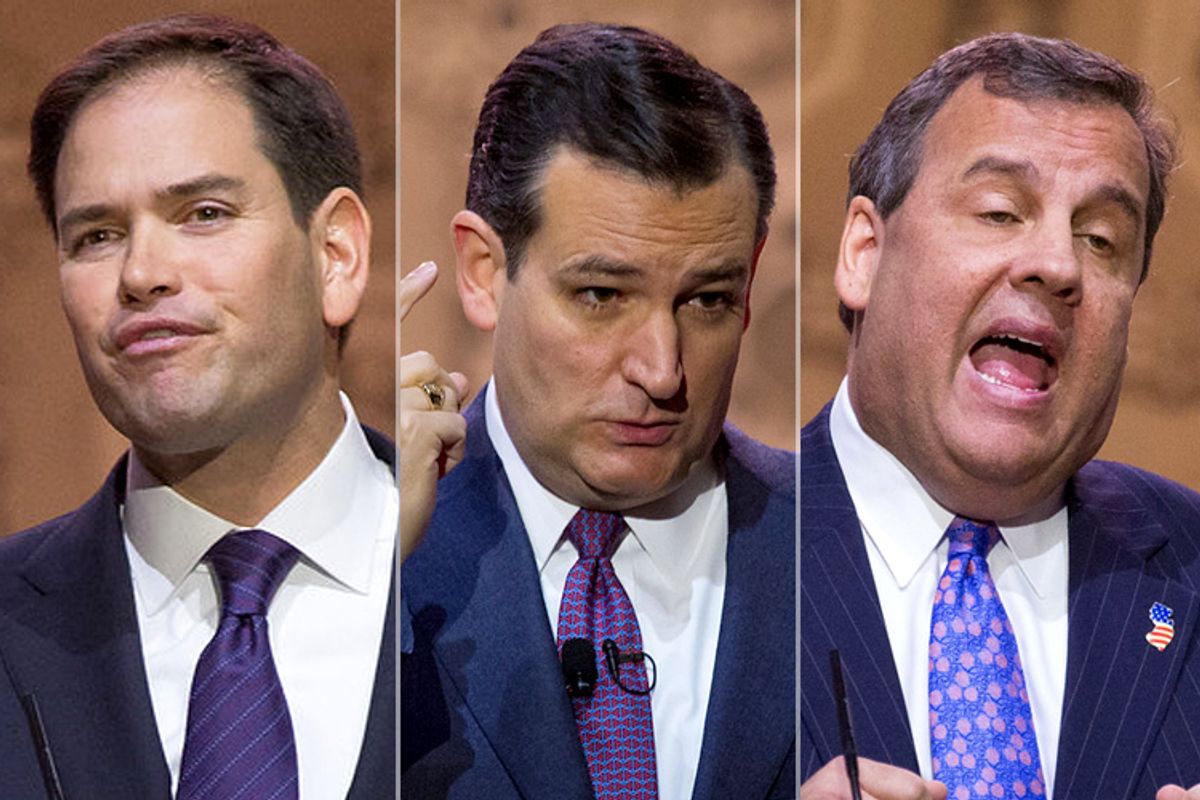 Tuesday night’s Republican presidential debate was the first since the Islamic State-inspired terrorist shooting in San Bernardino, California, and not surprisingly, most of the questions tossed out by CNN moderators dealt with national security and terrorism. In the days since San Bernardino, public fears over terrorism have grown, and President Obama has been doing what he can to tamp down anxiety and encourage people not to give in to the fear that terrorists work to inspire. But as the CNN debate made painfully clear, the Republican presidential candidates have quite the opposite goal in mind: They want everyone to be scared witless by the looming terrorist menace and worried that they will be the next to die.

New Jersey Gov. Chris Christie, back on the main stage thanks to CNN’s expansive inclusion rules and his own improved poll numbers in New Hampshire, did the most to actively scare the shit out of every person unfortunate enough to be watching. In his opening statement he announced that “America has been betrayed” by “the leadership that Barack Obama and Hillary Clinton have provided to this country.” As proof of that betrayal and treason, Christie pointed to yesterday’s closing of the Los Angeles Unified School District “based on a threat.” He never got around to mentioning that the “threat” had long since been revealed as a hoax. But still Christie was worried about the “children filled with anxiety,” and the “mothers who will take those children tomorrow morning to the bus stop,” and the “the fathers of Los Angeles, who tomorrow will head off to work and wonder about the safety of their wives and their children.” They live in terror, these nameless gendered stereotypes, because Obama couldn’t protect them from the threat posed by “madbomber@cock.li.”

Asked what he would do to ensure that fear does not “paralyze” American in the aftermath of terrorism, Christie explained that paralyzing fear is, unfortunately, “the new normal under Barack Obama.” “Everywhere in America is a target for these terrorists,” he said, giving everyone a reason to be afraid always. Christie’s closing statement was a riff on 9/11. “Many of our friends and others in our neighborhood lost their lives that day.” Christie even offered himself as a menacing presence, leaning forward and shifting back and forth behind his lectern like a rhinoceros sizing up a Jeep full of safari tourists. His message all evening was blunt and terrifying: you will die, unless you vote for me.

Not far behind Christie was Sen. Marco Rubio, who made a point of spelling out in detail the menacing nature of the Islamic State. “This is the most sophisticated terror group that has ever threatened the world or the United States of America,” he warned. “This is a very significant threat we face. And the president has left us unsafe.” He made a special point of noting the Islamic State’s sophistication: “This is a radical jihadist group that is increasingly sophisticated in its ability, for example, to radicalize American citizens… This is not just the most capable, it is the most sophisticated terror threat we have ever faced.” He warned about “the next time there is an attack on this country” while pushing for reinstatement of metadata collection provisions in the Patriot Act.

Sen. Ted Cruz went a slightly different route, linking Republican panic over Syrian refugees to both the San Bernardino terrorist attack (which had nothing to do with refugees) and the 2013 Senate immigration reform bill to score a bank-shot hit on Rubio:

CRUZ: Because the front line with ISIS isn't just in Iraq and Syria, it's in Kennedy Airport and the Rio Grande. Border security is national security. And, you know, one of the most troubling aspects of the Rubio-Schumer Gang of Eight Bill was that it gave President Obama blanket authority to admit refugees, including Syrian refugees without mandating any background checks whatsoever. Now we've seen what happened in San Bernardino. When you are letting people in, when the FBI can't vet them, it puts American citizens at risk.

All in all it was a grim, bleak, and frightful debate that saw several leading candidates try to stoke heightened public anxiety over terrorism. There were no acknowledgements that acts of terrorism are exceptionally rare, with just “45 Americans killed in jihadist terrorist attacks” since 9/11. (More Americans have died as a result of homegrown right-wing terrorism, but that threat didn’t earn a single mention at the debate, even though one such attack took place just days before San Bernardino.) This was more about resurrecting the national security politics of the Bush years, when Republicans would conjure the threat of imminent terrorist slaughter on American soil to cast Democrats as weak and to justify the rollback of civil liberties in the interest of safety. A scared voter is a motivated voter, and Republicans have every interest in keeping people as terrified as possible.