This "Star Wars" fan is worn out: The nonstop marketing machine has turned fandom into a grind

I'm looking forward to seeing "Star Wars: The Force Awakens"—and to the hype machine slowing down 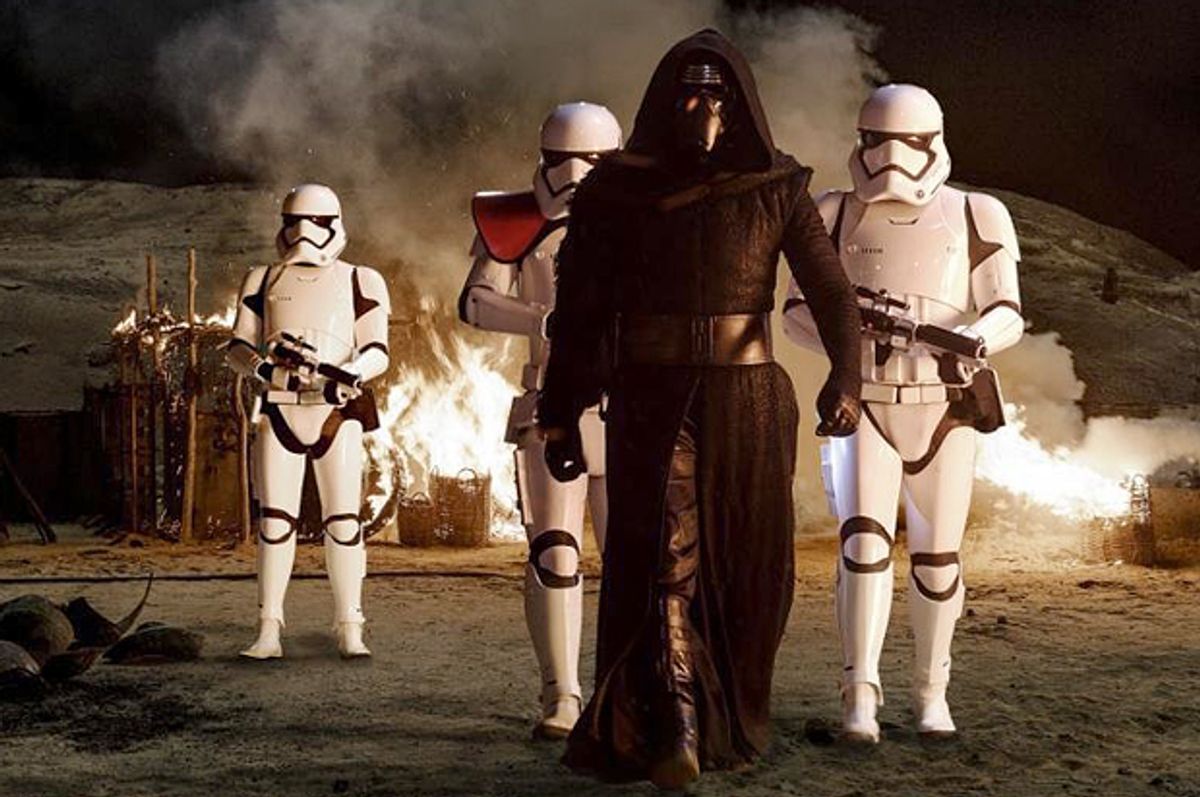 Unless you’ve been living under a rock in Beggar’s Canyon for the past three years, you know about “Star Wars: The Force Awakens,” which finally detonates across screens, and into the gray matter of millions of American minds, on Friday.

Because we’re told J.J. Abrams’ reboot is here to save the franchise nearly ruined by George Lucas, “The Force Awakens” arrives with the marketing maelstrom and trumpeting worthy of a second coming. But even Jesus would not have been greeted with this much fanfare. We’ve been bombarded a zillion times with trailers, advertisements, tie-in merchandise and marketing schemes every time we turn on the television, use social media, shop online, or go to the mall and supermarket.

The hype-train has hit hyperdrive. The entertainment-industrial complex has devoured us all like that sarlacc from “Return of the Jedi” lurking in the Great Pit of Carkoon.

Like any self-respecting fanboy, I’ve been pumped to see this new episode. But I haven’t wanted to participate in this unstoppable, multiplatform, transmedia experience. I don’t need to interact with the "Star Wars" brand, or feel part of some larger consumer narrative.

Dear Lucasfilm and shareholders of the Walt Disney Co.: I just want to watch your damned movie.

But that’s been hard to do. That’s because the movie itself is no longer the thing – it’s a delivery mechanism for this onslaught of other stuff. “The Force Awakens,” the part where I sit down in the theater, is the afterthought.

Wielding its tractor beam, Lucasfilm/Disney has masterfully directed the public’s attention and spending behavior, meting out morsels of content as if to starving prisoners stuck on some "Star Wars"-deprived penal planet.

I’ve been able to hold off playing a "Star Wars" Lego video game, or getting the "Star Wars" app. I’ve stopped myself from buying 12.4 ounce boxes of Cheez‑It Star Wars Baked Snack Crackers on sale for $2.88 at Wal-Mart, and that Battery-Operated Yoda with LED Light Saber Tree Topper last time I was at Home Depot.

Hopping on a Twitter chat with “Star Wars: The Force Awakens” cast members (#TwitterAwakens), sure, I was tempted. But I abstained. As for Carrie Fisher’s sassy promotional appearance on “Good Morning America,” accompanied by her French bulldog Gary? OK, I admit it. I tuned in.

And when it came to the spoiler-laden teaser trailers and TV spots, especially the nostalgia-inducing one featuring Han Solo’s heart-piercing line, “Chewie, we’re home” .... Um, I did everything in my power to avoid watching them. But in the end, I caved.

Cue Darth Vader: “It is useless to resist.”

I’ve succumbed to the dark side of these market forces. So, too, have dozens of other members of the “Star Wars” faithful I’ve spoken with. They’ve also entered into this enterprise of fandom with mixed feelings — excited, to be sure, but also lowballing their expectations, and aware they’re being taken for a ride. They, like me, haven’t wanted to fall prey to the hype, or feel like a pawn or stooge in all this ballyhoo. But my failure is complete.

I know what you’re thinking: The "Star Wars" franchise has always been commercialized. So stop your grumping and just get with the times. (Plus, no one is buying power converters at Tosche Station anymore, old man. All the kids on Tatooine shop online at AmazonGalaxy.)

Fair enough. As a 49-year-old fanboy, I know that pure moviegoing experience of 1977, back when I saw the first “Star Wars” movie as a rapt and transfixed 10-year-old, is no longer possible. So how to protect myself this time around from my beloved science fantasy saga? Must I be weighed down by these unstoppable commercial forces, the pressures of consumer participation, as well as the burden of memory, nostalgia and expectation?

When I truly search my feelings, what I’m most troubled by is that we’ve all become willing collaborators in the marketing blitz. We’re seduced to tweet, to follow, to share our own footprints across the Star Wars brand with the rest of the Internet, which only promotes the film further. So much for the word-of-mouth of kids whispering to other kids “You gotta see it!” on the school playground.

Perhaps it’s naive and foolish to think we can reclaim that uncomplicated cultural and commercial headspace. We’re so much more interconnected now. None of us feels as isolated and clueless as Luke Skywalkwer did, marooned on Tatooine with only a few vague rumors of a messier world out there. Or, in my case as a kid, with a few Saturday morning TV commercials about "Star Wars" action figures to make me feel part of something bigger than myself.

None of us is that naive, or alone, anymore.

In the end, it’s not the rampant merchandising or social media barrage that irks me the most. What saddens me is the loss of that sense of discovery and naiveté we once felt in the cinema -- one not pre-poisoned by sneak peeks, leaks and Internet-enabled 24/7 news coverage. I miss the mystery of not knowing.

Maybe in the end, when I finally do see “The Force Awakens,” all these dark thoughts will fade. I’ll be able to fully immerse myself in that world again, let the eye-popping grandeur of "Star Wars" wash over me, and that 10-year-old kid inside me will be blown away. I sincerely hope so.

At least I can finally see the movie. If nothing else, trapped in the theater, I’ll be shielded from "Star Wars" hype for a couple of hours.