Race, guns and gender -- the common denominator at the heart of so many problems -- are what we need to talk about 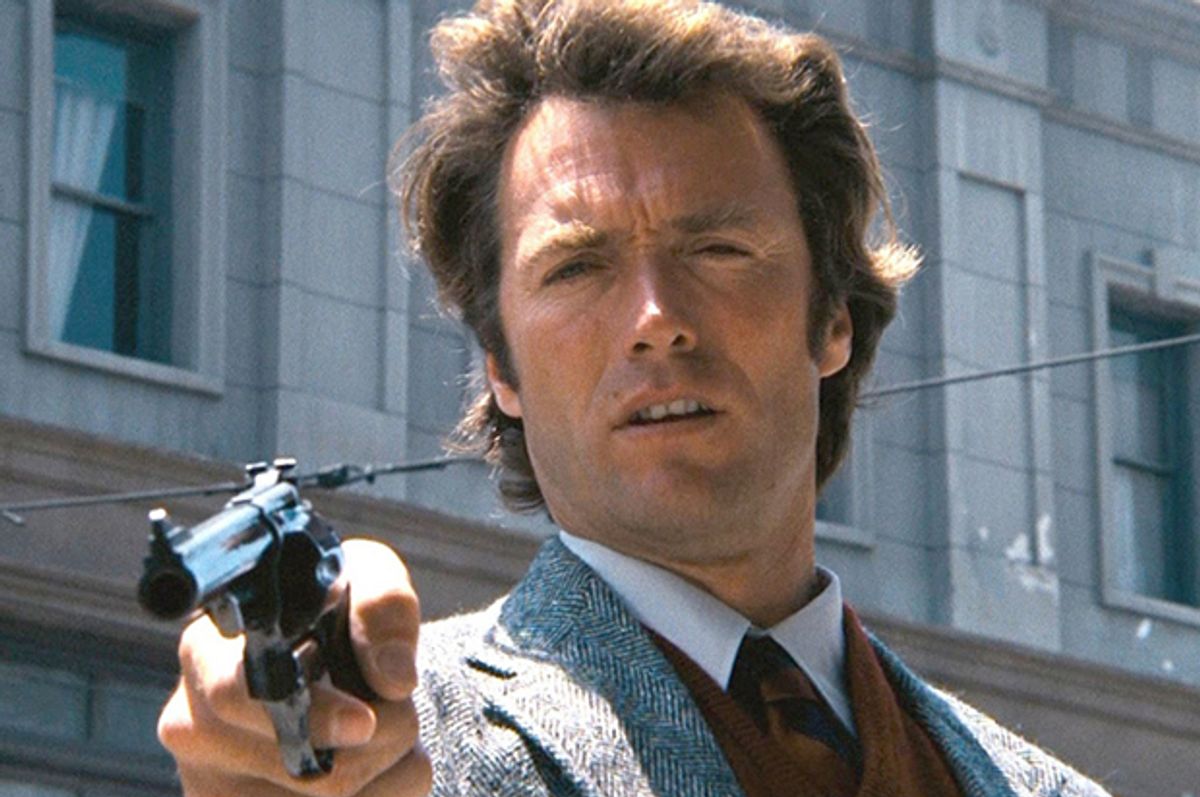 When the New York Times editorial board issued its powerful condemnation of America’s gun culture, they went beyond mere outrage in response to the recent murder sprees in San Bernardino, California, and Colorado Springs, Colorado. The Times went so far as to suggest that “assault rifle”-style weapons should be banned from civilian ownership. As is our national ritual, President Obama also condemned gun violence, and just as he has been forced to do too many times during his tenure, pleaded that Americans must find a way to stop killing each other. The American people do in fact support stronger gun control laws; the NRA, functioning as the lobbying arm for the gun industry, opposes even the most basic common sense gun laws. The NRA wins while the American people die.

This is political intractability in a democracy broken by the power of a very well-funded interest group to subvert the public’s will. But, there is another little-discussed factor that helps to explain America’s obsessive and near pathological gun culture, unwillingness to treat gun violence as a public health crisis, Right-wing domestic terrorism, and propensity for mass shootings. It transcends all of those issues. But this factor is usually treated as verboten, something to not be unspoken of, because of the rage, threats of violence, and animus it inspires.

The common denominator is white masculinity and the particular ways that it is connected to American gun culture and the color line.

The gun is central to the founding of an American society where hierarchies of race and gender were central to the country’s Herrenvolk white racial settler democratic project. America was born as, and remains, a culture and society dedicated to maintaining the dominance, privilege, and power of white men over people of color and women. This was not an accident, bug, or a glitch. It was a feature.

Guns helped White America to commit genocide against First Nations peoples and to steal land under the doctrine of Manifest Destiny. The gun maintained Southern society as a white over black racial military dictatorship. The gun was also a tool for white elites to control the working classes and poor.

The color line dominates America’s past and present. The United States’ racial order, those seemingly arbitrary, yet so very powerful and life altering demarcations of who is “white” and “non-white” in the United States, was born in 1675 during Bacon’s Rebellion. In that moment, white indentured servants and black “laborers” struggled together against the planter class in Virginia. The planter class found a solution, one that still dominates how Whiteness pays a psychological and material wage to white people in the United States. White elites decided to give white indentured men guns and land when their period of service was complete. In contrast, black people would be slaves, people without rights in that society, and whose period of “service” was permanent: the black body became human property and a vessel for White America’s wealth.

In that crucible of race-making, poor white people in America were elevated above their (former) black allies, friends, family members, lovers, and compatriots. They were also made central to maintaining America’s racial order by using the gun to kill indigenous peoples and to suppress slave rebellions. This class of (now empowered) poor white men would become the overseers and slave patrollers of the antebellum slave South, a group that would be the basis for the United States’ first modern police forces.

At the moment of genesis for race in America, when “white people” and “whiteness” were born, the gun was a marker of racial identity and power.

After the Civil War, white Southerners desperately tried to snuff out the freedom dreams and democratic power of now free African-Americans. Once Reconstruction was betrayed, white Southerners would launch a reign of terror where it is estimated that approximately 50,000 black Americans were killed by whites. White elites understood the practical and symbolic power of the gun. As such, they passed laws that made it illegal for black Americans to own firearms. African-American Civil War veterans, a group that had earned their full citizenship as men via martial prowess, would be made the focus of special violence by white Southerners.

The infamous Black Codes and Jim and Jane Crow denied guns to black people on practical grounds—black people with guns would be able to actively resist white supremacist violence and political disenfranchisement. These laws had symbolic power as well. Because gun ownership was reserved for white people, it was deeply integral to notions of white masculinity and white male power. The gun was a tool for white men to protect “the white family” against non-whites. The gun was also a way for white men (the normative and idealized “white heterosexual Christian male) to impose their power both within their families, as well as against other white men in the public and private sphere when necessary. In America, hegemonic white masculinity has many dimensions: the gun is central to its order.

African-Americans and other people of color have resisted white supremacy and fought for their democratic rights and liberties since before the founding of the United States. Black elites, as well as the rank and file members of the black public, understood the practical and symbolic power of guns in America. Black freedom fighter Ida B. Welles famously said that “the Winchester rifle deserved a place of honor in every Black home.” African-Americans used guns to fight back against white on black racial pogroms and efforts at ethnic cleansing across the United States during the “bloody summers” of the post World War I era. There were armed self-defense groups such as the legendary Deacons for Defense who served during the Civil Rights Movement. Robert Williams, author of the book Negroes with Guns, and founder of Radio Free Dixie, advocated black armed self-defense against white racial violence. In an iconic visual, members of The Black Panther Party, in compliance with state law, marched on the California state capital while brandishing their guns.

The notion that gun ownership should be exclusive to white people would be asserted once more. Ronald Reagan, then governor of California, worked to pass stricter gun laws because of the Black Panthers using open carry laws. Robert Williams would be forced into exile in Cuba. Black people who fought back against white racial terrorism were killed by white mobs, police, and other State actors.

While black Americans and other people of color tried to use guns for self-defense and to actively protect their full citizenship rights, firearms are also a tool for stifling democracy and freedom. While gun fetishists and conservatives obsess over their fantastically deranged belief that a firearm is a Constitutional “right,” one that in an age of drones and robotic killing would help them fight “tyranny” in America, leading scholar Richard Slotkin has insightfully observed that guns are also the ultimate suppressor of dissent and democratic discourse.

There are many examples of this at present. Armed white people, mostly men, have been brandishing weapons to intimidate Muslims in Texas. White, mostly male, open carry advocates, march in public with guns, intimidating the general public and those who disagree with them. After mass shooting incidents, Republican politicians suggest that gun violence is somehow the price for the “freedom” and “liberty” of gun ownership in America. For them, a country awash with guns and gun violence is inseparable from American Exceptionalism. This is a macabre and sick understanding of what makes America “great.” That gun violence apologists on the American Right-wing cannot think of some greater motivation for their worship of “American Exceptionalism” is a devastating indictment of the country’s civic health. Moreover, those who advocate better enforcement of gun laws, and treating gun ownership and violence as threats to public health and safety, are often treated by conservatives as though they are “anti-American” threats to “freedom.” And given the eliminationist rhetoric and authoritarian tendencies of contemporary conservatism, gun control advocates are often harassed and threatened with violence.

Race, guns, gender, and politics have a knotted relationship in the United States. But research by social scientists and others can help us to gain some insight into this puzzle.

White men are approximately 30 percent of the population but account for 60 percent of the mass shootings. Domestic terrorism by white Right-wing Christians, again, mostly men, has been identified by the F.B.I. as the United States’ greatest internal threat.

Research by Kerry O’Brien, Walter Forrest, Dermot Lynott, and Michael Daly as featured in the journal PLS One, has shown that white symbolic racism is directly related to gun ownership, hostility to gun control laws, and support for concealed carry.

Stand Your Ground laws are racist in their enforcement and use. Support for concealed carried laws is also related to anti-black sentiment and animus.

White men are 31 percent of the population but own 62 percent of the guns in the United States. While the inability of the United States to pass and enforce meaningful gun control laws is a result of the power of monied interests such as the National Rifle Association and gun industry, it is also a function of how gun ownership has historically been connected to white masculinity.

In a social and political moment where white (working class) men are less hopeful about their futures, sense (however incorrectly) their diminishing power as a group, the country is experiencing the rise of authoritarianism and proto fascism as embodied by Donald Trump and the Republican Party, fear of “terrorism” and narratives about “white people” becoming a “minority” are en vogue, the gun is a type of security blanket and defense against a sense of existential angst and white male obsolescence.

There will be no effective gun control in the United States, even in the aftermath of horrific events such as Sandy Hook, the Planned Parenthood Shooting, or the San Bernardino massacre, until politicians, pundits, and analysts realize that the gun is a type of totem or fetish object for too many white men. As such, when we try to talk about gun control in America, a centuries-deep sense of white masculinity that understands the gun as its exclusive right is made to feel imperiled and upset.

The complex relationship between guns, race, and gender are central to America’s national character. One cannot truly understand America’s past and present without taking a full account of those variables. As a recent article in the American Journal of Public Health notes:

However, in the present day, the actions of lone White male shooters lead to calls to expand gun rights, focus on individual brains, or limit gun rights just for the severely mentally ill. Indeed it would seem political suicide for a legislator or doctor to hint at restricting the gun rights for White Americans, private citizens, or men, even though these groups are frequently linked to high-profile mass shootings. Meanwhile, members of political groups such as the Tea Party who advocate broadening gun rights to guard against government tyranny—indeed the same claims made by Black Panther leaders in the 1960s—take seats in the US Congress rather than being subjected to psychiatric surveillance.

It would appear that in the United States too many white men love guns more than their children, wives, each other, and--as indicated by suicide rates--even themselves.