A shame on America: Hate attacks on U.S. Muslims are spiking — and where's the outrage? 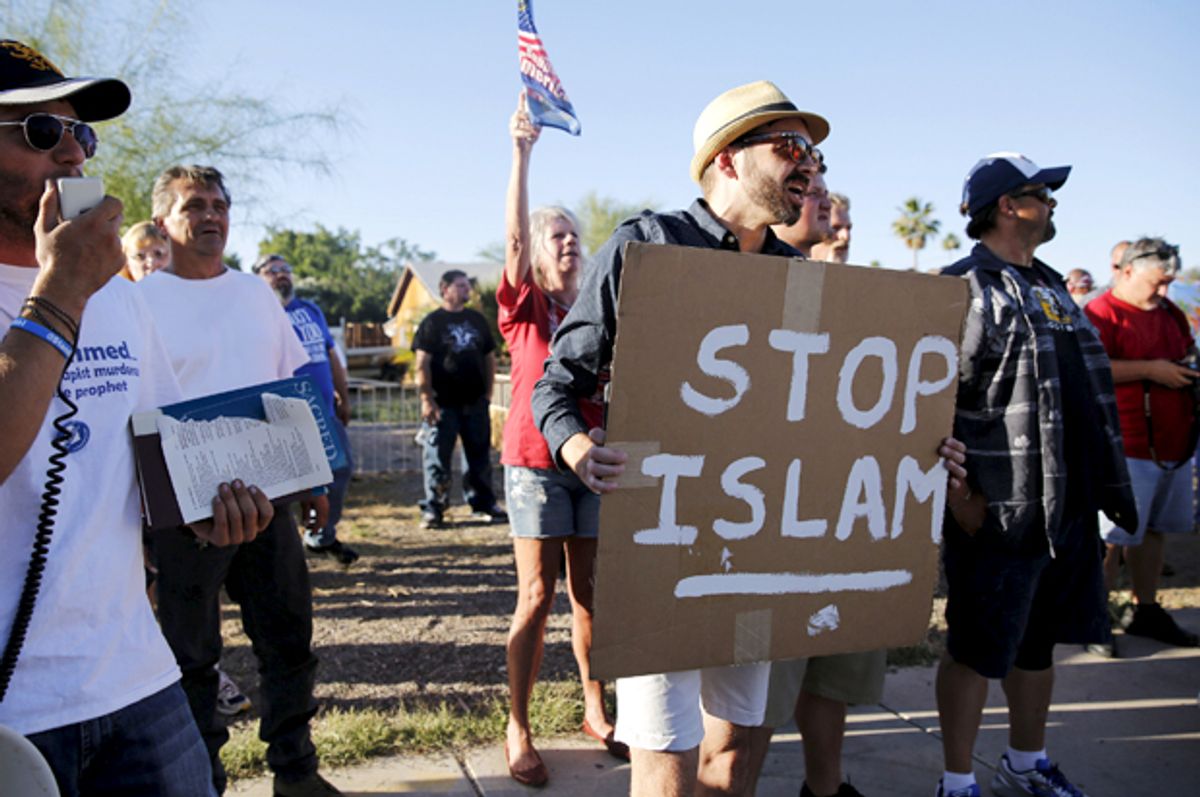 There has been a relentless string of attacks on American Muslims in the past month -- incidents that have been nothing short of extreme, and enormous in number. In just a few weeks, there have been dozens of attacks throughout the U.S., often several per day.

This is just a small sample of the attacks. The list goes on and on.

A study conducted by CAIR and reported by CNN found that, from the beginning of 2015 up to Dec. 8, American mosques and Islamic centers were the scene of at least 63 acts of vandalism, harassment, and anti-Muslim bigotry. A CAIR spokesman noted, however, that this figure is likely drastically underestimated.

Since the Nov. 13 Paris attacks — for which ISIS claimed credit — and the Dec. 2 San Bernardino shooting -- which was blamed on Islamic extremism, about which the FBI investigation has raised doubts -- the incidence of anti-Muslim attacks has rapidly spiked, to off-the-chart levels.

An estimated one percent of Americans are Muslim. The exact number is difficult to pinpoint, because the census does not ask about religious affiliation. There only only a few million Muslims in the U.S., but the chances of the victim of a hate crime being Muslim are enormously disproportionate.

Meanwhile, it would be hard to imagine less outrage over so many attacks on any other minority group.

At what other place of worship would this be tolerated? If people with assault rifles stood outside of a Christian church or Jewish synagogue, Americans would explode in fury. Those with the assault rifles might be arrested for threatening worshipers; they might even be shot. When it is Muslims that are threatened, dare I say terrorized, by heavily armed Islamophobes, on the other hand, suddenly the problem is framed as a First Amendment issue.

A Muslim judge in Brooklyn judge was sworn in on the Koran, and she received numerous threats. Anonymous callers said "You are not an American" and "You are a terrorist," warning "We know where to find you" and "Watch out because we are going to get you." This is a judge they are threatening.

Last weekend, two mosques were vandalized in southern California. The vandals spray-painted "Jesus" on the front of one and left a plastic hand grenade in the driveway. The fact that the hand grenade was fake shows that, even if they are not directly using violence, the goal of these bigots is to instill terror within American Muslims, to make them afraid to leave their homes and be part of the community.

Many Muslim friends and colleagues have told me they are frightened each and every day they go outside. They say the atmosphere of violent hatred is even worse than what they experienced immediately after 9/11.

These constant attacks should have generated national outrage, but Americans have largely been quiet about the ever-growing violence against their Muslim compatriots.

What ever happened to "Never again"?

Relatively moderate Republican presidential candidate John Kasich ran a television ad in which he attacked fellow candidate Donald Trump for his overtly anti-Muslim, anti-immigrant and xenophobic positions. Kasich alluded to a well-known poem by Martin Niemöller, a German Lutheran pastor who was imprisoned in concentration camps for his outspoken anti-Nazi dissidence.

"You might not care if Donald Trump says Muslims should register with their government, because you're not one.

And you might not care if Donald Trump says he's going to round up all the Hispanic immigrants, because you're not one.

And you might not care if Donald Trump says it's okay to rough up black protesters, because you're not one.

And you might not care if Donald Trump wants to suppress journalists, because you're not one.

But think about this: If he keeps going, and he actually becomes president, he might just get around to you. And you better hope there's someone left to help you."

"Never again" has become a bit of a cliché at this point, but for good reason. When we say "Never again" we truly mean never again -- at least we are supposed. It appears many people have forgotten what exactly the phrase means; they have forgotten the lessons of history.

People look back at the rise of fascism in the early 20th century and ask how such systemic inhumanity could have possibly arisen. These same people are saying nothing today, when we see the very same signs.

The parallels today to the rise of fascism almost a century ago are striking. Extreme-right groups are on the rise throughout Europe. In France, the Netherlands, and more, far-right groups are among the most popular parties in the country.

Every European country has its equivalent: France has the National Front; the Netherlands has the Party for Freedom; Greece has Golden Dawn; Hungary has Jobbik; Denmark has the Danish People’s Party; Britain has the British National Party and the U.K. Independence Party; Germany has the National Democratic Party and Pegida.

Some of these far-right groups — like the neo-Nazi Golden Dawn party — openly adopt the fascist symbols of the past. Most are a bit different, and try to distance themselves from classical fascism. Despite their political differences, nevertheless, what unites them all is that they are explicitly anti-Islam.

In the U.S., the Republican Party exhibits many of these same characteristics. And the specter of Donald Trump, in particular, has only increased the parallels.

Whether or not Trump believes the vitriolic hate he spews is ultimately irrelevant. It is having an impact. Almost every time Trump makes racist comments and proposes anti-Muslim policies, his popularity rises.

Sitting around and asking whether Trump is really a fascist is a wrongheaded approach. Regardless of what Trump's actual politics are, one thing is certain: Fascists really, really like Trump.

White supremacists love the Donald, and are telling everyone to vote for him. Trump is giving them a mainstream platform they've never had before. He is directing so much traffic to neo-Nazi hate sites that their servers are crashing, and they are having to upgrade.