CNN has a dangerous case of Donald Trump denial: How they're pretending this is business as usual—and letting the country go off the rails

The media is clinging to outdated narratives about our political process, and missing the revolution under its nose 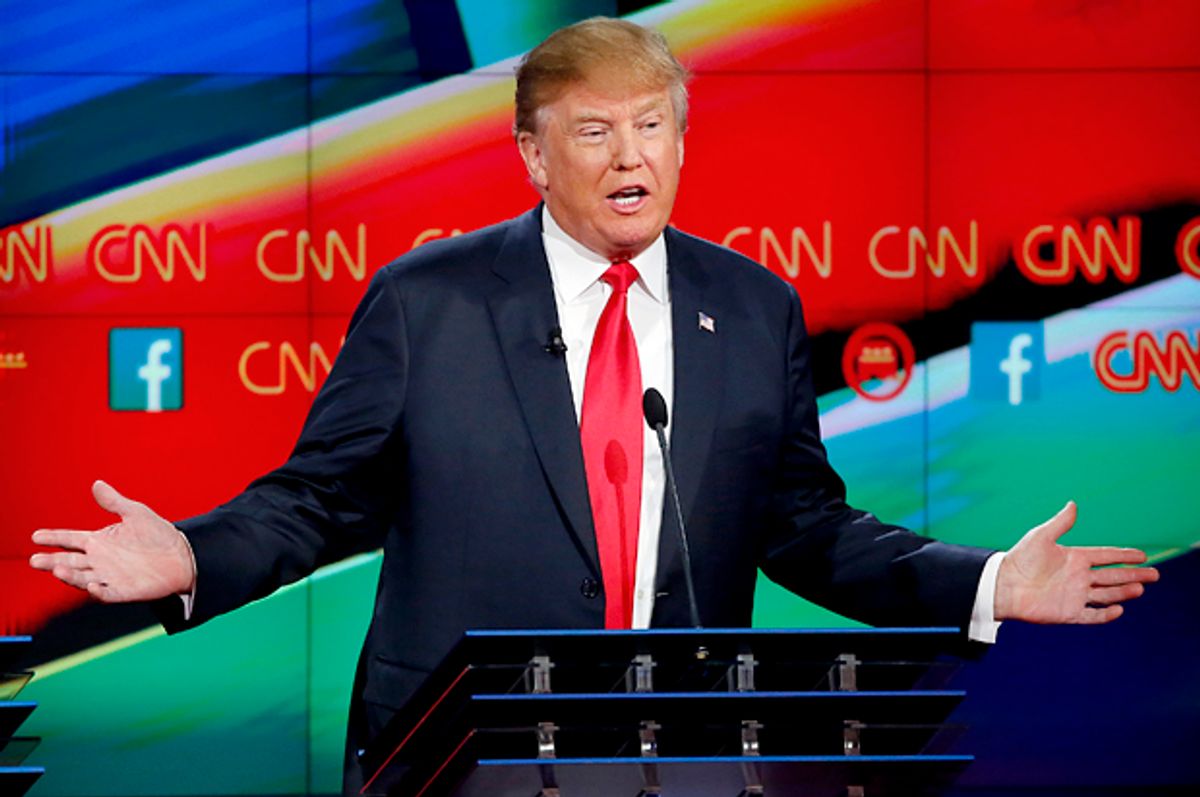 This is probably an exercise in futility, but here goes anyway. Perhaps the only thing worse than the atrocious GOP debate Tuesday night was the atrocious coverage on CNN and the other cable news networks following the debate. There's a terrible cancer inside American politics, deadlier than ever, and the television news media isn't doing nearly enough to diagnose it for the benefit of American voters.

The tumor currently devouring a full half of the presidential discourse is, of course, Donald Trump. But it's not strictly confined to him. The Trump carcinoma has metastasized in the form of an entire slate of GOP candidates who, each in their own way, are making a serious effort to match Trump on pandering to the intellectually violent base. Trump's rivals might not be matching him in the polls, but they're damn close when it comes to being completely unserious. It's this lack of seriousness as well as a pervasive inability of the Republican candidates to comport themselves with dignity or discipline, which the traditional press and especially cable news have been utterly failing to emphasize in their coverage of the 2015-16 election cycle so far.

It's not just me, by the way. Some of my Republican counterparts agreed that among the current surviving roster of GOP candidates, there are, at most, three or four "presidential" candidates in the litter, and exactly none of them have a real shot at winning the nomination. Specifically, it's conceivable that Lindsey Graham, Jeb Bush, John Kasich and perhaps Marco Rubio would make competent if not necessarily successful presidents. (It goes without saying that I disagree with them on most issues, though Graham has been talking very reasonably about the climate crisis and Islamic relations.) Sadly, and revealingly, they've all taken a backseat to the crazies.

In the context of that reality, it's extremely unsettling to note that, rather than highlight the mendacity of the GOP's top-shelf candidates, cable news coverage of this week's CNN debate focused instead on the predictably superficial aspects of the event. You know the list: What did Trump say? Who won the debate? Who earned a debate bump in the polls? Who has momentum? Who will we talk about over Christmas dinner? The horserace, basically.

Incoherent and unserious remarks delivered with confidence and aplomb are still incoherent and unserious remarks. That said, I get it. The performance aspects of a debate are part of our quadrennial evaluative standards for presidential debates. There's generally nothing wrong with discussing how well or poorly a candidate comported him- or herself in the face of scrutiny. After all, we expect our future presidents to be strong on television and, in a perfect world, the debates serve to highlight which candidate can deal with an audience of millions. But these are special times and harrowing circumstances given the clownish status of the GOP and, in particular, its would-be nominee Trump. Frankly, I've been covering politics in one form or another for 30 years -- part of that time was spent as a young Republican activist, by the way -- and I've never seen a field of Republican candidates quite this cartoonish.

It was a debate in which one candidate, Dr. Ben Carson, said he wouldn't mind killing family-members of suspected terrorists; another candidate, Chris Christie, said he'd happily precipitate World War III against Russia if it violated a hypothetical no-fly zone over Syria; another candidate, Ted Cruz, said we should engage in precision strikes against ISIS while, incongruously, calling for the indiscriminate carpet bombing of the Middle East; and, of course, there was Trump with his simpleton-conceived "big beautiful safe zones" and his ignorance about how the internet works. Not a single candidate, save for perhaps Rand Paul who suffers from his own unforced errors, had anything to say about foreign policy and national security that showed the restraint or thoughtfulness to successfully navigate the international stage. Couple all of this with recent history in which the Cruz campaign released a video of the Texas senator cooking bacon in the barrel of a machine gun; Rand Paul released a video in which he literally shot the tax code; and Fiorina premiered a video this week in which she ate dog biscuits. These are your Republican candidates for President of the United States. And they're unacceptable.

Yet CNN's post-debate analysis was focused on the usual nonsense. Did Cruz "do what he needed to do?" Who cares! He flailed around on stage so badly, he not only ignored the debate rules, shouting over the moderators, but he might've also accidentally divulged classified national security secrets in the process. Same goes for Fiorina.

The takeaway from the coverage? The behavior of the GOP frontrunners is acceptable as long as they didn't choke on their own tongues. (Carson's coughing fits aside.)

American politics are one part constitutional and one part tradition -- and the tradition really matters. It might be exciting to see Trump exercise his superpower-strength trolling on live television, and in the face of a Bush for that matter, but the press has a duty to tell voters that this isn't how it should be. We expect talk radio screechers or Fox News personalities to act like 'roid-raging professional wrestlers. We also expect a certain degree of actual debating in our debates. Yet if this kind of Trump-inspired knuckleheaded poop-flinging is allowed to continue by our news media gatekeepers, it, too, will become something we expect.

That's the nightmare. The press is tempting an eventual field of political Trumps not just in 2016, but also in 2020 and beyond, simply by refusing to step up and deliver a Cronkite-style reality-check in which the truth is finally spelled out for the public: The GOP candidates are totally off the rails and the behavior that's derailing the clown car must not be allowed to coagulate into tradition. Screw the "liberal media" myth. This is more important than bumper-sticker labels and disproved myths about bias. The GOP is drawing us closer to political self-satire and the news media has a responsibility to kill it before it multiplies.

The grabassery of Trump, Cruz, Fiorina and Carson makes other participants like Bush and Kasich seem statesmanlike in comparison. I'm probably not alone when I confess to being relieved when Bush or Kasich or even Rubio spoke up. While their ideas are untenable and occasionally disgusting, at least they didn't besmirch the process by ignoring basic decorum or by insulting our intelligence. At least a few of the participants carried themselves with an eye on appearing presidential. It matters a lot, especially when the top polling candidates wouldn't know "presidential" if it walked up and smacked Trump's wig off his head.