Not all the "Star Wars” prequels suck: Revisiting “Revenge of the Sith,” the most tragically underrated episode

As "Star Wars" movies go, Episode III is probably only the third or fourth best—but as a telenovela, it's genius 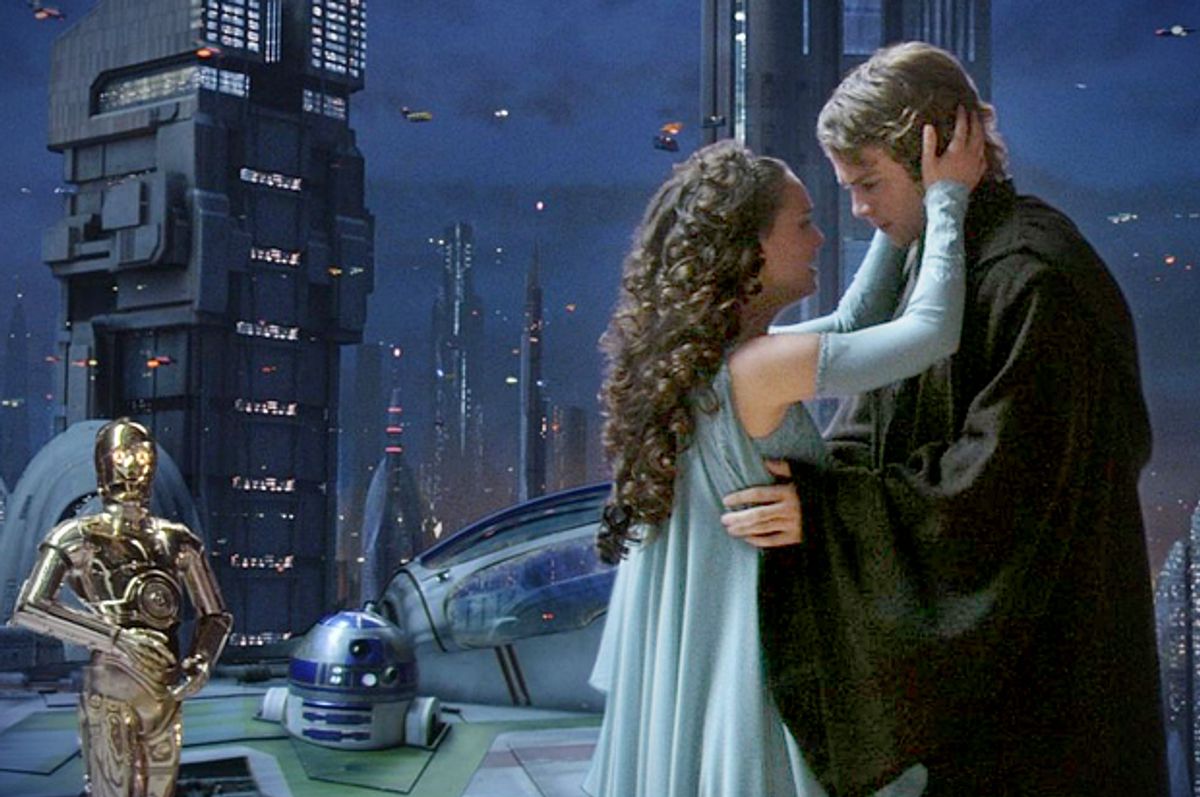 A decade ago, “Revenge of the Sith” ended George Lucas’ prequel trilogy with a presumptive whimper. To say that the previous pair of films in the rebooted franchise were poorly received by fans is an understatement. In a 2003 episode of “The Simpsons,” Homer’s co-workers, Carl and Lenny, engage in a lightsaber battle at the nuclear power plant while they argue over which of the widely despised prequels was worse. Lenny shouts, “’The Phantom Menace’ sucked more!" while Carl maintains, "‘Attack of the Clones’ sucked more!’"

No matter your opinion on that age-old debate, the prequels have become synonymous with disappointment and heartache, a feeling of witnessing something you worshipped as a child get mired in midichlorian nonsense and embarrassingly racist pantomime. But while “The Phantom Menace” and “Attack of the Clones” deserve their poor reputations, “Revenge of the Sith” remains incredibly underrated, unfortunately tarnished by the appalling misfires that came before it. In his review of the most recent entry in the ongoing series, “The Force Awakens,” Los Angeles Times critic Kenneth Turan referred to the film—like its predecessors—as “abortive.”

Comparing “Revenge of the Sith” to a terminated pregnancy is a bold claim, but it’s sadly reflective of the damage time has done to Episode III. Believe it or not, the film received mostly positive reviews after it debuted in theaters in May 2005. Influential critic Roger Ebert wrote in the Chicago Sun-Times that the film was a return to form for the franchise: “If [George Lucas] got bogged down in solemnity and theory in ‘Episode II: Attack of the Clones,’ the Force is in a jollier mood this time, and ‘Revenge of the Sith’ is a great entertainment.” The New York Times’ A.O. Scott had even more superlative praise, calling it the “best of the four episodes Mr. Lucas has directed.” (Yes, that means he thought it was even better than “A New Hope.”)

Both critics acknowledge that the film is not without its flaws—including George Lucas’ famous tin-eared dialogue. While Scott and Ebert felt the film succeeds in spite of the screenplay, I think that’s part of what makes it work. If Roger Ebert compared the original trilogy to a space opera, “Revenge of the Sith” is akin to a delicious space telenovela, and the script makes a lot more sense if you imagine the words being dubbed for the actors as they speak. “Revenge of the Sith” might only be the third- or fourth-best “Star Wars” film (depending on your feelings about ewoks), but it would be the greatest Telemundo show ever made.

Take the famous “you’re breaking my heart!” confrontation between Padmé (Natalie Portman) and Anakin Skywalker (Hayden Christensen): After learning that Anakin was responsible for murdering a bunch of kids (e.g., “younglings”), Padmé corners him and begs him to remember the man she fell in love with. “Come away with me,” she pleads. “Help me raise our child. Leave everything else behind while we still can.” The scene is meant to be an indication that Anakin is completely corrupted and unsalvageable; the dark side has won. But in the theater I saw it in, the audience couldn’t stop laughing.

But if you imagine the scene with a wind machine in the background, it begins to make sense, and the screenplay revels in these tensions—a jarring distance from the action, just as we should be pulled in by Anakin’s journey into the darkness. “Revenge of the Sith” is nothing but intergalactic epic theater, a term coined by Bertolt Brecht to describe drama that doesn’t ask the audience to identify with the characters; instead Brecht purposely removed audiences from the action with devices designed to take you out of the scene. In cinema, melodrama maestro Douglas Sirk was known for his use of fake-looking sets that would make the artificiality of his mise-en-scene explicit.

There’s the same Sirkian overwrought emotions mixed with too-elaborate backdrops in George Lucas’ work; while the CGI volcanic eruptions employed state-of-the-art technology to look as realistic as possible, there’s an “uncanny valley” effect that only indicates its own labored absurdity. Although Lucas pledged to bring Akira Kurosawa’s blood-soaked Shakespearean drama to American audiences, what he did was remake “Written on the Wind” for the 21st century—except with much, much worse acting. (If you want distance, Hayden Christensen’s performance delivers it in spades.)

The presence of playwright Tom Stoppard, who gave the script a polish, shows that may have been no accident. Stoppard’s own theatrical work, especially in “Rosencrantz and Guildenstern Are Dead,” often feeds off those same Brechtian devices. Stoppard wrote the screenplay to Joe Wright’s divisive 2012 adaptation of “Anna Karenina,” which sets the action of Leo Tolstoy’s novel in a theater. In “Anna Karenina,” Brecht’s Verfremdungseffekt (translating to “estrangement effect”) indicates “from the outset that what we are seeing is a fiction, something made up for our entertainment,” as film blogger Alex Michon astutely observes.

Thus, these devices wouldn’t work if the action weren’t genuinely thrilling at the same time that the film repels us. While featuring a series-defining dual lightsaber battle (Anakin vs. Obi-Wan and Yoda vs. Darth Sidious), what makes “Revenge of the Sith” quietly great is the same thing that every Bond film lives and dies on: its antagonist. In addition to the widely criticized aspects of “The Phantom Menace” and “Attack of the Clones,” those films also lack strong villains; poor Christopher Lee, tasked with the impossible mission of playing someone named “Count Dooku,” wades around Episode II awaiting for a purpose that never comes. He may as well be auditioning for Samuel Beckett.

“Revenge of the Sith” is supposed to be about Darth Vader’s origin story, and while the closing scenes—in which Anakin finally dons that iconic black helmet—have an indelible appeal for fans, any Episode III apologist knows that the film belongs to Ian McDiarmid. The Scottish actor radiates oily charm as Senator Palpatine, the snake that compels Anakin to bite the apple and realize his fall from innocence. A pivotal scene in which Palpatine argues the upside of darkness is amazingly compelling, especially given the fact that his acting partner’s definition of “morally conflicted” is to look like a petulant teenager.

Given his weaknesses as a writer, George Lucas does a surprisingly good job of navigating his universe’s ethical dilemmas, giving us a film that strongly resonates with our political times. In his 2005 review, A.O. Scott felt “Revenge of the Sith” offered striking parallels to the Bush administration, particularly in a scene where Anakin admonishes Obi-Wan for not following him to the dark side: “If you're not with me, you're my enemy.” And a scene in which the Senate votes to elect Palpatine its dictator is all but an overt attack on the unilateral powers given to President Bush following the passage of the Patriot Act, then voted in by an overwhelming majority. “So this is how liberty dies, with thunderous applause,” Padme mourns.

Padme’s lamentation might be so on the nose that it appears Lucas wrote the line with his nostrils, but it’s a pretty astute critique of the tyranny of the masses. That comment continues to ring true in a current climate characterized by Islamophobia and anti-immigrant hysteria, when the Republican front-runner can dominate the race while pledging to keep Muslim tourists out of the United States. George Lucas doesn’t understand the human heart, but when it comes to the darkness of the soul, he’s Joseph Conrad with a crystal ball.

Ten years later, “Revenge of the Sith” might not be a masterpiece, but it’s nothing if not strangely prophetic.