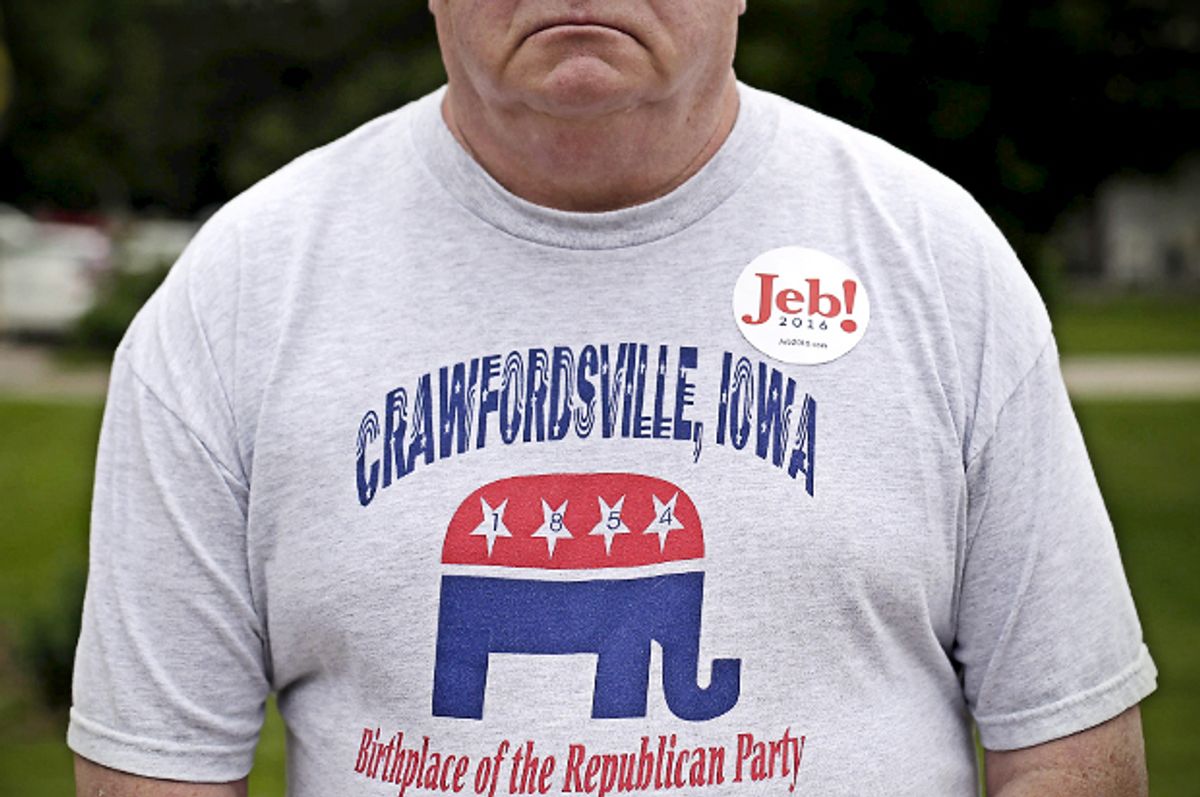 No matter who wins the nomination battle, the Republican Party has a much bigger problem: demographics. A new report released by the Center for American Progress analyzed the demographic advantages for Democrats in 2016 and beyond and the results are overwhelmingly positive.

And this should surprise no one.

Observers on both sides have long questioned the Republican Party’s viability in an increasingly progressive and less white America. With every national election, it becomes more obvious that the GOP’s “Southern Strategy,” which exploited racial and cultural resentment for votes, has finally backfired.

As The Nation’s William Greider wrote in October: “The GOP finds itself trapped in a marriage that has not only gone bad but is coming apart in full public view. After five decades of shrewd strategy, the Republican coalition Richard Nixon put together in 1968 – welcoming the segregationist white South into the Party of Lincoln – is no devouring itself in ugly, spiteful recriminations.”

Greider was responding to the resignation of House Speaker John Boehner, who left on account of the nihilistic Tea Party caucus. The Tea Party extremists in Congress, like the social conservatives who supported them, are part of a reactionary movement of cultural discontents whose only purpose is to negate and obstruct, and they've proven that in office.

This movement, which has consumed the Republican Party, consists primarily of old and disillusioned white people who are rejecting a world that, in many respects, has passed them by. The nativism, the xenophobia, the social hysteria, the religious demagoguery – this is what defines the GOP now, and it stems from the party’s cynical plot to capitalize on cultural angst nearly fifty years ago.

Although it worked in the short and medium-term, the “Southern Strategy” is now the most likely cause of death for the Republican Party. Republicans still hold 31 of 50 state governorships and they control most state legislatures, but that’s not the problem. Today and moving forward, the GOP will find it harder and harder to compete for national elections.

By appealing to the fears of culturally isolated white people, the Republican Party has created an intractable demand-side problem: Gradually, their platform has become dominated by social and religious issues which alienate nearly everyone outside of their base. Given the shifting demographics in this country, this portends doom for the GOP.

From the Center for American Progress report:

“Recent social trends present significant headwinds for Republicans, particularly as they relate to demographic shifts in the country. For years, Republicans could rely on white voters—and, in particular, working-class whites—to constitute a decisive proportion of the electorate and deliver victory. This is no longer the case. As documented in the 2014 “States of Change” report—published jointly by the Center for American Progress, the American Enterprise Institute, and the Brookings Institution—the percentage of white voters in the actual electorate dropped 15 percentage points, from 89 percent in 1976 to 74 percent in 2012. The percentage of white working-class voters dropped even more, decreasing by 26 points over the same period. Future projections in the “States of Change” report suggest that the percentage of eligible white voters in the American electorate will drop to 46 percent by 2060…The decline in the white percentage of the electorate has coincided with stronger Democratic identification and voting patterns among nonwhite voters, as well as increasingly more liberal social views among higher-educated white professionals.”

The writing is on the wall, in other words. In its current form, the GOP can’t survive, not if these projections are even remotely accurate. It will become a regional party, propped up by parochialism and gerrymandered districts. None of this means the Republicans can’t win in 2016. What it does mean, however, is that they’ll have to overcome a significant demographics disadvantage, a disadvantage that will only grow over time.

For the Democrats, the landscape is far more encouraging. Virtually all of the numbers favor a Democratic candidate in 2016:

The popular vote won’t decide the election, but it’s an indication of where the country is politically. The Democrats have won the popular vote in five of the last six presidential campaigns – that trend will continue and, eventually, it will translate into more and more electoral votes.

In 2016, all the Democrats need to do is hold on to the Obama coalition, and even that’s not entirely necessary. As the CAP report notes, the "sobering reality for Republicans is that the Democratic candidate will be able to absorb mild levels of defections or lower levels of turnout from its core voters in the general election and still capture an Electoral College majority." Because of its over-reliance on white male voters, however, the GOP can’t win a national election unless turnout is historically low for the Democrats. And they still have to appeal to a cross-section non-ideological working-class voters. But the anger and the bitterness pulsating through their base at the moment will surely turn moderates and independents off, and the GOP can’t afford that.

Whatever happens next year, it's clear that the GOP is slowly pandering its way into oblivion. The country has changed demographically, culturally, and politically - and the Democrats have changed with it. The Republican Party has not. And if Donald Trump's present success is any indication, it's headed in the wrong direction.