"You could see Jeb's balls growing as he was speaking": Trevor Noah finds some love for Bush

"Trump's plan for ISIS is to keep them off the Internet? What are you going to do? Change the wifi password?" 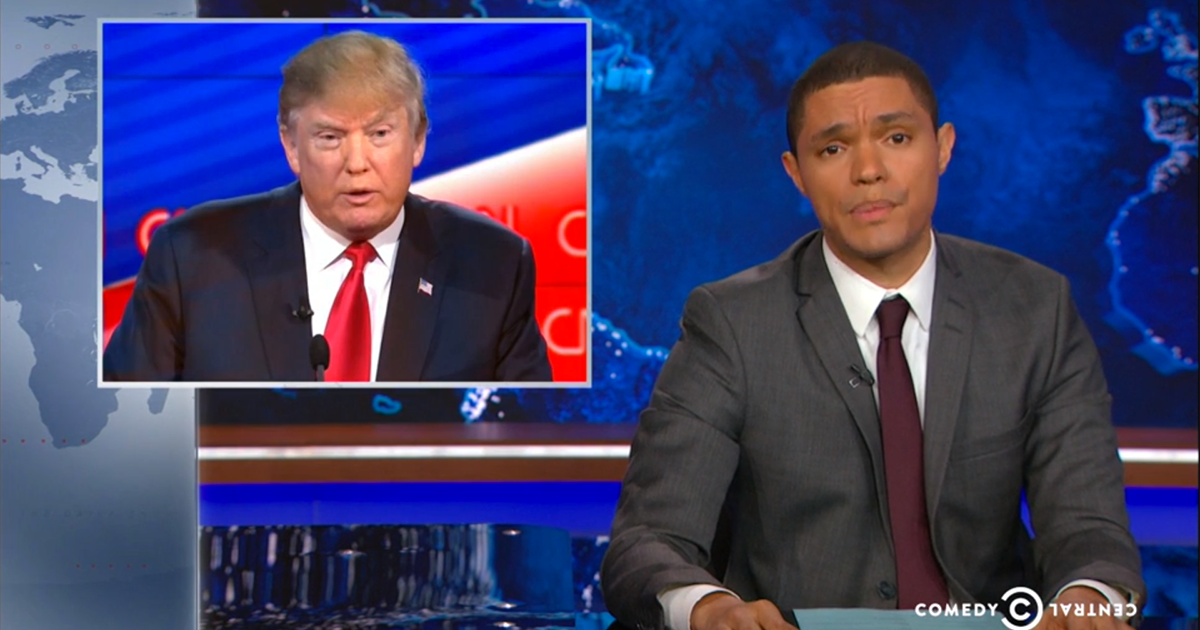 Trevor Noah began his debate recap on "The Daily Show" Wednesday night by saying there are so many candidates it's like a high school reunion every time they come out on stage. It's almost like you forget people are still running.

While most candidates began the debate with an opening statement Ben Carson went another route with a moment of silence Noah said was just a disguise for nap time. "And now, let's have another moment of silence until tomorrow morning," Noah said in his Carson voice.

But if there's one thing last night proved it is that "we're going to war, people," Noah said But the target was a little confusing. Carly Fiorina wanted to go after China, Donald Trump wanted ISIS and Governor John Kasich wanted to punch Russia in the nose. "I'm sorry these people are hilarious... Donald Trump's plan for ISIS is to keep them off the internet? What are you going to do change the wifi password?"

But it gets worse: Ted Cruz's strategy is "we win, they lose." Uhhh... ok? "I'm in," Noah said. "Just one question: How?" Noah then played a clip of Cruz saying he would target the bad guys. "Of course! You'd target the bad guys! Come on, Obama!" Noah said tapping his head. "Now that you say it, it seems so obvious! But again, just one question: How?" Cruz says carpet bombing, but of course didn't really understand what that meant. "I see, you avoid the civilians, with targeted carpet-bombing. Genius. Just one question, are carpets different in America? Because where I'm from carpets cover everything."

Noah even cheered on "guy who can't believe he's not the front runner" Jeb Bush who finally went after Donald Trump in a way that clearly got under Trump's skin. "You could see Jeb's balls growing as he was speaking. It's a Christmas miracle!" But, Noah said that this just made them bigger for Trump to kick, playing a clip of Trump doing exactly that. "This guy is a legend. He cancels your insult by saying you didn't mean it, then he insults you back."

One person was missing, however, Ben Carson. Perhaps because he was still taking a moment of silence. But Carson noticed it too, pulling a Jim Web and telling CNN's Wolf Blitzer to give him more speaking opportunities. "To be fair, Ben Carson, you're so boring that anything is a welcome distraction from... oh look! A tiny particle of dust floating through the air," Noah joked.

But the finally came when Noah went after John Kasich's mittens-hands who were so plastic-solid Noah said it was like he was doing some kind of badass kung fu moves at his podium. He played a Candy Crush looking game of having Kasich slicing fruit while he was responding.

Check out Noah's video below - but also look at the hilarious Desi Lydic segment fact-checking the candidates. Particularly the gem from Governor Chris Christie who said he would stand before King Hussein of Jordan and tell him that he has a new friend in the White House. Unfortunately, King Hussein has been dead for 16 years.