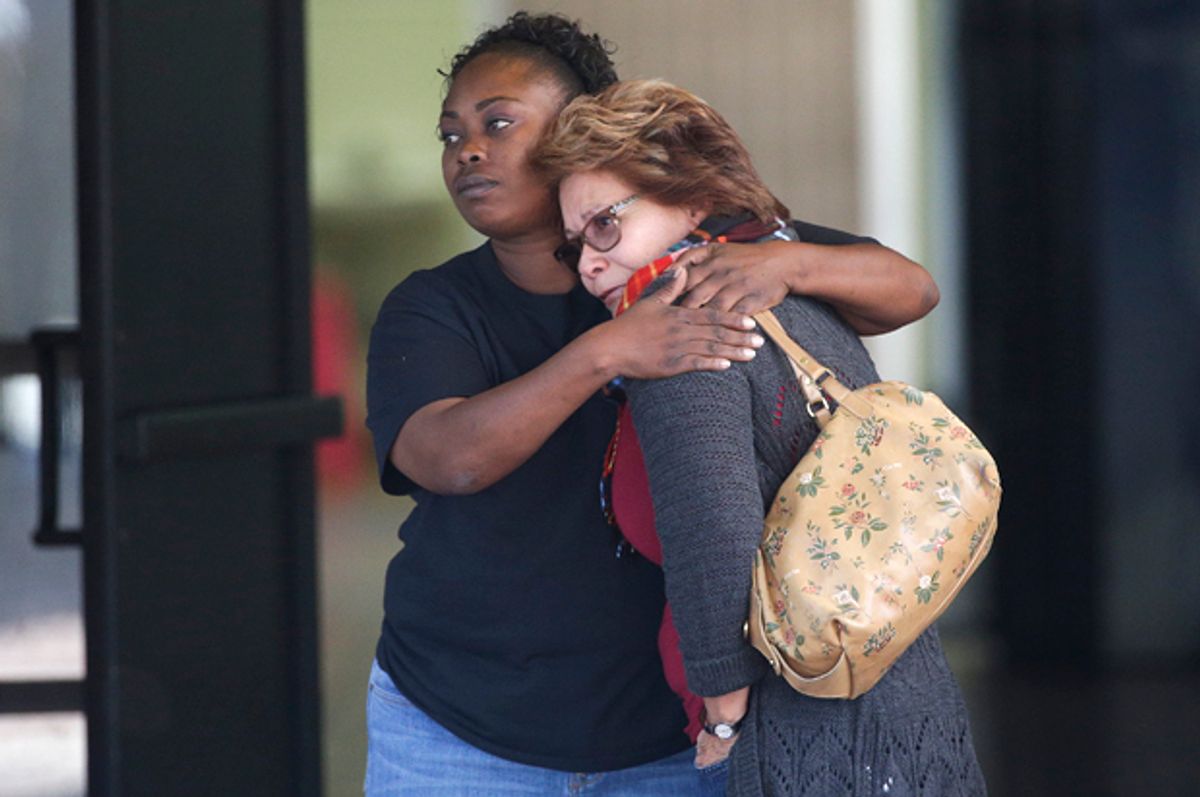 Wednesday, December 2, 2015, Syed Rizwan Farook, 28, and Tashfeen Malik, 29, murdered 14 people and injured 21 during a targeted attack at Inland Regional Center in San Bernardino, CA. In the aftermath of the attack, a number of Republican presidential candidates and elected officials issued tweets that, many have argued ad nauseum, demonstrated a commitment to public piety instead of public policy as a response to the massacre. In a rare moment, news and social media outlets in the U.S. became a forum for a surprising debate about spiritual disciplines—the meaning and import of prayer.

Layered approaches to prayer and “prayer shaming” dominated public discourse in the days following the shooting. On the right and left, religious and non-religious alike debated the efficacy and appropriateness of prayer. A select set of Senate Democrats tried to foreground the issue of gun control but to no avail, failing to upend the National Rifle Associations’ lucrative death grip on the trigger conscience of the Republican Party. Republicans voted down expansions of background checks that would include stricter limits to online and gun show purchases and the prevention of firearm sales to persons on the terror watch list.

People of faith have a sacramental duty to hold lawmakers accountable for protecting the sacredness of human life. While we debated prayer and deconstructed the meaning of prayer in its myriad forms, how many actually thought about the victims—in San Bernardino, as well as in the other 352 mass shootings that have happened in the U.S. this year?

The tragically familiar experience in San Bernardino is not about prayer, but the policies in the U.S. that create virtually unrestrained and unregulated access to firearms and the exacerbated culture of death-dealing. Defenses of prayer can be just another guise for the Right’s unrelenting and long-tenured defense of guns. Andy Parker, father of Alison Parker, the Virginia news anchor who was murdered in August while reporting live, suggested that these invocations of prayers and positive thoughts are code words for deliberate political inaction by elected officials. The theological commentary on this shooting is what my grandmother would describe as “too heavenly minded and no earthly good.”

These conversations about prayer reflect a graver moral issue than “prayer shaming” during a time of tragedy. Since the beginning of this year, 12,223 people have been killed in gun-related incidents in the U.S. and the number of people fatally shot by American police officers approaches 1,000. Pointing out a national moral failure and theological treason is not “prayer shaming.” We must raise our voices in the key of hope until Capitol Hill sees what we see: preventable social and personal pain caused by guns.

I am reminded that as Jesus prepared his disciples for his death (a state-sponsored death sentence) he gathered them around a table for a familiar meal endowed with rich cultural memory and theological relevance for his people—a people familiar with death, oppression, and liberation. At this last Passover celebration, Jesus entreated his friends to perpetuate the act of consuming everyday victuals—bread and wine—in remembrance of him: a simple meal transformed into a political act of remembering. This episode communicates a sacramental truth of a way that faith prioritizes keeping the dead alive through the way we live.

What will we do in remembrance of the dead?

The nature of the tragedy in San Bernardino has been normalized as a seemingly immutable daily fact of American life. Gun violence in the U.S., as intimated by President Barack Obama, is unparalleled anywhere else in the world; it defines a uniquely American experience.

The gun is one of the American gods, and its holy canon is the Second Amendment. We look through the warped window of the religion of America and find guns affixed to its throbbing heart. In 2013, Public Religion Research Institute reported that only 38 percent of white evangelical Protestants favored the passage of stricter gun control laws, while 59 percent opposed them. In contrast, stronger legislation to limit public access to guns was favored by 57 percent of white mainline Protestants, 76 percent of Black Protestants, 67 percent of Catholics, and 60 percent of the “Nones.” These statistics squarely point to the trend that white Evangelicals are the only Christian subset in America with a majority opposition to increased regulation of firearms. Even in the immediate aftermath of last week’s shooting, Jerry Falwell Jr., the president of Liberty University—one of the collegiate hubs of the religious right—incited applause from the student body as he cast a vision to “end those Muslims” in the event of an attack at the university by arming themselves with concealed handguns.

But when we’re done prioritizing the talk about prayer and using “hashtag spirituality” to advance our own agendas, what we’re left with is an American crisis that is, or certainly should be, a platform for thinking deeply about guns, human worth, and public safety. To turn this moment into a moment about prayer is to make it about religion instead of people, policies, and the violent history of the U.S.

Farooq and Malik were not motivated by religion. They were motivated by hatred, and enabled by a heritage of violence politically maintained and financially undergirded by policies that make firearms easily accessible. Syed Farook proved to be more American than Muslim. Radicalized or not, Farooq and Malik embodied the logic of America in their attacks.

Equally as jolting as the heinous act itself is the method of the attack, which appears dissimilar to ISIS-directed attacks in Europe. The most common form of ISIS-inspired terrorism to date is suicide bombing, not mass shootings. Farook and Malik exacted terror on American soil in a form of violence reminiscent of fatalities that occur almost daily in this country, enabled by a warped interpretation of the Second Amendment.

Perhaps most offensive of all, these moments of national tragedy offer a window into the quotidian realities of people of color living in urban centers. They serve as reminders of the violence that has disproportionately trailed Black bodies in White America since slavery.

The threat of execution that stalks black and brown bodies more than anyone else creates a deeply rooted anxiety that cripples authentic living. This is worthy of our thinking, writing, debating and voting. White evangelicalism, as a political ideology, hijacked this moment with anemic theological impositions when American communities, especially those of color, hungered for political solutions to preventable death. In remembrance of every enslaved African that longed for freedom under the irrational threat of violence, the Native American victims of Wounded Knee, and every interned Japanese American, we make America redeemable by the policies we pass between prayers. In remembrance of the dead, we turn our collective power as voters and democratic participants into sacred acts.

Through political action, people of faith and conscience ritualize hope and create space for prophetic grief in spite of—in defiance against—the starkly American narrative of hatred and violence. I value the creation of space for people of all faiths to connect with the sacred during times of tragedy such as this one. There is a way to conceptualize prayer that collapses the binary of the sacred and profane: to me, policy engagement and political action that prioritize the sacredness of human life is prayer. Frederick Douglass, escaped slave turned abolitionist, averred, “I prayed [for freedom] for 20 years but received no answer until I prayed with my legs.”

We can ritualize hope not only by venting grief through hashtags, but through robust conversations about the futures of people that lead to unbought, transformative politics. We can ritualize hope by converting our places of worship and prayer into engaged networks of action. Where guns have been used to diminish the freedoms of individuals, we can ritualize hope by parading to the polls to embody freedom—an act of civic responsibility transformed into a spiritual act of remembering.