Humiliated and crushed by Trump, Jeb has one way to get respect again: Declare he won't back the blowhard for prez

Bush has been emasculated by Trump. The most honorable thing Jeb could do is vow to never support him in the race. 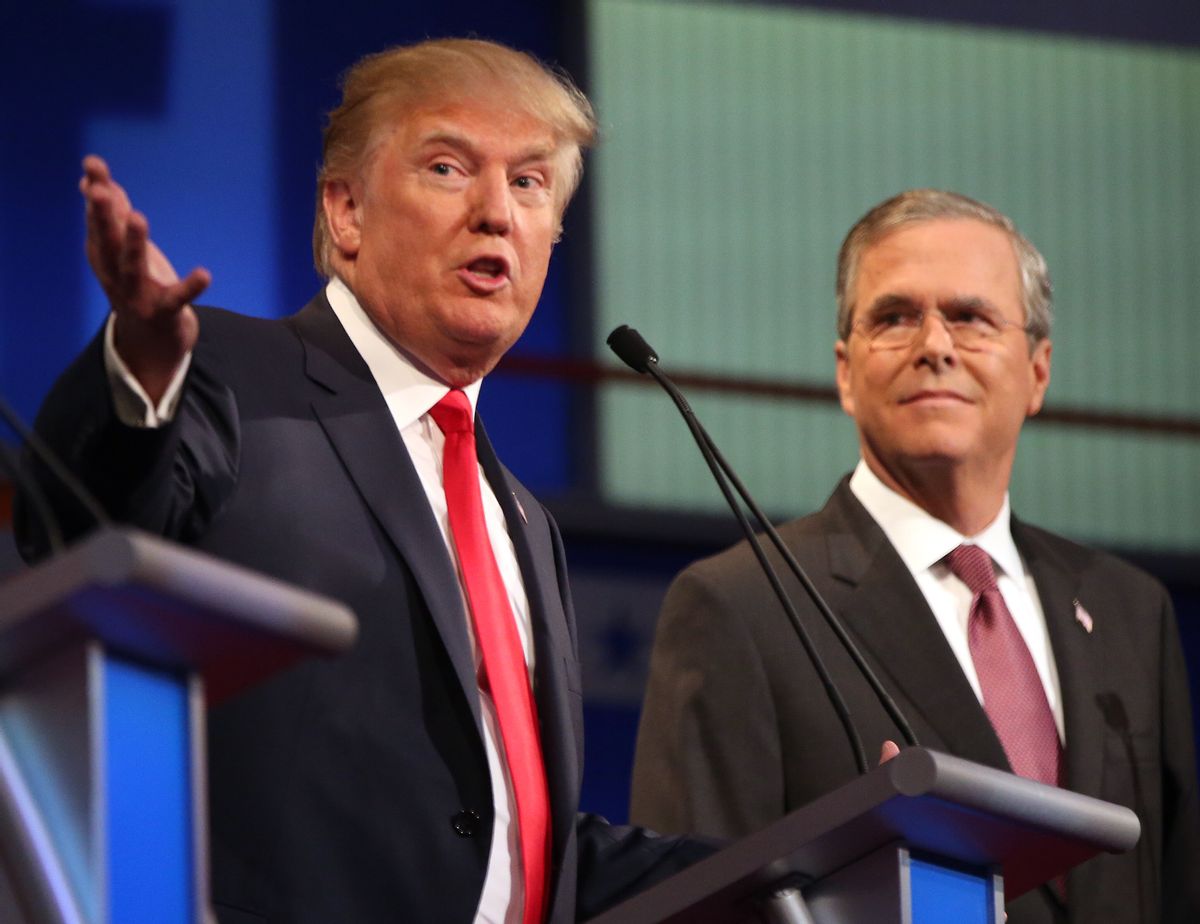 FILE - In this Aug. 6, 2015, file photo, Republican presidential candidates Donald Trump and Jeb Bush participate in the first Republican presidential debate at the Quicken Loans Arena in Cleveland. Presidential debates were big draws and big business for the networks that presented them in 2015 _ at least, when Donald Trump was involved. The first Republican debate was watched by 24 million viewers, the highest-rated broadcast in Fox News Channel's history. (AP Photo/Andrew Harnik, File) (AP)
--

There are many reasons why that’s the case. Most obviously, he’s a bad candidate. A lumbering wonk, Jeb is about as dynamic as a doorknob, and that won’t cut in a field dominated by fiery demagogues and faux-populists.

There’s also the Bush name. Jeb may be smart and reasonably competent, and perhaps he would make a decent president, but that doesn’t matter – he can’t shake the tainted legacy of his brother, arguably the worst president in modern American history. Even worse, when Jeb had the opportunity to distance himself from George W. Bush, which he had to do at some point, he did the opposite.

In a decidedly anti-establishment climate, Jeb’s candidacy never made any sense. Jeb has had every organizational and financial advantage a presidential candidate could hope for, and he’s still floundering. Conservatives are clamoring for something different, something new, and Bush fails on both counts.

But there’s another reason why Jeb won’t be president: Donald Trump.

Since the first debate, Trump has slowly emasculated Bush, pummeling him with insults and attacks. Bush has tried, rather clumsily, to counter Trump, but this was a fight Bush was destined to lose. Trump doesn’t give a damn about decorum or facts; he’s an entrepreneur with a talent for self-promotion. Jeb’s terrain is policy. Engaging Trump on this front is impossible, because Trump doesn’t do policy and, more importantly, neither does the conservative base.

Jeb was right when he told Trump at the last Republican debate that “You’re not going to be able to insult your way to the presidency.” However, it’s pretty clear that Trump can insult his way to the Republican nomination. And that’s the problem.

Trump has made a mockery of the process, and it appears nothing can stop him at this point. Whatever you think of his politics, Jeb is at least a serious person. His views are retrograde and his policies would be disastrous, but he’s not a clown like Trump. If elected, Jeb wouldn’t reduce America to a global punchline, as Trump surely would.

If Jeb cares at all about the country or his party, he should do what he is already considering doing: Declare that he would not support Trump as the Republican nominee for president. According to a recent Politico report, the Bush team is weighing their options:

“Prior to the debate, senior Bush aides began looking into the possibility of making a clear break with Trump — potentially with the candidate stating that, if Trump were the nominee, Bush would not support him. The former Florida governor didn’t go that far, but the option may still be on the table. The Bush campaign has already examined whether such a statement would disqualify him from certain state primary ballots, some of which demand that candidates sign a loyalty pledge declaring that they will support the eventual Republican Party nominee.”

As it becomes more and more obvious that Jeb won’t win the nomination, he has less to lose by denouncing Trump in the strongest of terms. After all, Trump is doing more damage to the Republican brand right now than anyone, and every day he leads in the polls is a reminder of how wayward and unhinged the GOP is.

There are some risks involved, however. For one, it could easily backfire. Trump’s outsider shtick is what has endeared him to conservatives, and a rejection by Bush, the consummate insider, would likely benefit Trump. The move would also be greeted skeptically by fellow Republicans. Rather than a principled objection, Bush’s anti-Trump stand could be seen as a desperate face-saving stunt, a way to divert attention from the fact that he’s polling at 4 percent in most polls.

Ultimately, though, this is the most honorable thing Jeb could do, regardless of how it’s interpreted. Taking a stand against Trump would do more to salvage his party and his name than anything else he could do at this point, save for winning the nomination. The alternative for Jeb is to continue throwing millions at a lost cause while sideshows like Trump and Cruz dominate the race.

Unless the dynamics of the campaign change dramatically, Bush will likely have two choices: He can lose and be remembered as the dignified candidate who singularly denounced Trump or he can just lose. And that's not much of a choice at all.