"I think it was a significant overreaction": Inside New York's ridiculous feud with L.A. over school closures

The head of the NYPD thumbed his nose at the City of Angels for responding to a terrorism hoax. But why? 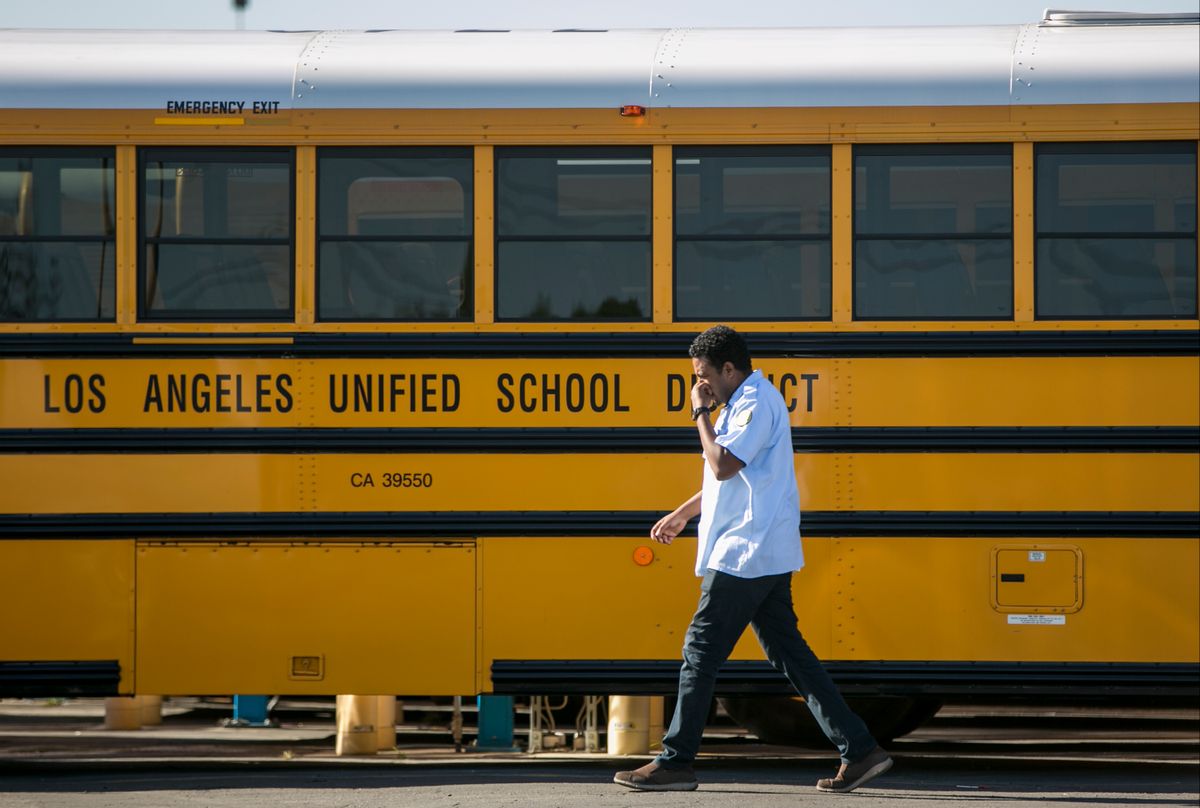 A Los Angeles Unified School District bus driver walks past parked vehicles at a bus garage in Gardena, Calif., on Tuesday, Dec. 15, 2015. The nation's two biggest school systems, New York City and Los Angeles, received threats of a large-scale attack Tuesday, and L.A. reacted by shutting down the entire district. New York dismissed the warning as an amateurish hoax and held class as usual. In LA, the threat came in the form of an email to a school board member that raised fears of another attack like the recent deadly shooting in nearby San Bernardino. (AP Photo/Damian Dovarganes) (AP)
--

So what are the families of Los Angeles to make of the public lambasting their local officials took from their New York City counterparts over the LA officials’ decision to play it safe and close their city’s schools earlier this week after getting an email that threatened Paris-type terror?

Both New York City and Los Angeles received an nearly identical email, which authorities now say was routed through an IP address in Frankfurt, Germany. It threatened to use guns, automatic weapons, nerve gas and explosive devices to wreak havoc on local schools.

Outgoing Los Angeles School Superintendent Ramon Cortines, a former New York City Schools Chancellor, consulted with security officials after several school board members received the threat. But exactly who was in the loop is a matter of some controversy.

Los Angeles is the nation’s second largest school district and the decision to close the system down was more than a minor inconvenience for the district’s 640,000 students and their parents who had to scramble for day care or had to call out from work.

No doubt the threat read differently in Los Angles, where earlier this month,  an hour drive away in San Bernardino, a 29 year old health inspector and his wife lay siege to a facility for the developmentally disabled, killing 14 and wounding 20.  That criminal investigation is still on going.

Hours after the Los Angles Schools opted to close, New York City officials held a press conference to offer details on the threat they had received and to say that Los Angeles officials had fallen for an easily discernible hoax, that their West Coast counterparts had played into the hands of the pranksters or terrorists by closing their schools without properly consulting anyone.

“As leaders, it is our job to protect public order, and to keep things moving forward in this city, and to certainly not aide and abet those who want to sell panic,” said de Blasio. “It’s very important to realize there are people who want us to fundamentally change our lifestyle and our values, and we will never give in to that.”

Aide and abet? Sounds like he was inferring that Los Angeles officials should be charged with something because they recklessly varied from the Big Apple’s superior threat-matrix standard.

Several times in the press briefing NYPD Commissioner Bill Bratton, who was previously L.A.'s top cop, said the city superintendent had closed the schools without consulting anybody and yet left himself some wiggle room.

“To disrupt the daily school schedules of a half million school children, their parents, daycare, busses, based on an anonymous email with no consultation, if, in fact consultation did not occur with law enforcement authorities. I think it was a significant overreaction,” said Bratton.

Hmmm. When you put “if” so close to “fact,” and follow it up with such an empirical statement, it leaves room to wonder, did Bratton know for sure that LA Superintendent Cortines was just winging it?

Los Angeles police chief Charlie Beck fired back, blasting New Yorkers for second guessing his colleagues decision and asserting that the FBI and the local Joint Terrorism Task Force had indeed been alerted after several members of the local school board had gotten the email.

“I think its irresponsible based on the facts that are available to criticize that decision at this point,” Beck said.

Now with the bi-coastal banter in full lather, the New York Daily News op-ed page had to weigh in. “The closure of the Los Angeles schools on the basis of a bogus threat was an amateurish error that instilled needless fright in children and no doubt, glee in ISIS,” the hometown tabloid declared. LA had been “punked” concluded the Daily News.

Nothing like national solidarity in a time of high global anxiety.

Commissioner Bratton even went to the unusual length of disclosing how he knew the email was a hoax, by divulging the "tell" that confirmed the author was not an authentic terrorist, because they had failed to use a capital A in spelling "Allah." (Note to next prankster: Always use upper case.)

Both jurisdictions confirmed they were unaware the other had been threatened. The New York Daily News reported that New York City shared the email they had received with Los Angeles officials after they had opted to close their schools. In both iterations, the anonymous correspondent complained of being bullied for four years in each school district, a claim that was on its face impossible according to the tabloid’s reporting.

So just where was the multi-billion dollar post-9/11 Homeland security apparatus that supposedly has our backs through all of this? In the TV propaganda representation of our national security machine, there is supposed to be a secret command center into which all these regional threats are sent and worked into our national situational awareness. No doubt Congress needs to swear in some witnesses and find out the precise narrative for who was consulted and when in Los Angeles.

Eugene O’Donnell is a former NYPD officer and prosecutor and professor at John Jay College. He thinks its a mistake for one local jurisdiction to undermine another so publicly. “I don’t think sorting this all out is best done in the media,” says O’Donnell. “Who would want to be the person that kept the schools open and have an attack happened?”

(While O’Donnell thought Bratton’s disclosure to the press of the failure to capitalize Allah was very unusual, Casale theorized Bratton was “mocking the sender of the email to tempt him to communicate again so they could apprehend him.”)

“Each local school district in cooperation with the local police and the FBI have to make a decision that takes into consideration the regional issues, so no doubt Los Angeles has to be conscious of San Bernardino,” says Nick Casale former NYPD detective and the first first Deputy Director of Security for Counter-terrorism for the Metropolitan Transportation Authority.

Sad to say, we live in a time where all of our institutions are struggling to maintain public credibility, not because of some external threat, but because of the accumulated rot of political corruption that undermines them. We live with stories about probes of the IRS and the Secret Service.  Major corporations have to reach non-prosecution agreements and pay millions to settle criminal charges. Churches and local governments shell out millions to resolve civil complaints for bad behavior, while across the country over the years, a steady procession of local, state and federal officials have been taken off to jail.

Ironically, the FBI had just paid the Los Angeles School district a visit to seize 20 boxes of evidence as part of a Federal grand jury probe into a $1.3 billion dollar computer upgrade initiated by the current superintendent’s predecessor.

That’s the real world context officials have to operate in when they ask us to say something when we see something.

So now, if there’s an occasion where L.A. officials have to make a similar tough call in the future, should the public just blow them off as incompetent worry warts and call up the NYPD for threat validation? Sad to say, 14 years after the September 11th attack what we have on display here is a backbiting  “homeland” governed by regional chauvinists and a federal government that keeps its head low to avoid getting hit in a bi-coastal pissing contest.