Marco Rubio is pretty bad at this whole "campaigning" thing

In his latest scrap with Ted Cruz, Rubio has managed to draw even more attention to his biggest political weakness 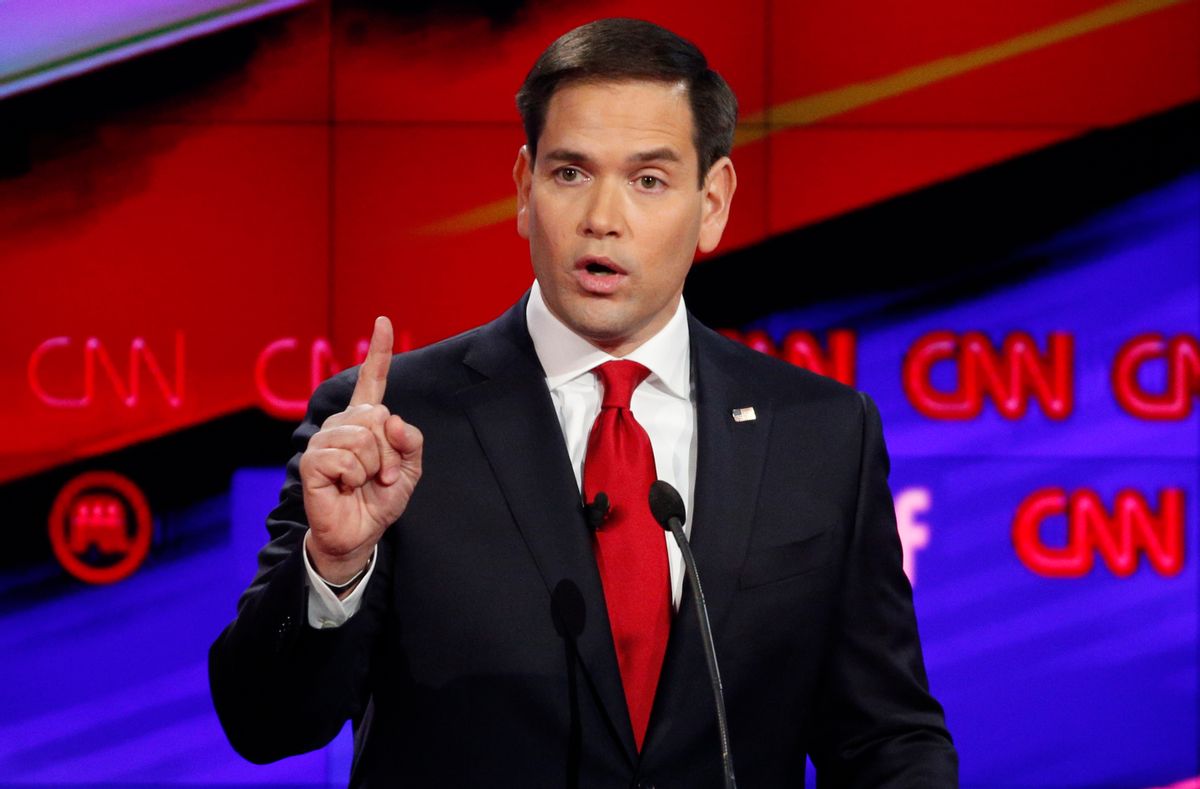 As we head into the stretch before the first primary elections are held in just a few weeks, a lot of people have been wondering what's going on with Marco Rubio's campaign. He doesn't seem to be spending his money wisely, there's a lack of personal engagement with voters, and nobody can see what his strategy is if he fails to close the deal in the early states.

Reports have it that his plan is to go on Fox News, which is presumed to be all it will take to cut the voters' current ties with Trump, Cruz and Carson and make them into Rubio fans. It's not working all that well so far, but they seem to believe that ads like his latest will start to make some converts. In it, Rubio declares his solidarity with "the essence of America" which is apparently white people who are sick of being called bigots when they complain about people of color ruining everything. Putin and Iran are bad too. And there should be jobs! He ends it with one of the most awkward lines ever uttered by a candidate:

"I approve this message, because this is about the greatest country in the world and acting like it.”

Yes, it sounds just as weird in the ad as it scans in print.

Bottom line: Rubio is the establishment choice at the moment but he's getting nowhere fast because he's running a lethargic campaign that just isn't very good. And it's not getting any better. Apparently he's decided that the best way to make people forget his immigration apostasy, when he joined with Democrats on the notorious Gang of 8 to hammer out a Comprehensive Immigration Reform bill, is to draw as much attention to it as possible by picking a losing fight with Ted Cruz. He seems to think that aggressively accusing his rival of abandoning his conservative principles in the same way he did will somehow make his own betrayal go away.

All it's accomplished is to make every conservative in the land think even less of him than they did before.

Perhaps his strategists believed some moldy old tropes about how Karl Rove and the Bush gang always won elections by going after his opponent's strengths rather than his weaknesses, but even aside from the fact that putting Rubio's own  weakness center stage was daft, attacking Ted Cruz for not being conservative enough simply doesn't track. You can say a lot of things about him but it's not believable that he was secretly in favor of "amnesty." What is believable is that Ted Cruz was doing exactly what he admits to doing: pulling a legislative maneuver to grandstand and posture, achieving nothing and getting no results. That is where his expertise lies.

The facts of this argument are not in dispute. Marco Rubio worked with Democrats and Republicans to come up with a comprehensive Immigration reform bill that included a path to citizenship. When it became obvious that the Republican majority in the House would never pass it, he backed away and eventually repudiated his own work. It is widely considered to be his greatest liability with the conservative base of the party, which considers immigration a litmus test issue.

During the debate on the Senate bill, Cruz had offered an amendment to the bill which stripped out a path to citizenship but included "legalization" for undocumented immigrants. Cruz claims his amendment was a poison pill designed to smoke out the Democrats and get them to vote against it, thereby exposing them and proving that they what they really cared about was "amnesty." There is plenty of evidence for this, including testimony from the Senate's chief anti-immigration tactician Senator Jeff Sessions, who backed Cruz's version of events.

Yes, Cruz made lugubrious floor speeches about how the bill would allow immigrants to come "out of the shadows" but there was nobody who believed that Cruz actually meant it. After all, both Sessions and Senator Mike Lee voted for his amendment, and their hostility to immigrants is indisputable. Sahil Kapur at Bloomberg reported that Sessions' spokesman explained it this way:

"Numerous conservatives offered amendments to the progressive Gang of Eight bill that were designed to improve enforcement or combat amnesty.That does not mean these Senators supported the bill with those changes. That would be an extremely untenable interpretation."

It was clearly legislative kabuki. It wasn't particularly successful, but then Cruz's tactics rarely are. Indeed, this one seems to have been too clever by half, since it has caused him to have to try to explain to people who don't follow congressional gamesmanship (and Fox News anchors) that he really didn't mean what he said he meant. Nonetheless, there is no doubt that Cruz is true blue when it comes to opposing "amnesty." And Rubio is not.

The big question is why these people are so adamant about opposing a path to citizenship in the first place. Sure, many of their voters are xenophobes and nativists and would give them hell for allowing all these "foreigners" to continue to destroy our way of life. But there is something much more cynical at play. It is an article of faith among conservatives that any path to citizenship will result in millions of new Democratic voters. Ted Cruz is no exception.

Now it is true that Cruz has criticized Rubio for his work with the Gang of 8, although he's hardly alone in that, and Rubio has been on the defensive. But the result of Rubio's counter-attack is that he's made himself look worse and Cruz look better at least to the conservative validators that will make the case to the voters on their various media outlets.

Here's a sample of how they are reacting:

As hard as it is to believe, the fact that the fringy Cruz used the time-honored maneuvers of the Senate in a creative way in that episode may make him look more like a serious candidate in the eyes of average people than he was before. And Rubio, the establishment favorite allegedly endowed with gravitas and intelligence, is diminished by his attempt to make Cruz look bad for doing it. If he has learned one thing from this it should be that trying to make people think Ted Cruz isn't a true conservative isn't a very smart strategy.