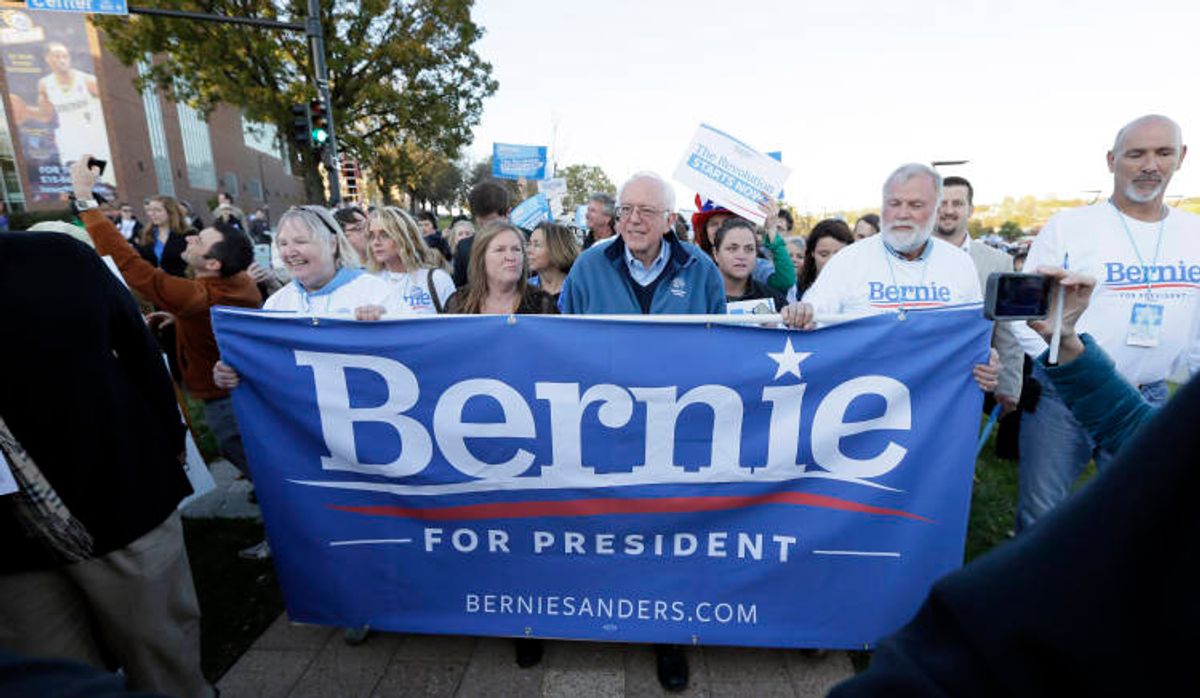 Vowing to not allow the Democratic National Committee to "sabatoge" their campaign, senior Bernie Sanders campaign operatives announced Friday afternoon that they planned to sue the Party if it continued to lock out the campaign from its own voter files.

The DNC is "actively attempting to undermine our campaign," Sanders campaign manager Jeff Weaver charged during a press conference in Washington, D.C. this afternoon. "If the DNC continues to hold our data hostage, and continues to try to attack the heart and soul of our campaign, we will be in federal court this afternoon seeking an immediate injunction," Weaver threatened.

This morning, the DNC took the unprecedented step of sanctioning the Sanders campaign for violating a breach in the firewall of the proprietary voter data files of the Hillary Clinton campaign, maintained by a third party vendor who exposed the breach when it attempted patchwork on the software earlier this week. Sanders' national data director has since been fired for the incident and the DNC has launched an investigation into the matter, denying the Sanders campaign access to its own 50-state voter database until it can prove that any and all Clinton-related documents have been destroyed.

According to CNN, the Sanders campaign said it planned to seek an injunction against the DNC Friday afternoon, "claiming irreparable harm and seeking immediate access to the voter file system."

The dramatic change in tone from the Sanders campaign comes after further reporting on Friday revealed that four staffer accounts accessed Clinton's lists of its likeliest supporters in 10 early voting states, including Iowa and New Hampshire, during the over 30 minute security breach on Wednesday. More from Bloomberg:

Though the Sanders campaign initially claimed that it had not saved Clinton data, the logs show that the Vermont senator’s team created at least 24 lists during the 40-minute breach, which started at 10:40 a.m., and saved those lists to their personal folders. The Sanders searches included New Hampshire lists related to likely voters, "HFA Turnout 60-100" and "HFA Support 50-100," that were conducted and saved by Uretsky. Drapkin's account searched for and saved lists including less likely Clinton voters, "HFA Support <30" in Iowa, and "HFA Turnout 30-70"' in New Hampshire.

"We are running a clean campaign. We are going to beat Secretary Clinton," Weaver assured reporters at Friday's press conference, explaining that “in the heat of these campaigns sometimes young people make misjudgments."

"We don’t need dirty tricks," he asserted. "To do that we are going to need our data, which has been stolen by the DNC." Weaver slammed the DNC for what he called an "inappropriate overreaction," threatening to head to "federal court this afternoon seeking an immediate injunction," if the DNC does not reinstate the campaign's access to the database.

"They not only viewed it, but they exported it and they downloaded it," DNC chair Debbie Wasserman Schultz told CNN's Wolf Blitzer after the Sanders campaign conference. "We don't know the depth of what they actually viewed and downloaded. We have to make sure that they did not manipulate the information."

"That is just like if you walked into someone's home when the door was unlocked and took things that don't belong to you in order to use them for your own benefit," she suggested. "That's inappropriate. Unacceptable."

For their part, the Sanders campaign has added this latest penalization to a list of DNC sanctioned disadvantages. "We obviously have concern about the Saturday night debate schedule and its impact on the ability of campaigns to get their message out," Weaver added, raising concerns over the DNC's decision to hold only one televised weekday debate before the Iowa caucuses.

In a statement, the Working Families Party National, which offered its first national endorsement to the Vermont senator last week, called on the DNC to end the sanctions against Sanders.

"Last week, the Working Families Party chose our candidate, and today, it looks like the DNC has chosen theirs," National Director Dan Cantor said. "[I]f the leaders of the Democratic Party are truly conducting a fair primary process, they'll take their thumbs off the scale and restore Senator Sanders' data access right away."