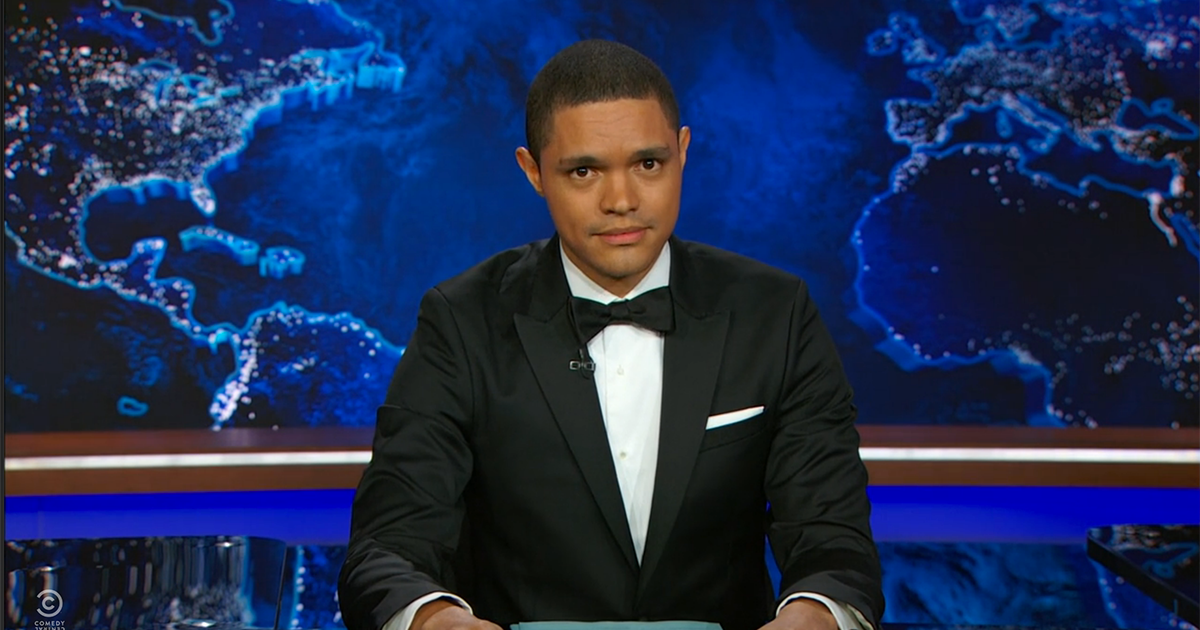 But, Noah said there were fun things too, like when a piece of fabric divided a nation, flashing a photo of the Confederate flag. "No, no, not that one!" Noah said before it changed to the gold/white or blue/black dress.

"2015 was also strangely the year of 2016," Noah said about the upcoming election. It was the year of gay marriage but also of Kim Davis.

Jessica Williams walked us through the bizarre lip challenge, the Drake video of "one man's struggle stuck in a tanning bed," and of course ebola.

Roy Wood, Jr. accused Noah of being a buzz kill when Noah brought up the Black Lives Matter movement. His positive news was pharma bro Martin Shkreli's assholery who finally got his just desserts.

Jordan Klepper came out in his leather jacket to prove he's the bad boy of the staff, asking who he'd be adding to his 2015 bad boy crew. A photo of Bill Cosby appeared on the screen, "Ok, not him," Klepper quickly said. "That's the wrong kind of bad boy." Then Robert Durst appeared. "Fuck! Not that guy! No!" Klepper said. He wanted "bad boy" to mean more like cool bad boy, "someone who could appeal to the kids." Then a photo of Jared Fogle appeared. "No! That is not what I meant! These guys are not in my crew, Trevor, I swear!"

Desi Lydic and Hasan Minhaj talked about a woman being put on the ten dollar bill and two women who should absolutely not deserve that honor. First the Hungarian reporter who tripped the refugees fleeing. "Wow, it looks like Trump finally found his running mate," Minhaj said. Then of course there's Rachel Dolezal. "She'd probably be on a counterfeit ten dollar bill," he joked.

Ronny Chieng wrapped up the Year in Animals which included Pizza Rat, which Chieng didn't understand because "gravity is doing most of the work." Chieng wasn't impressed, "it isn't like he was dragging it up the stairs!" Because Pizza Rat gave up, Chieng called him a quitter because he didn't even eat it.

Check out the hilarious recap below: