The paper of record was forced to revisit a now-compromised story that helped inflame Islamophobia in the U.S. 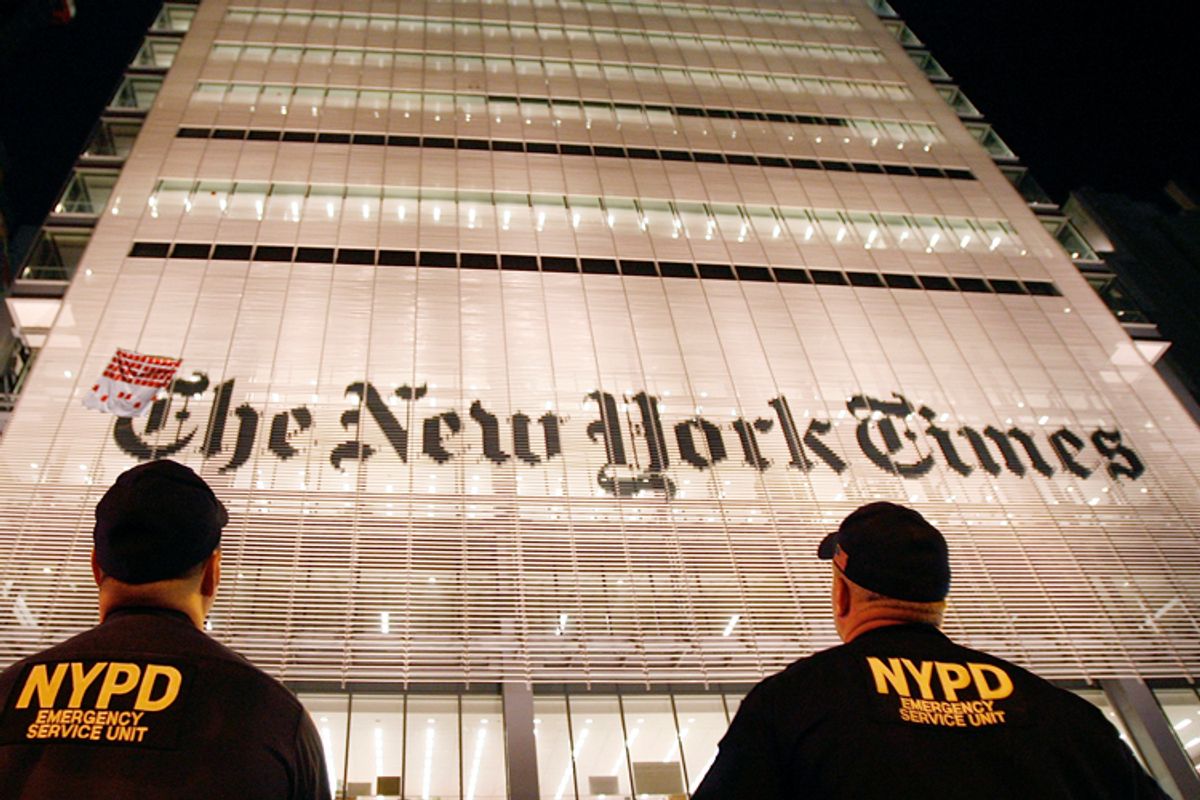 It is easy and perhaps unfair for a non-reporter to criticize the work of beat writers at major daily newspapers. As best I can tell, beat reporting is an incredibly difficult gig. You work long hours on tight deadlines for low pay in an industry that is in a perpetual existential crisis about its future. You have to find and develop sources you can trust who will give you good information, while wondering if you are being used to push someone else’s agenda in return. You see people in their lowest, most vulnerable states and walk a fine line between exploiting them to sell papers or generate clicks and telling interesting stories. You are generally hated by the public and held to a high standard for truth and accuracy that many of the people you write about are not.

That said, when you report on enormous national stories for the New York Times, you know your work could have an almost incalculable impact on the opinions the public will form about the subject. When the event you are reporting on is a terrorist attack that touches the hot-button issues of gun control, immigration, racism, the presidential election and the War on Terror all at once, sloppiness like this apparently-now-debunked story claiming San Bernardino shooter Tashfeen Malik openly bragged on social media about her desire to commit jihad is beyond unacceptable.

And when you are the same reporters -- seriously, two of them were the same exact reporters -- who just a few months ago were responsible for this epic failure of journalism, I think it’s fair to say your annual performance review should be a harsh one. Assuming you haven’t been fired for outright incompetence before then.

The bungled story about Hillary Clinton being the target of a criminal investigation over her use of a private email server was bad enough. Despite the Times later admitting the story was wrong in almost every way, the possibility that federal indictments were inevitable for Clinton were a staple of right-wing rhetoric for much of the fall. I’m betting it will get resurrected sometime in the next few months if Clinton clinches the Democratic nomination, and she and her defenders will have to spend yet more precious campaign time knocking it down. Because once a story like that settles into the partisan fever swamps, it never dislodges no matter how untrue it happens to be.

But the Tashfeen Malik mistake might be more unforgivable. The consequences of getting that one wrong are likely wider than convincing people who already hate Hillary Clinton to hate her more. To take one example, several candidates in Tuesday’s GOP debate cited the government’s failure to turn up Malik’s alleged social media postings as the product of a politically correct Obama administration’s unwillingness to do everything in its power to keep America safe. This feeds the general climate of paranoia and fear of Muslims that has taken hold in the country, particularly on the right wing, where the top presidential candidate has seen his poll numbers rise after calling for banning people like Malik from entering America. Combine that with this year’s record gun sales, concerns about jihadis using the Internet to recruit followers to their cause, and the rise of anti-Muslim hate crimes since the San Bernardino shootings, and mistakes of this sort are like tossing gasoline on a fire.

The Times has a deserved reputation for being one of the world’s leading newspapers. But incidents like these two remind us that the paper also once let the George W. Bush administration make its case for invading Iraq by feeding bad information to the credulous and inexcusable Judith Miller, who then spent months splashing it across the front page. We’re also reminded that it was its correspondent Jeff Gerth’s sloppy reporting during Bill Clinton’s presidency of the Whitewater controversy that led federal investigators to spend several years and millions of dollars chasing Clinton misdeeds all over Washington and Arkansas. That all those investigations ever turned up was the president lying about a blowjob is one of the more absurd spectacles in the long history of absurd spectacles in American politics.

So I hope that the Times, along with its reporters, have a good mea culpa for this latest screw-up. Their paper’s readers deserve that much.