Debbie Wasserman Schultz must go, and the case Bernie Sanders must make tonight

The chairwoman is the Democrats' version of Katherine Harris -- inept, in the tank, and no longer to be trusted 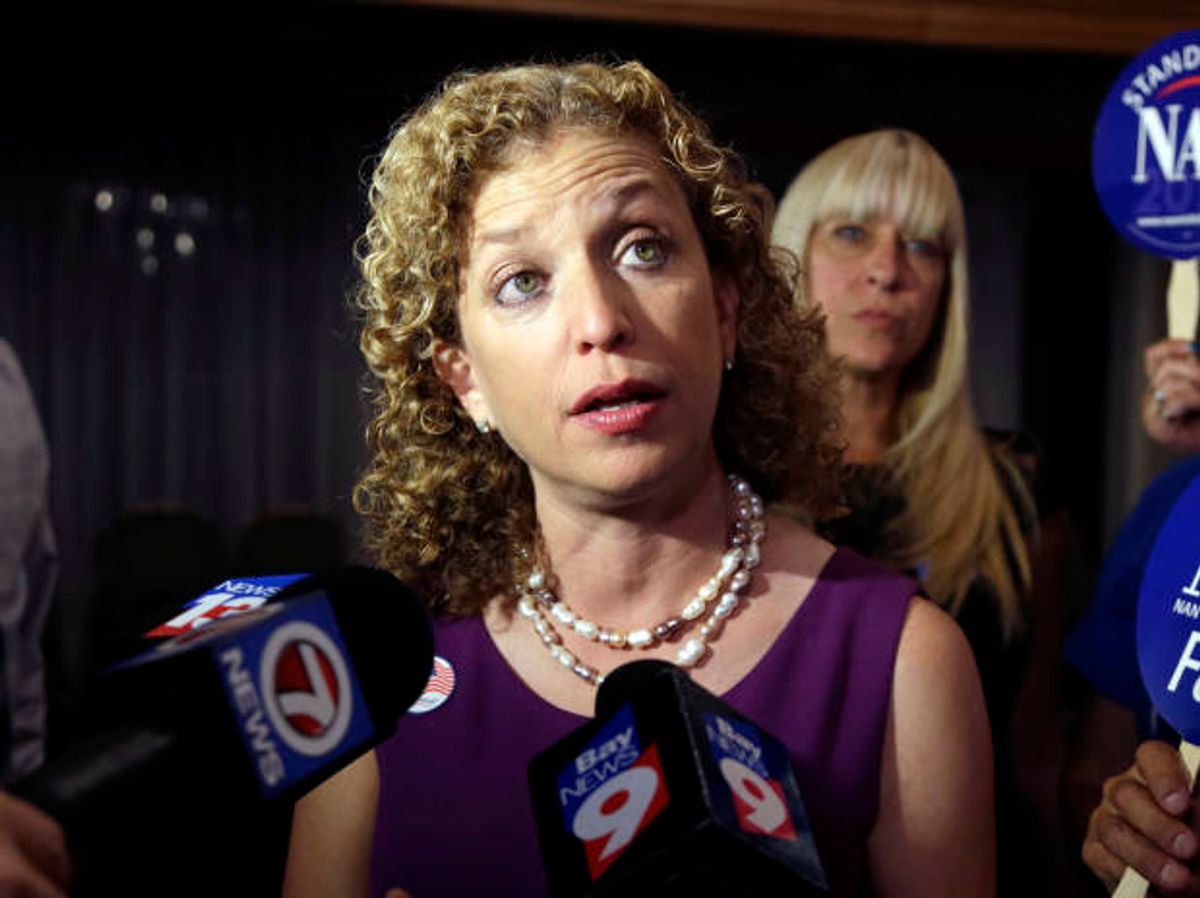 `Tis nearly the night before Christmas and not a creature is stirring, what with everyone out at a party, multiplex or mall. What better time for a presidential debate?

That at least is the view of DNC chair Debbie Wasserman Schultz and the Clinton campaign, from which she takes her cues. They wanted the fewest possible voters to see the fewest possible debates. So we went from 26 debates in 2008 to six debates in 2016, three of them on weekends. It’s called the Democratic Party, but no one other than Clinton and Schultz had any say in the matter.

On Thursday, the DNC told the press a contractor inadvertently breached a firewall in a software program exposing data files of presidential campaigns and that a Bernie Sanders staffer (Josh Uretsky, with the campaign three months) took the opportunity to sneak a peek at Hillary Clinton’s files. Sanders’ campaign instantly sacked the staffer but Schultz still cut off its access to data, a punishment she seems to have made up on the spot, thus bringing crucial outreach and fundraising efforts to a halt. Schultz didn’t even nod to due process, pronouncing the death penalty without so much as reading Sanders his Miranda rights.

On Friday, Sanders’ campaign filed a federal lawsuit alleging breach of contract. It sought a restraining order and money damages that, assuming the facts set forth in the complaint, exceed a million dollars a day. It was a strong case. Uretsky may have behaved unethically but there was no malice aforethought-- the forbidden fruit fell in his lap—and from the moment the campaign learned of his possible malfeasance, it acted honorably and swiftly. Schultz, conversely, appears to have acted without color of authority under law, contract or party rule.

The contract required written notice of termination and a 10-day grace period to cure any alleged default. Clearly the DNC was in violation, not Sanders. Because the contract put the onus for securing data on the DNC, it was liable for the breach as well. But the issue was bigger than mere contract law or political dirty tricks. In suspending the vital operations of a presidential campaign, Schultz trespassed on the right of all citizens to free and fair elections. Democrats could ill afford to be seen condoning her actions. Nor could they afford to pay her bills. If she acted without authority she’d be liable for damages, but only if the party was as swift and honorable in dealing with her as Sanders was in dealing with Uretsky. The party also had to ponder the sworn depositions Sanders might now take regarding such delicate matters as who Schultz spoke to about her decision to impale him.

The long dormant Democratic base should have stopped her Schultz when she squelched debates. Now party leaders had to, or else hop on board her runaway train. But Thursday and then Friday passed with the leaders silent save for the sound of Schultz spewing venom at Sanders. Then a miracle happened. For the first time since the dawn of the Obama era, and arguably since the end of the Viet Nam War, progressive rose in mass protest of party elites. Petitions poured in to the DNC by the tens of thousands demanding that Sanders access to his data be restored. Shortly after midnight Saturday morning, the DNC caved to the pressure, albeit so gracelessly as to ensure ongoing recriminations.

Schultz must go. Her subversion of due process puts one in mind of her fellow Floridian, Katherine Harris, who back in 2000 saw no conflict between her roles as chief state elections officer and campaign chair for George W. Bush. For all her annoying public petulance and backroom double dealing, Schultz has performed a service to her party and her country. She meant to give Hillary an assist by embarrassing and impeding Sanders. Instead she grew the audience for Saturday night’s debate and the traffic on Bernie Sanders’ web site. Thanks to her, this could really be the weekend when the force awakens. But much depends on Sanders, how he performs tonight; how he runs his campaign from her on out.

Schultz handed Bernie Sanders a gift, but to put it to its best use he must do three things. All are things he can do but has thus far elected not to do. He can confound the polls and alter the course of this is a gut check. Here’s what I hope his gut is telling him.

1. Clarifying a choice isn’t ‘negative politics.’ This week Sanders pulled an ad that merely said Clinton took money from “big money interests.” In their last debate Clinton made the preposterous claim that her love for Wall Street was somehow connected to 9/11. It fell to Twitter  to challenge her. When Sanders observed that Wall Street was her “major campaign contributor,” Clinton cried foul. He should have looked her in the eye and said he wasn’t calling her corrupt, he was calling the whole system corrupt, that pay to play politics was the cause of the slow death of the American middle class and that the reason he should be president instead of her is that he knew it and she didn’t. It would have been some debate after that.

Sanders doesn’t want to be the guy who softened Clinton up for the Republican kill so he keeps hitting his own mute button. Trump threatens to run as an independent if Republicans don’t “treat me fairly.” Sanders gets knifed by Schultz and can’t call for her removal, only an audit of DNC management practices. Chicago Mayor Rahm Emmanuel ought to be impeached. Clinton stands by him. Sanders criticizes him, but never by name. He should lead the charge against Schultz and Emmanuel. It isn’t negative politics. It’s a fight for the soul of the Democratic Party.

2. Sanders must engage issues of national security more fully and directly.  On the stump and in debate he tends to switch topics. The last debate came on the heels of the Paris attacks. In his opening remarks Sanders devoted all of two sentences to it. Four days later he gave a “major speech” explaining what ‘democratic socialism’ means to him. No one wants ISIS hijack the election, but Sanders must learn what Obama at last seems to grasp. It isn’t only reporters and the fear-mongering Republicans who question our policy. People are scared. And the policy has failed.

War is the health of the Republicans, not least because it keeps our minds off other things. Sanders wants to talk about economic issues but to clear the conversational space he must first tell us of how he’d make us safe. There are progressive answers and Clinton sure doesn’t have them. In this week’s Republican debate, she’d have sided with the interventionists against those who question the strategies of regime change she has long championed. In a debate between her and Trump, he’d be the one urging caution on deploying ground troops. Nor can we leave it to Rand Paul to make the progressive case.

Bernie Sanders must lay out both the facts and a vision. He must say that nuclear weapons and standing armies won’t defeat terrorism and that it is folly to go on pouring money into them; that we must end the secrecy that enabled politicians to lie their way into the traps of Viet Nam and Iraq; that climate change with all its droughts and disastrous weather events is indeed the greatest threat to our security now, not a hundred years from now; that globalization has spawned a permanent underclass filled with aimless, hopeless men from which both Dylan Roof and Tamerlan Tsarnaev sprang and that economic justice is the long term key to winning the ‘war on terror. He must say that in this ‘post 9/11world’ the United Nations, not the United States, is chiefly responsible for resolving global conflicts, resolution and that if it fails in its job our first job is to help it succeed.

3. Bernie can’t just call his campaign a movement, he must make it one. When I say this I hear from Sanders supporters who tell me it is already a movement and in many respects it is.  But as I often write, the biggest problem in our politics is the absence of a truly independent, progressive political movement, one in which the grass roots really get to shape major decisions; in which, when the campaign ends, the assets revert to the owners; in which there is less control but enough structure for people to organize effectively and for their voices to be heard.

With the tumbrils rolling in the streets and the nation sensing itself under siege, the Democrats are preparing to run as the party of the status quo. If polls prove right, the election will offer a stark choice between pay to play politics and what smells like fascism. It isn’t as safe a bet as some seem to think. The politics that spawns fascism may not be the best politics by which to defeat it.

We can defeat it. Bernie Sanders can by winning, or by winning enough to build a movement that brings the Democratic Party its first real platform fight in fifty years and that lives on as an independent force for change. Great things have happened for the Sanders campaign. In the teeth of the polls and the media, the Working Families Party and the Communications Workers of America made gutsy endorsements. Then Debbie did her part. You can feel a new energy in the air. It feels like a movement. The force awakens.