Hello Barbie's war on imagination: The childhood-destroying gift you don't want to give your kid

Internet-connected toys threaten to replace imaginary friends -- and parents. They're inevitable, but we can fight 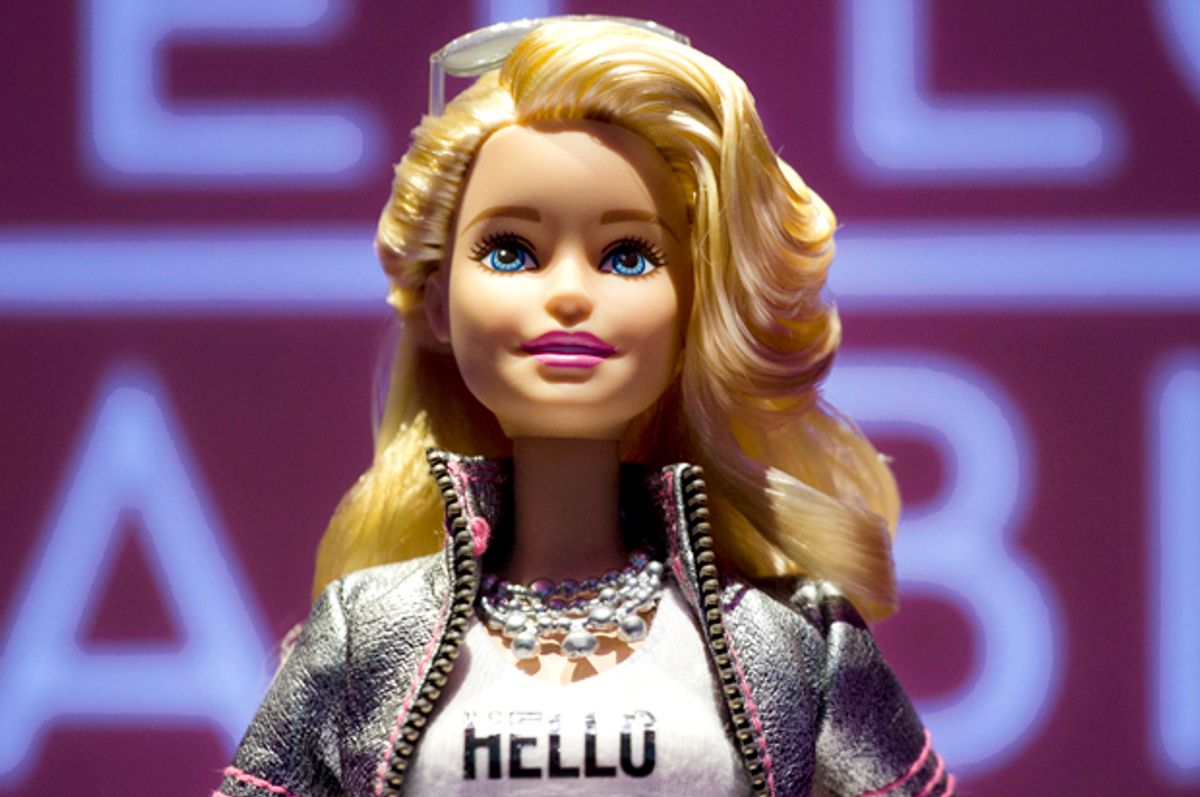 Every single morning before breakfast, my five-year-old daughter and I play with Bagel Bear and Walter the Alligator, two dilapidated stuffed animals that have been in our family since she was a baby. During a lifetime of play, these threadbare toys have served as imaginary siblings, students, library patrons, restaurant guests, archeologists, criminal masterminds and astronauts.

It is an exhausting way to start my morning, and thanks to the wonders of the Internet Age, I don’t have to do it anymore. For seventy dollars, I could buy my daughter a Hello Barbie this holiday. This Internet-connected doll will chat with her like an imaginary friend, tell her stories, play games with her, and even monitor her conversations.

My stomach hurts when I think about some computer-stuffed doll replacing my role in her imaginary games. Every morning, I follow in my daughter’s wake during these epic play sessions, carried back to the imaginary places I used to visit as a kid.

But these toys are truly the future. Toy and app makers have created thousands of digital doodads to replace imaginary friends and real-life play with parents. From virtual reality goggles to talking dolls to solitary apps, digital toys threaten to destroy make-believe play traditionally shared between caregivers and kids.

These artificial companions offer a seductive promise for adults: they handle all the hard work of talking, reading and playing with our kids. Parents must refuse to outsource imaginary play before these toys rule the market; we must decide right now to never accept a hollow simulation of the fundamental make-believe activities that parents and kids share.

You can see Hello Barbie in action in this video recorded at the toy’s release earlier this year. A perky sales attendant explains the digital charms of this new doll: “As you can see, Hello Barbie really brings out Barbie’s personality. It’ll help deepen the relationship that girls have with Barbie. And then, over time, through the questions and answers and the imaginative play, she’ll really become the child’s best of best friends.”

Kids turn on Hello Barbie with a belt-buckle power switch. The doll has a microphone and speaker hidden underneath a fake gemstone necklace. Just like the voice-activated personal assistant apps on your smartphone, kids need to press and hold down the shiny buckle to launch the voice recognition function. The doll converses with your child, tailoring answers to the kid’s responses. Hello Barbie even learns about your child through conversation, a lo-fi HAL 3000 from "2001: A Space Odyssey" channeling a perky and dopey teenager.

“I'd love to learn more about you. Oh, I know! Let's make a game of it. The game's called Family Town! We're gonna pretend all of your family members run different shops in a make-believe town! I'll be a visitor and you'll show me around! So ... what's the name of your family's town? I think I'm gonna like it here! Okay, so every member of your family gets their own shop. One per person! I'll visit each shop, and you'll tell me who runs it! Got it?”

This kind of casual conversation triggered warning bells among activists. The Campaign for a Commercial-Free Childhood (CCFC) suggested that Mattel should shut down production of Hello Barbie altogether. In the group’s statement, Georgetown University law professor Angela Campbell worried about a digital toy probing a kid’s imagination: “In Mattel's demo, Barbie asks many questions that would elicit a great deal of information about a child, her interests and her family. This information could be of great value to advertisers and be used to market unfairly to children.”

Internet privacy experts and tech reporters blasted Hello Barbie’s vulnerable connection to the Internet, illustrating how creative hackers could infiltrate a family’s world through the device. These are valid concerns, but I am most worried about how this doll hacks straight into daughter’s imagination — it could easily kill her family of imaginary friends.

Conversations, eye contact and human voice are absolutely crucial for a child’s developing brain. Dr. Dana Suskind showed how human interaction and pretend play influence childhood development in her eye-opening new book, "Thirty Million Words: Building a Child's Brain." “The basis of language, of words, is to connect humans to other humans,” she wrote. “A baby’s brain is a result of that evolutionary history. It does not learn language passively, but only in an environment of social responsiveness and social interaction.”

Since the 1970s, child development experts have proven over and over again that a child’s brain grows through human interaction — a fundamental part of human experience that cannot be replicated by a computer. Human-led conversations, reading sessions and pretend play are as important as vitamins and a healthy diet for children’s brains.

Psychologists Dorothy G. Singer and Jerome L. Singer spent many years studying the art of play and imaginary friends. In "The House of Make-Believe Children’s Play and the Developing Imagination," they summarized decades of research into imaginary friends and pretend play: “The evidence that a child has an imaginary playmate seems to be an especially powerful predictor of the likelihood that a child will play happily in nursery school, will be cooperative with friends and adults, and may use somewhat more extensive language, while also being somewhat less likely to watch a good deal of television,” they concluded.

Psychologist Eileen Kennedy-Moore listed more benefits of imaginary friends: “compared to those who don’t create them, children with imaginary companions (either invisible friends or personified objects) tend to be less shy, engage in more laughing and smiling with peers, and do better at tasks involving imagining how someone else might think.”

Knowing all the benefits of imaginary friends and interactive pretend play, why would any parent use digital alternatives to imaginary playtime? Maybe because apps have become such a major part of our lives, including a flood of “interactive” digital content for kids.

Only a bare fraction of these digital offerings actually encourage kids to use the app with parents — sacrificing the crucial human interaction that growing brains require. The Joan Ganz Cooney Center released a report last week called “Getting a Read on the App Stores : A Market Scan and Analysis of Children’s Literacy Apps,” sifting through a representative sample of the thousands of apps for kids. “We found only two in our sample of 170 downloaded apps that were designed with explicit co-use functions,” they wrote.

Devices alone will never stimulate imaginary play. But they can help! A tablet or a smartphone is like an airplane, capable of performing amazing feats of creativity and imagination. Sadly, most kids only use these machines to drive lazy circles on the ground. We must work hard to nurture kids' imaginary worlds in the 21st century. Instead of solitary experiences with Internet-connected dolls or apps, parents can use creative apps alongside kids. I recommend parents start with The Electric Company Party Game or Sesame Street Family Play app. Instead of letting kids play passively on a smartphone, these apps suggest games that adults and kids can play together in real life.

Dr. Suskind warns us in her book that we take this step at our peril: “Digital devices do not Take Turns; they take absolute concentration. Their part of the interaction is set; nothing can alter it. Even answering ‘questions’ correctly only means a child is following orders, not giving and taking.” Classic science fiction is brimming with examples of kids raised by robots or artificial intelligences. It’s like Ray Bradbury’s “The Veldt,” a famous short story set in a world where computer screens and AI do all the teaching while parents enjoy apparently boundless leisure time.

"Maybe I don't have enough to do. Maybe I have time to think too much,” complains one parent in Bradbury’s story, a science fiction prediction that seems ludicrous in the 21st century. We have lots of fancy devices aimed at making shopping, driving and child-raising easier, but nobody ever complains that they have too much leisure time — our devices fill every spare moment. We radically changed our adult lives without taking time to reflect on the consequences. Our kids have already learned our bad habits.

Many years ago, I offhandedly pretended my coffee cup could talk to distract my daughter during an emotional toddler breakdown. We now speak to “Coffee Man” every single day. She imagines that Coffee Man follows us everywhere, teaching him every new skill she learned and teasing him when he couldn’t compete with her life progress.

I would never replace the lovely time my daughter spends talking to Coffee Man with some digital script regurgitated by an Internet-connected doll. My daughter will have the rest of her life to learn the joys of talking computers. But according to child development research, I only have one more year left to enjoy my daughter’s “peak” of imaginary play. I refuse to sacrifice this precious time, or hobble my daughter’s ability to believe in talking coffee cups.

That’s why we should all say Goodbye Barbie.

Jason Boog is a journalist and author of "Born Reading: Bringing Up Bookworms in a Digital Age"