It's snake oil, folks: Trump may think he believes what he's saying, but he's an opportunist gone rotten, not a true believer

Trump isn't, at heart, a fanatic or a radical. He's just playing the role to get ahead in presidential politics 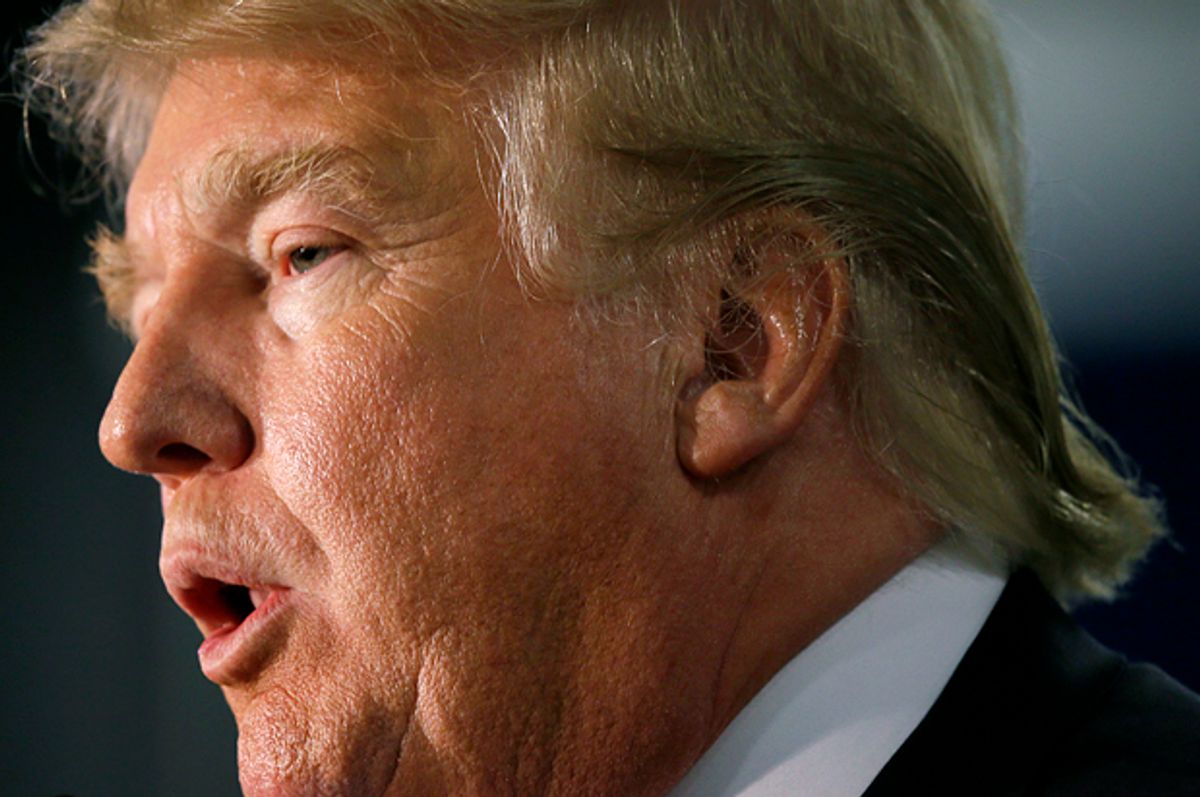 Last week, politicians, pundits and activists alike took to social media and the airwaves to call presidential candidate Donald Trump an "actual threat to national security," "unhinged" and "a bigot and a racist." It's easy to see where they are coming from; the Donald did call for the comprehensive national religious profiling and mistreatment of Muslims. But they are wrong. He's none of the above.

You see, Donald Trump is a snake oil salesman.

Snake oil can best be described today as a product whose quality or benefit is questionable or unverified. At best, snake oil is a placebo touted as a cure. At its worst, it’s a dangerous substance being foisted on the desperate and misguided, resulting in their eventual pain and suffering.

Snake oil salesmen have been around the U.S. for over 100 years, selling products that promise fantastical results and saying whatever the audience wants and needs to hear to make the sale. The ends of making a sale justify any means -- including lies and deceit -- necessary. And to stand out from a crowd, the snake oil salesman must be progressively louder, more outrageous and promise more impressive results than his competitors.

Like any good snake oil salesman -- or Hollywood method actor -- Trump convinces himself that he believes what he is saying when he says it. And because snake oil salesmen like Trump believe in themselves, they are in turn believable to others who are used to more traditional retail politics, where candidates rarely commit so emotionally to their political statements and platforms. So long as what Trump is saying is attracting the desired response from enough Americans, he will continue saying it, and continue believing it.

But Trump is not a fanatic or a radical at heart, no matter how many smart people say it to be true. He's just playing the role to get ahead in the horse race of presidential politics. He doesn't permanently believe what he is saying. His historical track record of statements is muddled enough to show that he’s an opportunist gone rotten, not a true believer. He will readily discard any belief if it proves to be ineffective at maintaining his hold on a certain vocal and disaffected slice of the electorate that is so dissatisfied with the mainstream solutions that they are willing to buy the snake oil.

Even if Trump is just playing a role, snake oil is dangerous. It gets people's hopes up and lowers their respect for honest salesmen (and yes, semi-honest politicians) trying to make a living selling real wares and goods. Political snake oil, a mix of fantastical promises and redirected anger, can be extremely dangerous.

Trump, the snake oil salesman, is at the front of the pack today in part because he has no obligations or commitments to the Republican Party, interest groups, political donors or a discernible ideology.

"Nothing is off-limits, nothing is too crazy to him," Daily Beast political reporter Olivia Nuzzi said during an interview with Ana Marie Cox, talking about the topics and venues that Trump was willingly broaching and entering as he sought new ways to sell his campaign. "For a while, he was saying things, and you could see where the average voter would find it attractive ... but now we are in YouTube comment territory."

His supporters won't be affected by critical logic either, because they've willingly bought into his shtick. "Are we just supposed to take every insane thing he says and fact check it? It's not going to make a difference to his supporters," noted Nuzzi. As of Tuesday night, Trump statements have been fact-checked by PolitiFact 75 times; none of his statements have been entirely true. But it doesn't matter. Trump supporters “know” that the establishment is out to ban his snake oil because it’s better than what the Rubios, Bushes and Christies of the world are selling. Every narrow, fact-based criticism of Trump reinforces his supporters’ belief that his only sin is to offer them what they want and are owed.

Even if Trump falls off the radar in the New Year for selling a product that has finally become too fantastical and outrageous, his success as the snake oil candidate in 2015 should give everyone pause. Because snake oil salesmen only succeed when their buyers — potential American voters -- are so fed up with the prescribed choices that they are willing to take a risk on someone who talks fast, who talks loud and who flatters their intellects. Even if the snake oil is bad for the country’s health.

Brian Wagner is a partner at the Truman National Security Project and a former congressional staffer. All opinions are his own.