Our new post-Obama "Star Wars": Race, the Force and the dark side in modern America

The diversity in "Star Wars: The Force Awakens" has the potential to be remarkably empowering 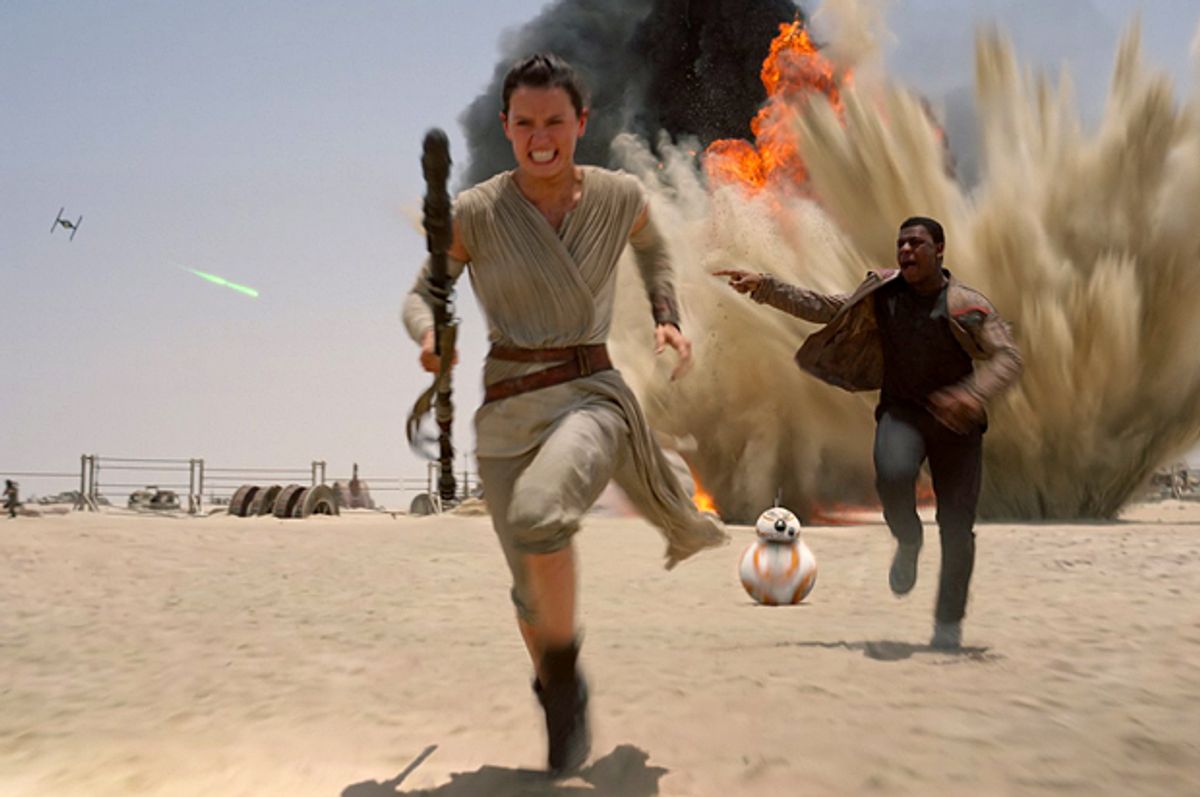 J.J. Abrams’ "Star Wars: The Force Awakens" is a fun and exciting film. Older audiences will be pleased as they remember their childhoods of the 1970s and 1980s. A new generation of fans who only know the more recent prequel films -- and were likely left wondering “Why is 'Star Wars' such a big deal?”— will finally begin to understand why "Star Wars" captivated several generations of viewers around the world.

"Star Wars" is an example of “the monomyth” — a set of story forms and narrative structures that are common across all cultures and which together form a shared human mythology.

As such, J.J. Abrams takes the "Star Wars" formula of a quest — a magical item, family secrets, the coming of age struggle, finding one’s destiny and the battle between good and evil — and continues it in "The Force Awakens." "Star Wars: The Force Awakens" is for the most part a remix of "Star Wars: A New Hope." As an example of the monomyth and the subsequent repeated themes present in all the "Star Wars" films, this is to be expected.

The original "Star Wars" films created a filmic imaginary galaxy that was almost entirely populated by white people. "Star Wars" had a magical energy field called the Force, sentient droids, bizarre aliens, faster than light travel, lightsabers, and moon-sized battle stations that could destroy a planet with one blast of its laser. Yet there were no black or brown people in Lucas’s original 1977 film. What cultural critic and scholar bell hooks and others have described as “oppositional reading” turned the Star Wars universe upside down: If black and brown folks were not actually in the visual and narrative frame (or if there, depicted in a racist and derogatory manner by the White Gaze), they would imagine themselves still present in the movie.

Black audiences would cheer on the “black” character Darth Vader as he killed “white” rebels. And there were no limitations on the racially transgressive act of childhood play where  kids on the ‘res, in black cities such as Chicago, communities like Harlem or in the barrios of Los Angeles would become Luke, Han, Leia or Chewbacca.

George Lucas, to his credit, attempted to correct this oversight. He cast Billy Dee Williams, then one of, if not the, most recognizable African-American Hollywood leading man of the era, in "A New Hope’s" sequel, "The Empire Strikes Back." Williams’ character would be one of the heroes in the (then) final movie Return of the Jedi. Billy Dee Williams would be joined in that movie by token and largely forgettable black characters -- noticed only because of their conspicuousness -- who were mostly cast in the role of random, nameless starfighter pilots and who died in the final climactic battle. Lucas tried to make a more diverse and representative world in his Star Wars prequels. But again, this well-intentioned effort was overshadowed by the Steppin Fetchit, race minstrel-like character known as Jar-Jar Binks, the Charlie Chan Asian caricatures of the Galactic Trade Federation and Watto, an anti-Semitic stereotype embodied by the greedy, craven, slave master who owned a young Anakin Skywalker on the planet Tatooine.

Fortunately, people of color, especially those who are “Millennials” and younger, will not have to read themselves back into "Star Wars: The Force Awakens."

The stars of Abrams’ new Star Wars film are a black Stormtrooper named Finn (John Boyega) and a young white woman named “Rey” (Daisy Ridley). They are joined by a charismatic and heroic starfighter pilot named Poe Dameron, who is played by the Latino actor Oscar Isaac. There are people of color and women in almost every scene of "Star Wars: The Force Awakens." This extends to the antagonists in Abrams’ new film as well. The newest iteration of the Empire — now known as the First Order — also demonstrates much more racial and gender diversity than its predecessor. In Lucas’s original films, the Empire’s soldiers were all white and male. They were modeled after the Nazis. More than just uniforms and regalia, the Empire possessed a racist, xenophobic and sexist political culture.

This is not diversity as racial “tokenism.” The women and people of color who populate Abrams’ "Star Wars" film are present as quotidian fixtures; their existence is not marked by their uniqueness, but rather in how common and mundane humane diversity would be in the fantastical worlds of “a long time ago” and in “a galaxy far, far away.”

The diversity in "Star Wars: The Force Awakens" has the potential to be remarkably empowering for those black and brown folks, and white viewers too, that see this as the new normal. However, we must be cautious. Celebrating the racial and gender diversity of a movie while not simultaneously understanding how Hollywood, and the mass media more generally, reproduces and reinforces sexism and racism, can also be a distraction from substantive political and social change work.

There are of course, white (male) viewers who will be remarkably threatened and angered by how people of color and women are featured in the new Star Wars films. Why? Because for too long, science fiction as a genre, and popular culture more generally, were and remain fantasy play spaces for Whiteness and hegemonic White Masculinity. For that cognitive map, White men were always and naturally to be the center of all things. To disrupt this assumed norm and type of white male privilege in even minor ways is a cause for many of its owners to become panicked and rageful.

Films are a society talking to itself about itself while searching its collective subconscious for meaning. Thus, film is an essential text that reveals a great deal about the socio-political moment of its creation.

George Lucas’s original "Star Wars" trilogy was a response to the worries, depressed economy, malaise, internal strife and sense of American decline in the post-Vietnam years through the early Reagan 1980s. To that end, Lucas created a masterwork intended as a modern day fairy tale that would teach timeless lessons about humanity and justice in the motif of a space opera inspired by the comics and films he loved as a child and young adult.

J.J. Abrams’ "Star Wars: The Force Awakens" is a product of a post-9/11 America that has been at perpetual war for more than a decade, a Great Recession/Depression 2.0 that destroyed the hopes and dreams of a generation of Americans, obsessions about “Islamic Terrorism,” mass shootings that are a public health crisis, a broken and dying Earth, a society where less than half the population are now “middle class,” a reactionary and revanchist Republican Party, police thuggery against black and brown Americans, demagogues like Donald Trump and an increasing sense of hopeless and desperation among a public that is doing worse economically than their parents and grandparents — and whose children and grandchildren will likely continue this slide of downward mobility.

As a whole, the Star Wars universe constitutes a parable that reflects our American (and global) present.

In this moment Americans can choose to turn to the light side of the Force -- a progressive, humane and truly democratic and just world. Alternatively, the American people can surrender to the dark side of the Force -- a state of militarism, violence, human misery, immiseration, xenophobia, racism, prejudice, fear, suspicion, hatred, the neoliberal nightmare and the movement conservative war on the poor, people of color, women and any group its agents identify as weak and vulnerable.

"Star Wars: The Force Awakens" is, of course, not perfect. The friendship between Rey, Finn and Poe Dameron feels very rushed and a bit forced in the opening acts of the movie. John Williams’ music has the aesthetic sensibilities and emotion of his earlier "Star Wars" work, but lacks an iconic moment such as the “Duel of the Fates” from "The Phantom Menace" or the main theme from "A New Hope."

In what is an otherwise very good performance, John Boyega too often defaults to awkward moments of comic relief. This is a common problem with how black characters are depicted in Hollywood films. Likewise, J.J. Abrams, for all of the great racial (and species) diversity in "Star Wars: The Force Awakens," falls back to a tired habit in mainstream American science fiction films where black and brown actors (in this case Maz Kanata, played by Nigerian actress Lupita Nyong’o) are either disguised by prosthetics or transformed into computer generated characters. This is a carryover from classic “golden age” American science fiction where racial erasure was accomplished by turning non-whites into robots and aliens for the purposes of either well-intentioned allegory about the social evils of racism and prejudice or just plain old fashioned, ugly white supremacy.

One of the strongest criticism leveled at George Lucas’s last "Star Wars" movies was that there were many moments where it felt as though he had forgotten what made "A New Hope," "The Empire Strikes Back" and "Return of the Jedi" so magical and awe-inspiring. In "Star Wars: The Force Awakens," J.J. Abrams has not made that mistake. He is a "Star Wars" devotee and it shows in every frame of the film.