"This is why people are panicking here": Björk takes on an "extreme right-wing redneck government" to preserve Iceland's open spaces

Björk on green energy, the climate change tipping point and why "nations have to drop their ego and collaborate" 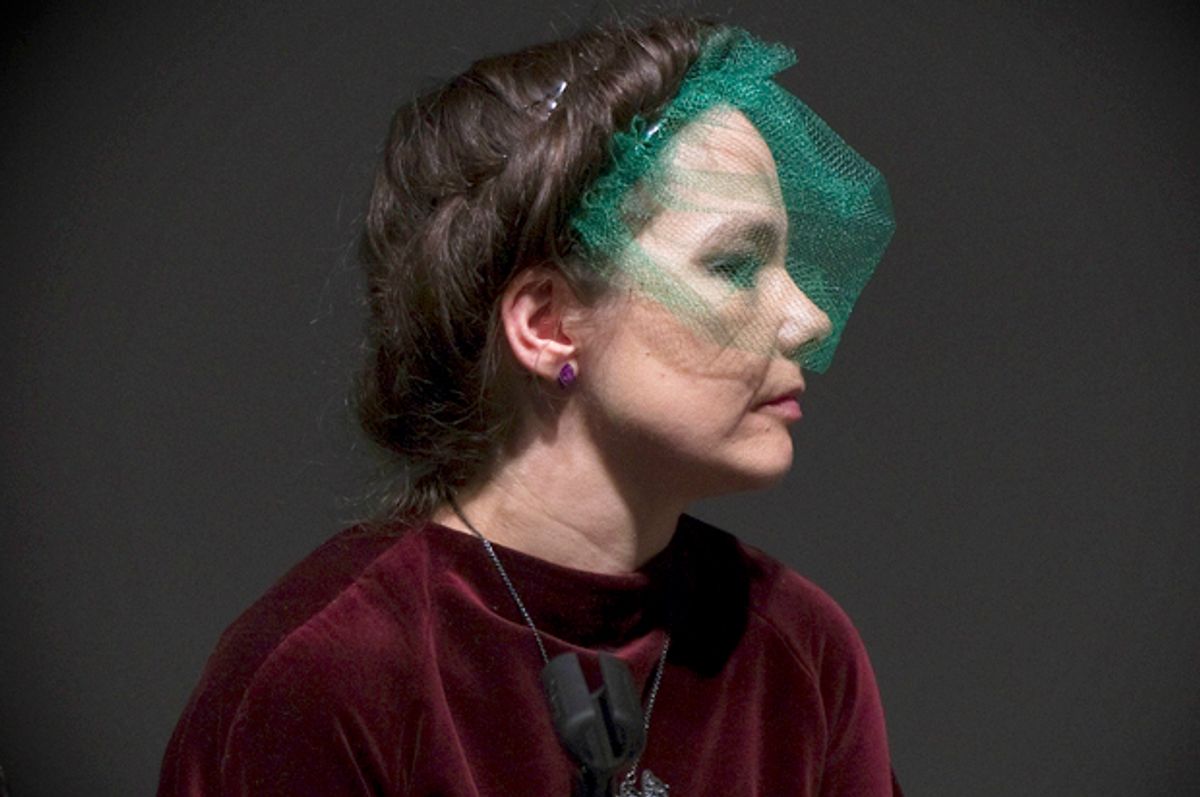 Björk has always been known for her groundbreaking visual art and music, as well as her embrace of technology as a means to facilitate communication and spark innovation. For example, her "Biophilia" project grew into an educational program and series of workshops whose aim is to foment creativity and inspire students to use technology to embrace music, science and nature. However, Björk also has a long track record of environmental activism, in particular where it relates to her home country, Iceland. To raise awareness of (and funds for) these causes, she's historically turned to music — from the release of the Thom Yorke-featuring 2008 song "Náttúra" to a 2014 benefit concert featuring herself, as well as Patti Smith and Of Monsters And Men.

This year, however, she's taken to more direct spoken activism, due to the urgency associated with potential construction that would threaten the livelihood of the Highlands, an idyllic Icelandic region known for its untouched beauty. In a nutshell, proposals exist to build roads and power plants in the Highlands, in addition to placing high-voltage power lines across the area. (Separate — but just as worrisome — are discussions going on between the U.K. and Iceland that would involve constructing an undersea power cable, so the former can harness some of the latter's energy.) The solution is to create a national park within the Highlands, which would protect it from harm.

Björk and her environmental collaborators have launched a Facebook page, "Gætum Garðsins - Protect The Park," to share news and information about activities associated with the Highlands movement, while there's also a petition at heartoficeland.org people can sign in solidarity. As the recent 2015 United Nationals Climate Change Conference drew to a close, Salon spoke with Björk from Iceland, where she shared what cultural and governmental forces led to the Highlands' potential destruction, why she's diving full-force into this activism now and what people can do to help.

It seems like things are at a particularly crucial tipping point now. Where is this urgency coming from?

Well, there's been a group of people, including myself, that have been working on the same topic for more or less the last 15 years. We've done a lot of different campaigns, and [we've] tried to change the angle every few years. To cut a really long story short, Iceland was a colony for 600 years, and we didn't get industrialized. Then we got independence after World War II, and in 70 years, there have been certain rednecks that want to catch [Iceland] up with the westernized nations and do what took them 300 years to do, to industrialize. Do it in the fast-forward, 50 years program.

Fortunately, the majority of Icelanders have been against it. They want to keep Iceland as-is. What we want now, more and more, is to just enjoy the fact that we are the biggest untouched area in Europe right now and to stay that way. And move into [adopting] clean technologies that collaborate in nature, than to industrialize, build dams — the old model, aluminum smelters, heavy industries. You know, like the right-wing rednecks want to do here.

The last two years, we have been more straightforward in saying we want to change the Highlands into a national park. We've tried to find a business model for a national park and to execute it. There was a new government which came to power two and a half years ago. They want to do things really quickly and privatize everything. The Icelandic early spruces were owned by the public, have always been owned by the public. And they want to privatize it and make maximum money out of it for very, very few people in the shortest time possible.

Right now, there's in the system about 50 projects, different ones — like dams or aluminum smelters — [that] in the next 5 to 10 years could be executed if we don't stop them. And the first step of this is the electric cable across the Highlands. Because once that electric's cable there, you need to justify it, and then you need to build more, dam more things to get more electricity. And this whole domino effect kicks off — and before you know it, there are no more Highlands.

What do the Highlands represent to the people of Iceland — and to you personally?

Lots. They mean a lot. Right now, more than 80 percent of Icelanders agree with me, that they should stay untouched. I'm not just voicing my own personal opinion, but I'm more like a spokesperson for the majority of Icelanders — especially since this new government came into place, in the last two and a half years, where there's a very small minority of the rich that want to make money out of this. We feel it's not fair.

Sounds very familiar to what goes on in America, sadly.

It's a long story — I'll try to give you the short version. The pros and cons of Iceland — and which I actually personally think is the best thing about it — is how few people live here. It's only 330,000 people. And Iceland is the size of New York state, so there's a lot of space here. The good thing is that if something happens … like, when I was a teenager and punk arrived to Iceland, literally a third of the nation started a punk band or something. It was ridiculous. It's so simple — there's no infrastructure here, so if something's happening, the whole country takes part in it.

The downside [is] … for example, when the bank crash happened, because there was no infrastructure, the banksters, which we call them [Laughs], literally took over the island. The whole economy of the island collapsed. But then, the good thing is, we managed to take them to court, and we put into jail not only bank people, but also politicians.

What I'm trying to tell you, clumsily, is that it's a small country. It's very extreme. After the bank crash, there was a very extreme, left-wing government that took power. For the first time, they put in practice environmentally protective laws, which we had never had. We never had them like you guys had — you had your national parks, like, 150 years ago or something. We never had that. It literally was just up for grabs. It's been a cross-political thing for decades here, trying to make a national environmental protection law.

And two and a half years ago, a very extreme, right-wing, redneck government came into power, and they basically did one law where they nullified all the environmental protection laws in one day — decades of work. That's when everything to go downhill very quickly. This is why people are panicking here. It's really, truly could be the end of the Highlands if we don't act now.

As I've read, they are such a tourist spot and are so beautiful. It's unbelievable people wouldn't want to protect that. It's so sad.

I kind of, against my will, have learned some strange money lingo [Laughs] because sometimes it's the only thing that actually works. That's what we've been saying — now, Iceland makes more money from tourists than fisheries and [other] industries combined. Tourists come here because of the untouched nature, so basically what the politicians are doing are they are shooting themselves in the foot.

It's strange, this old system, this industrialized, patriarchal system, is really like an old dinosaur that refuses to die. I actually think the only thing that will stop it is when they realize that they will actually make more money by protecting the Highlands and moving to more green, high-tech options and collaborate with nature. I actually think it's just around the corner. But it's really like the last dinosaur roar. [Laughs] I just hope it's not too late. We really need to react now. This is the moment — we need to go into the 21st century and open our eyes and appreciate all the opportunities we have, which are enormous.

All these nations have to drop their ego and collaborate. This fight between the westernized countries pointing their big finger at China and India is kind of ridiculous, after they've done 300 years of the biggest heavy polluting. [Laughs.] I just think everybody needs to drop all that and work together and move as quickly as possible and not be afraid of change. Change is an opportunity. And if we go in harmony with the times, and with the 21st century, with nature, and with all the new green tech that's being invented now, there actually comes a more profitable future — not only on a spiritual level and emotional level but also on a more financial level. It's time to withhold the old model. It's such a struggle, and it's working against everything.

I don't know yet, because I'm just beginning. I think the album that [was] affected [by] it most was [2011's] "Biophilia." In the summer of 2008, I dropped all my work and just worked on environmental issues for five months in Iceland. I was actually [working] with other environmentalists with huge projects, where we were trying to put attention on small seed companies just to show all the other hundreds [of] options, what to do here in Iceland in job creation other than just aluminum smelters or big industries. Little did we know that the middle of this work we were doing, the first time I was working with economists and people like that, the bank crash happened. I found myself in the heat of a very, very peculiar thing.

And to a certain degree, "Biophilia," my project, came out of that — just this energy to be totally a nonprofit thing that you can make everything out of nothing. It's more about the imagination and thinking outside the box and being 21st century rather than making big budgets to do everything and continuing the conveyor belt and repeating what you did before. And also just the whole philosophy in the lyrics and "Biophilia," which took me three years to make, was really inspired and influenced by this.

But I think it's too early to say with my next project — I'll have to see. I will continue to be active — I have been [for the] last 15 years, and I will definitely continue to be so. The good thing about music is, it's just its own creature, and it goes wherever it wants to. You can't really control it — you just write a bunch of songs, and you sit down and you listen to them and go, "Oh! Okay. This is what you are." We'll see.

For people who aren't in Iceland, what can they do to help?

We have a Facebook page, where people can go and there's a petition we are running. If you like [the Facebook page], we are going to [in the] next weeks continue to announce more ways to support our cause. You know, ironically, the people in power here, they have managed to ignore their countrymen somehow and hide behind the bureaucracy and the wars of Parliament. But somehow, they seem to listen to the international voices, like for example every time Obama has supported green courses, it has had a big domino effect here in Iceland. That's why I've been doing these international interviews — because it seemed to put pressure on the local politicians, sometimes more than if we just talk here in the local media.