If the "C-Word" fits, let's embrace it: Women don't need to be sheltered from this one powerful insult

On the occasion of Tina Fey revealing who inspired that episode of "30 Rock," a case for employing this vulgarity 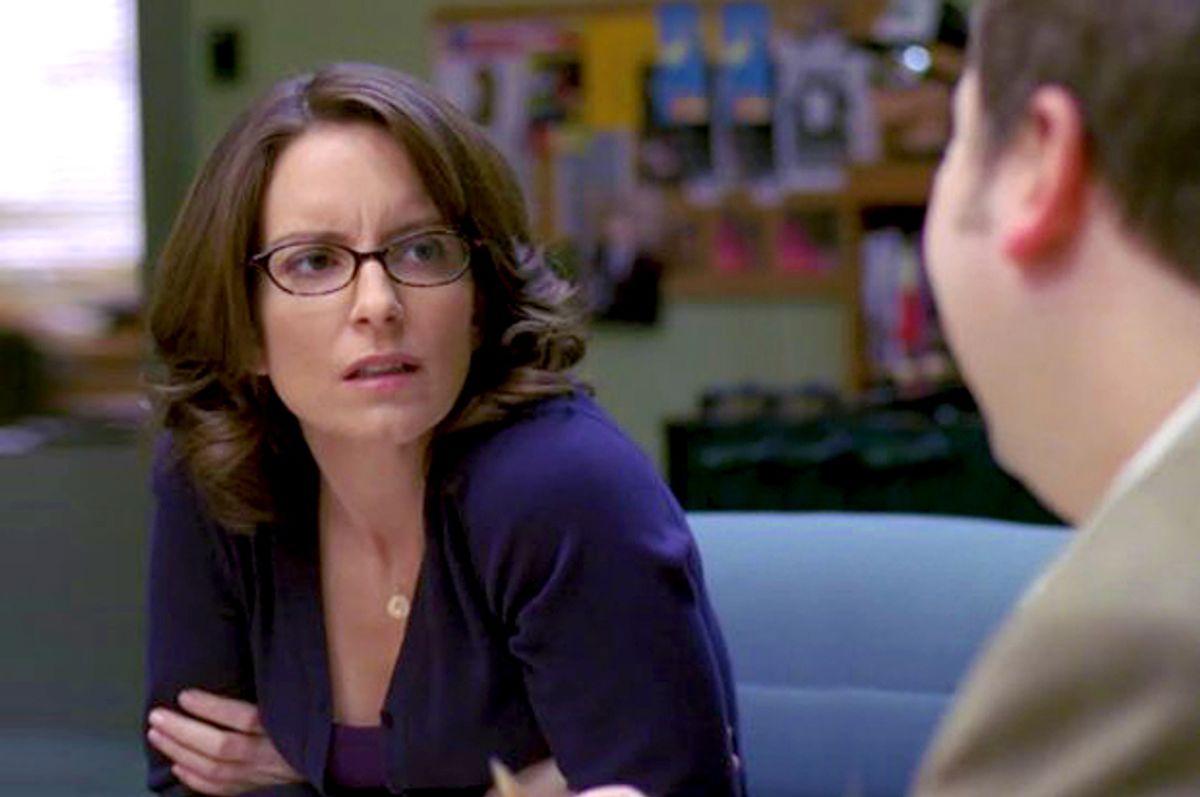 During an appearance on Howard Stern's radio show earlier this week, Tina Fey was asked about an incident that allegedly inspired a "30 Rock" episode titled “The C Word.”

“Did you confront a staffer at 'Saturday Night Live' after somebody...they called you a 'cunt', is that correct? That's the worst thing you can call a woman, I think,” Stern posited.

“Yeah, which is by the way what I called a lady in London the other night,” Fey admitted, before revealing that it was Colin Quinn who called her the name, and whom she has since forgiven.

Stern's statement, however, does raise the question of whether “cunt” is, in fact, the worst insult one can levy at a woman. Is it a misogynistic term, or just a harsh one? What word, if any, could be worse?

In a chapter of his book “When Truth Gives Out” titled "Epithets and Attitudes," philosopher Mark Richard explores the concept of slurs. Richard offers a working definition of a slur as a word that possesses a neutral counterpart, but whose use signals a value judgment on the part of the user. “A slur directed towards African Americans means,” he writes, “to a first, rough approximation, something like black and despicable because of it.” The notion of slur-dom is a separate one from vulgarity. On “asshole,” Richard writes:

It would be an interesting exercise, no doubt, to try to spell out the meaning(s) of this word without using invective…Both ‘asshole’ and slurs are devices used to display contempt for people in virtue of their possessing certain properties. The difference between the terms is that there is nothing intrinsically misrepresenting about the reaction voiced by ‘asshole’: the way assholes behave merits contempt. To represent an asshole as an asshole is to represent things as they are.

A slur, by contrast, is a misrepresentation in that it editorializes incorrectly, attaching value judgments to qualities that are inherently neutral — race, gender or sexuality.

“Slut” is such a word. Women, of course, ought to be free to make decisions about their sex lives that are the healthiest and most comfortable for them without fear of being stigmatized. “Slut” implies that choices that ought to be driven by personal preference and personal preference alone are somehow indicative of a woman's intelligence, confidence or self-worth. Women who don’t adhere to arbitrary and often extreme standards of sexual behavior are also fully capable of being confident, intelligent and deeply moral. The suggestion otherwise is demeaning to all women, even those who choose to abide by such standards.

The difference between “slut” and a mere vulgarity like “cunt” — a term that is gendered, to be sure, but whose very definition most certainly merits contempt — is that the former attempts to degrade a whole segment of the population, while the latter only attempts to degrade a particular individual. Only the former is necessarily sexist, and only the former is a slur. Slurs are, of course, inherently false. They are lies. Men and women who use the term “slut” as a weapon reveal, it turns out, very little about their targets, and a great deal about themselves.

In February of 2012, a Georgetown Law student named Sandra Fluke testified to Congress regarding Conscience Clause exceptions to the Patient Protection and Affordable Care Act. Her testimony focused entirely on the experiences of friends and acquaintances, most of whom utilized birth control for non-contraceptive purposes. Still, it inspired shock jock Rush Limbaugh to dedicate a segment to Fluke, calling her both a “slut” and a “prostitute.” Blatant contradiction of the two insults aside, the segment provoked national ire, even eliciting a reassuring phone call from President Obama. Strident opponent of slut-shaming Joe Scarborough — literally shaking with anger, he was, at the disgusting attempts of “women’s rights ladies” to label Monica Lewinsky a slut — remained unmoved.

Scarborough repeated the claim ad nauseam even after guest Mark Halperin countered that Obama refused a sizable PAC donation from Maher after the incident.

Scarborough seemed pretty self-satisfied after pointing out the imagined hypocrisy, but I actually find the difference between the events quite significant. Limbaugh was employing slurs in their quintessential fashion — implying that having an opinion on a particular issue reveals something about a woman’s personal sexual history, further implying that something is enough to discredit that opinion, and thus attempting to shame an entire class of people out of participation in political discourse.

Maher, on the other hand, was leveling a critique, however crudely formed, at an already active and influential contributor to that discourse, branding her a “cunt” not solely because she is a woman, but because he found her contributions wanting at best. (Also, because she happens to be a woman.) Crying misogyny is, to a certain extent, a cop-out, an excuse not to have to answer for one’s cuntiness. Which allows one to contribute to the discourse, certainly, but prevents someone like Palin from being a full participant in it.

Maher most definitely has a spotty record when it comes to dealings with women, evidenced in a segment featuring Meghan McCain and CNN correspondent Paul Begala. When McCain, characteristically unaware of how little she has to say, excuses her historical ignorance by touting her youth, the quippy Begala snaps back, “I wasn’t born during the French Revolution but I know about it.” Maher’s infantilizing response — “He’s a mean man! I’ll protect you!” — reveals his clear unwillingness to let a woman participate fully in impassioned debate, a trademark of which is the witty and insulting retort. Maher is misguided by the very same patriarchal protective urges that make us bristle at sex-specific obscenities to begin with. But this is a problem of condescension, not aggression, and perhaps one that would be solved with more “cunts," not fewer.

In “The C-Word,” Liz Lemon attempts to have an employee fired after she overhears him calling her a cunt. “I’m not upset by cursing! I mean, I love cursing. I love it. But this word is not acceptable,” she says. “You know, because there’s nothing you can call a guy back. There is no male equivalent to that word.”

Yes and no. In purely definitional terms, the word “dickish” is remarkably close to describing acts one would term “cunty.” The comparison is especially illustrative because both have two definitions. One is neutral and, like “asshole,” refers to a specific body part. For this reason, when we invoke their second, decidedly non-neutral definitions, the terms retain their gendered associations. However, their non-neutral definitions are both inherently negative — both words are used to describe behavior that is simultaneously mean-spirited and frustratingly passive-aggressive.

But, in connotation, Lemon is quite right. No word, when applied to men, packs the same punch as “cunt” or has the same capacity to offend and shock. To offend and shock, it should be noted, is precisely the purpose of vulgarities. That it packs a punch is why we love cursing; that is its contribution to language.

In the past, some have proposed reappropriating “cunt” as a way of dulling its effect. Reappropriation is, in fact, one of the few cases cited by Richard wherein a slur does not cause harm. “It is an insult to no one,” he writes, “save perhaps the homophobe, for gay people to call themselves queer.”

But the idea is not quite applicable here, for “cunt” is not a slur. Where “queer” and “slut” have neutral counterparts, “cunt” more closely mirrors “asshole” in that it describes explicitly contemptible behavior. An astute observer will note that women frequently get called “cunt” for behavior that, in men, is more associated with words like “confident” and “self-assured,” not “dick.” But this merely illustrates what should be the very obvious principle that it is quite possible to be sexist without employing explicitly sexist terms. A speaker who calls a woman “cunt” simply for exhibiting assertiveness is essentially misusing the term. Blaming “cunt” for its user’s misogyny is just shooting the messenger.

In fact, both “cunt” and “dick” are very specific examples of a bizarre linguistic tendency to use gendered terminology where non-gendered words would most certainly do. The reason that the latter causes less pearl-clutching doesn't have to do with a lack of vocabulary so much as an association between femininity and defenselessness. A corollary to the notion that women ought not be vulgar and aggressive — or do so at the risk of being labeled a “cunt” to begin with — is the belief that vulgar aggression directed at women is inherently misogynistic.

It is no coincidence that the one word that clings to this shock value even among the jaded is one that is applied to the sex traditionally perceived as weak, and even less of a coincidence that there is no equivalent for the sex traditionally perceived as stronger. The raw and visceral reaction we have toward gender-specific terms that happen to be vulgar reveals just how pervasive this perception is. The problem is compounded when we shield women from aggressive language, as though we were delicate little flowers. And much as I appreciate that it is offered with the best of intentions — much like a door held open or a dinner paid for — I’m not in need of the protection.

Note: Portions of this piece are adapted from a previously published essay that is no longer available online.