Justice denied: Rachel Corrie died protesting the demolition of Palestinian homes by Israeli forces. Her parents carry on the fight

The Corries won't give up, continuing to draw attention to the occupation, and the barbaric practice of demolition 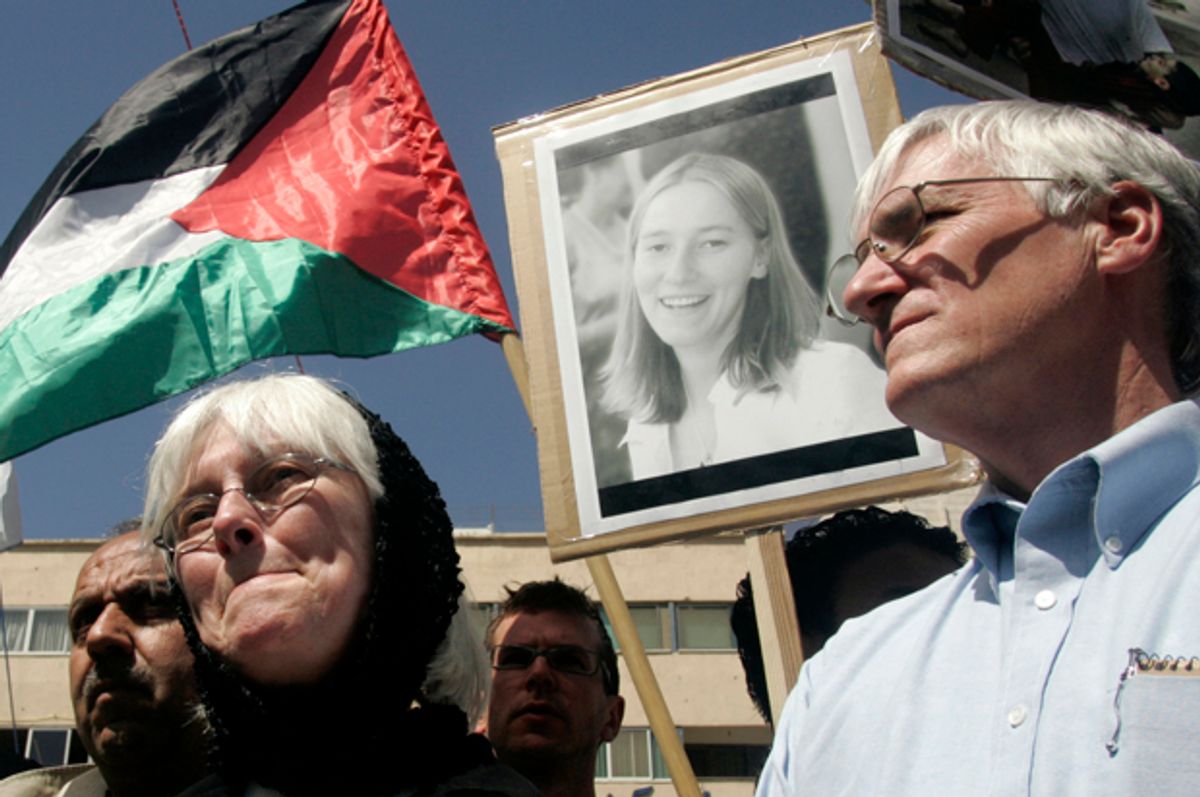 In 2003, a 23-year-old American from Olympia, Washington, was crushed to death by a bulldozer operated by two members of the Israeli Defense Forces. Rachel Corrie was in Gaza to work with an international human rights organization; at the time of her death she was involved in a nonviolent act of civil disobedience, placing her body in front of a Palestinian home to stop its demolition by the Israeli state. Despite the fact that the demonstration was well-known, and that people warned the soldiers of Corrie’s presence, shouting and waving at the bulldozer as it approached Corrie, the soldiers claimed they could not see her.

In 2012, a district court in Israel decided that Israel was not responsible for Corrie’s death. This finding drew immediate criticism, not only from both international and Israeli human rights groups, such as Amnesty International, Human Rights Watch, B’Tselem and Yesh Din, but also from the U.S. ambassador to Israel, Dan Shapiro, who claimed that the investigation “was not satisfactory, and wasn’t as thorough, credible or transparent as it should have been.” Former President Jimmy Carter also declared, “The killing of an American peace activist is unacceptable. The court's decision confirms a climate of impunity, which facilitates Israeli human rights violations against Palestinian civilians in the Occupied Territory."

This year the final appeal by her family was rejected by an Israeli judge. Why? The Israeli court has ruled for a “military exemption” and that Rachel Corrie was responsible for her own death.

Hussein Abu Hussein, one of the Palestinian attorneys working on the case, is dubious about the court’s reasoning: “The Israeli judge came to the conclusion that the state is not responsible for harms which take place during a time of war, and he declared Rachel was in a war zone. But what kind of war are we talking about? There had been no declaration of war; there was no armed conflict at the scene. The Israeli soldiers were sitting on the bulldozer, they were not even allowed to get down off the bulldozer. How is that a war? Rachel came to Gaza legally, with an Israeli visa, to do international human rights work, to save Palestinian homes from illegal demolition. The Corries are seeking both justice and accountability.”

The obstacles placed between the Corrie family and “justice and accountability” are so formidable that the U.S. attorney for western Washington, John McKay, a Republican appointee, told the Corries that the chances of the State Department helping them were nil.

He explained that there is a narrow window in U.S. law for investigating and prosecuting an international case such as this –18 U.S.C. 2332 – and all “elements” of the applicable statutes must be present for an investigation. He said there would never be a U.S. investigation in Rachel’s case, because of element 2332D. This calls for the attorney general of the United States to certify that in his judgment the act was intended to “coerce, intimidate, or retaliate against a government or a civilian population.” McKay told the Corries that no U.S. attorney general, past, present or future, would ever provide this certification against the government of Israel.

Contrast this with the case of British citizen James Miller, an Emmy Award-winning filmmaker killed by Israeli forces in Rafah two months after Corrie's death. His family ultimately received more than $2 million in damages from the Israeli government. This very different outcome might have had something to do with the fact that the U.K. government had threatened to seek the extradition of the Israeli soldiers in question. This vast difference points out the extent to which the U.S. continues to grant immunity to Israel, and also why we in the U.S. should care.

Despite the denial of their appeal, the Corries continue to travel the world telling Rachel’s story, and, crucially, drawing attention to not only the continuation of the occupation, but also to its intensification, the extension of a colonial project of evictions, demolitions and settlement building. Again, despite the fact the U.S. State Department continues to condemn these actions, the U.S. government continues to pour tax dollars into Israel, $3.1 billion a year, that help pay for these illegal acts. Even some supporters of Israel in Congress are becoming alarmed.  Since 1962 the U.S. has awarded Israel more than $100 billion in aid, far more than any other country in the world. And it’s not only direct subsidies of the occupation that are involved. Recently Ha’aretz reported that “Private U.S. donors are massively funding Israeli settlements by using a network of tax-exempt nonprofits, which funneled more than $220 million (about 850 million shekels) to Jewish communities in the West Bank in 2009-2013 alone.” Again, it bears repeating that these settlements are illegal under international law and have been condemned by the United States.

This “war,” as Israel has now determined it to be, consisting of displacement, destruction and illegal settlement building, includes vast collective actions.

According to a study conducted by the PLO Negotiations Affairs Department, “since 1967, Israel has demolished more than 30,000 Palestinian homes in occupied Palestine, including over 3,000 in Occupied East Jerusalem alone. Since 13 September 2015, 31 Palestinian homes have been demolished by Israeli occupying forces mainly under the pretense of ‘punitive measures’ but also due to ‘lack of permits’ from the occupation authorities.”

These demolition projects include specifically targeted populations, as in the displacement of Bedouin communities. The news magazine 972 tells of the demolition of the village of Umm el-Hiran: “The Negev village of Umm el-Hiran is perhaps the most blatant example of how the state hopes to displace Bedouin citizens for the benefit of Jewish citizens. The Israeli Supreme Court recently upheld plans to demolish Umm el-Hiran and build a Jewish town, named Hiran, in its place. Umm el-Hiran’s Bedouin residents would be forcibly relocated to the nearby township of Hura, according to the state’s plans.”

The war also takes place in very particular and personal ways. In an urgent case that is unfolding now and gaining international attention, Nora Ghiath-Sub Laban speaks of being evicted from the house in occupied East Jerusalem that her family has owned for 60 years:

Israeli occupation authorities have been trying to displace my family since the 1970s. Throughout the years I have seen many of my friends and neighbours forcefully displaced by Israel’s unlawful evictions and house demolitions. I have fought non-stop for the past 40 years just to live in peace in the house where I was born and grew up. This house is not just walls for my family and me. Every corner and every old wall and tile have memories for us.

Evicting us will not only make us homeless, it will be like enforcing a capital punishment on my family and me. It will deprive us of our fundamental rights and dignity as human beings. Our lives will never be the same.

Recently I sat down with the Corries and their attorney, and asked them specifically what message they wanted to send Americans.  Each of them underscored the need for Americans to act in solidarity, given both the U.S. government’s reluctance to take meaningful action and the fact that we, the American taxpayers, continue to finance these illegal and often deadly acts.

Hussein Abu Hussein: Speaking now as an individual, and not as a representative of an NGO, I can say that the BDS movement is a way to make Israel obey international law and to respect the rights of the Palestinians.  The Vietnam War would not have ended without a grass-roots movement that worked from the bottom up against the war; the apartheid regime of South Africa collapsed as a result of pressure from the international community. Americans need to speak out. It is their right—your tax dollars, to the tune of $3.1 billion a year—are paying for the Occupation, all its equipment, including the bulldozer that crushed Rachel Corrie to death.  It’s your right to ask why.

Cindy Corrie: For 12 years we have been sustained and lifted up by people internationally and in Israel-Palestine. We spent altogether 10 months there, five trips to Gaza and several to the West Bank. The human rights groups there were strongly supportive, and that wasn’t easy at all for them to do. They managed to get one representative to be able to witness the trial. Jewish Israelis--“Combatants for Peace” and others--came and sat next to us. The trial was entirely in Hebrew, so everything had to be translated to all of our family members and others who came to court. Our friends and supporters worked tirelessly to get people there to witness what was happening. There were even Jewish Israelis and Palestinian Israelis who could not get in but just stood outside all day to signal to us that they supported us.

We have seen the play about Rachel, “My Name Is Rachel,” performed in Arabic in Nazareth and Haifa, and also in Hebrew in Jerusalem and Tel Aviv, directed by courageous Israeli directors. They performed that play in solidarity with our family. Not only in these places, and in the likely places in the U.S. like San Francisco, but also in places like Mobile, Alabama, we have found audiences and supporters who reach out to us, and having this sense of support from a truly global community has been tremendous.

Craig Corrie: Over the past 12 years this journey of ours has been transformative. When we talk about this as being a matter of rights for the Palestinians, of course that is true, but there is more. To stay at that level, it’s like saying you are for oxygen in this room for blue-eyed people. If it doesn’t exist for blue-eyed people, though, it doesn’t exist for me. We need to see ourselves as tied together for justice. You have to carry that sense of urgency into the U.S. One of the basic roles of any government is to protect its people. When it can’t do that, and when it can’t get justice for its people when they are harmed elsewhere, that’s a real failing. What you have in Rachel’s case is the occupation coming home to the United States. My life has been one of tremendous privilege, and that’s the case for a lot of Americans. What’s the use of privilege if you can’t use it to extend basic rights to everyone? That’s what the Palestinians are fighting for.

This August the same John McKay who advised the Corries wrote a searing Op-Ed in the Seattle Times that makes the same points as Hussein and the Corries. Witnessing the Israeli attack on Gaza that took place in the summer of 2014, McKay states:

People, not governments, may hold the key to change: boycotting Israeli products, ending investments in Israeli businesses and supporting economic sanctions until Israeli policy changes. The boycott, divestment and sanctions (BDS) movement may be the only way that Israel and the U.S. Congress will face the truth: Israeli mistreatment of Palestinians is presumptively about the continuing seizure of Palestinian lands and not about Israel’s security.

For more on the Corries and their fight for justice, visit the website for the Rachel Corrie Foundation for Peace and Justice.