No longer pretending to be objective, NYT turns 3rd debate into "The Hillary Clinton Show" 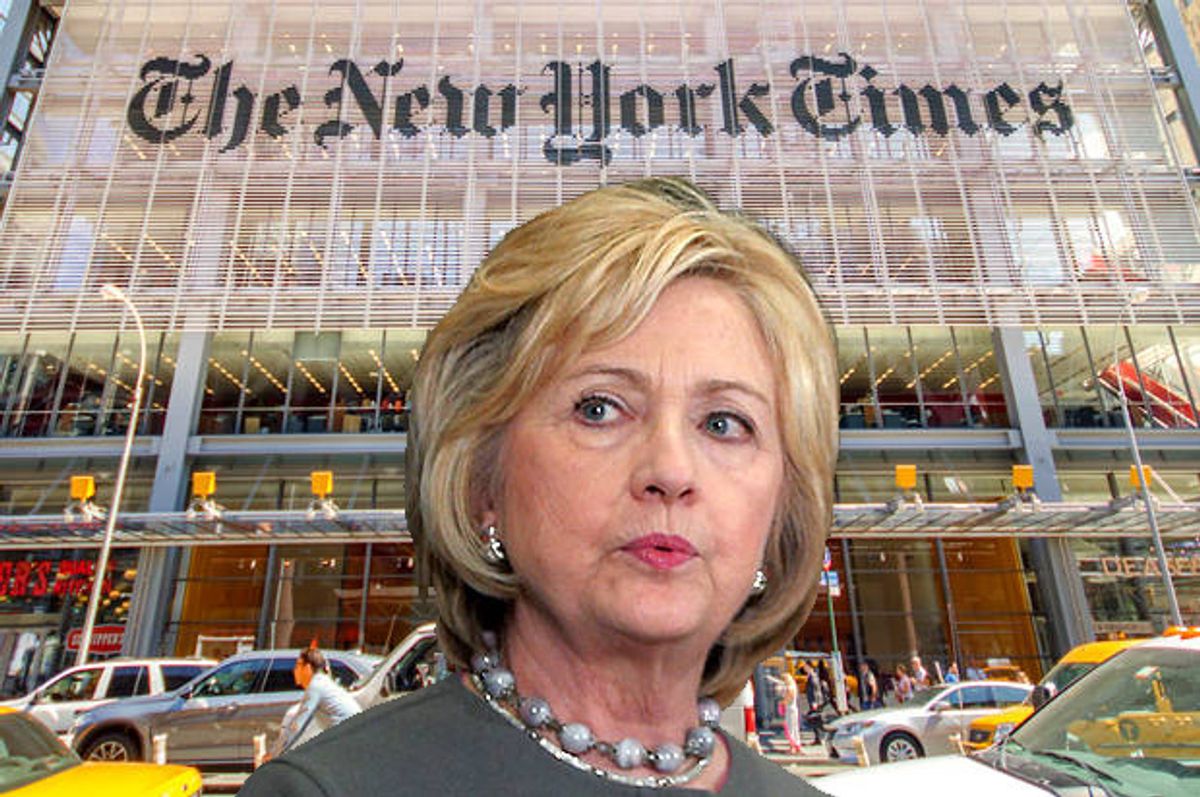 Corporate media outlets often pretend to be "objective" and "neutral." People who work in the media nevertheless understand that this is an impossible task -- and that publications that present themselves as such do so only as a cynical marketing tactic to attract larger audiences (after all, Fox News' slogan is "Fair and Balanced").

Sometimes, however, media outlets throw the charade out the window altogether and expose whose side they are really on.

The New York Times did just this today, in its coverage of the third Democratic presidential debate, which was held last night in New Hampshire.

The first article on the front page of the Times this morning reads "Clinton's Focus In 3rd Debate Is G.O.P. Field." This is the headline for the newspaper's coverage of the debate. It does not have a separate article about Bernie Sanders' role in the debate, yet alone about fellow candidate Martin O'Malley.

"The NYT writes up the debate as the Hillary Clinton show," wrote journalist and the Nation contributing editor Doug Henwood, author of the hard-hitting new book "My Turn: Hillary Clinton Targets the Presidency."

The online version of the article is titled "In Democratic Debate, Hillary Clinton's Focus Is on G.O.P."

The other above-fold stories on the front page are about Puerto Rico, ISIS, and Cuba. Below is a story about Republican presidential candidate Donald Trump and an obituary.

This is the only front-page coverage about the crucial final Democratic debate in 2015, which comes just weeks before the primaries in Iowa and New Hampshire, where Sanders has been challenging and even leading Clinton in the polls.

Journalists and progressive public figures already criticized the Democratic National Committee (DNC) for holding the debate at one of the worst possible times -- the Saturday night before Christmas. They also condemned ABC for unexpectedly pushing back the debate half an hour despite previously advertising to the contrary.

According to the Times, the whole night revolved around Clinton, even in a state where Sanders is threatening her legitimacy.

"Hillary Clinton largely looked past her Democratic rivals in Saturday night's debate, instead repeatedly assailing the Republican field, led by Donald J. Trump," the Times began its article, effectively writing off Sanders and O'Malley as if they were insignificant.

"As in the first two debates, Mrs. Clinton was the focal point throughout," the Times boldly opined, decidedly non-objectively insisting she "emerg[ed] from another debate unscathed."

Amy Chozick, one of the co-authors of the piece, almost exclusively covers Clinton for the Times, often in a positive light. Jonathan Martin, the other co-author, devotes most of his time to covering the Republican presidential campaign.

Virtually every time Sanders is mentioned in the 2,000-word article about the debate, he is discussed in terms of Clinton, not on his own terms.

When Sanders dared to disagree with Clinton, the Times reduced his arguments to "anger"-inducing "assaults" and "attacks." Clinton "came under assault from Mr. Sanders," the establishment newspaper wrote, adding "Mr. Sanders and Mr. O'Malley both did their best to anger Mrs. Clinton," and "Mrs. Clinton scarcely wanted to engage her rivals, except when sharply attacked."

O'Malley was later written off as a mere "irritant."

The Times loves Clinton so much it fails to even fact-check her, instead preferring to uncritically echo her talking points. The newspaper quotes Clinton snapping back at Sanders, stating "I think it’s fair to say Assad has killed, by last count, about 250,000 Syrians." What the newspaper fails to mention is that this is wrong; 250,000 is the total number of Syrians who have died in the civil war that is approaching its fifth year. The Syrian regime is not responsible for all 250,000 deaths. But pointing out Clinton's mistakes would detract from "The Hillary Clinton Show," so it is clearly off the table.

(This was not the only Middle East-related error in the story. Even more egregious was the Times misquoting Sanders saying "Tell Yemen, go to war against ISIS." In reality, Sanders stated "Tell Saudi Arabia that, instead of going to war in Yemen, they, one of the wealthiest countries on Earth, are going to have to go to war against ISIS." The former erroneous statement frankly makes no sense, and indicates a demonstrable ignorance about basic foreign affairs.)

When Sanders noted, in a crucial detail that has been ignored by the media, that the Clinton campaign may have also spied on his campaign's DNC voter data, and not just vice-versa, the Times glibly reduced the point to an "unsubstantiated suggestion of impropriety by Mrs. Clinton's campaign," refusing to even entertain the notion.

The Times concludes its article depicting Clinton in a shining light, writing "'Thank you, good night, and may the force be with you,' she said, beaming." What the newspaper conveniently forgot to mention, while referencing what effectively amounted to Clinton's public advertisement for "Star Wars," was that the film's director J.J. Abrams and his wife gave $1 million to Clinton's super PAC. Blatant conflicts of interest are apparently not deemed newsworthy to the publication that purports to convey "All the News That's Fit to Print."

The leading U.S. newspaper has clearly chosen a side: the side of Wall Street's candidate, the side of power. It doesn't even pretend to be "objective" or "neutral" anymore.