Anti-choicers claim to oppose the Planned Parenthood massacre, but return to the dishonest methods that inspired it 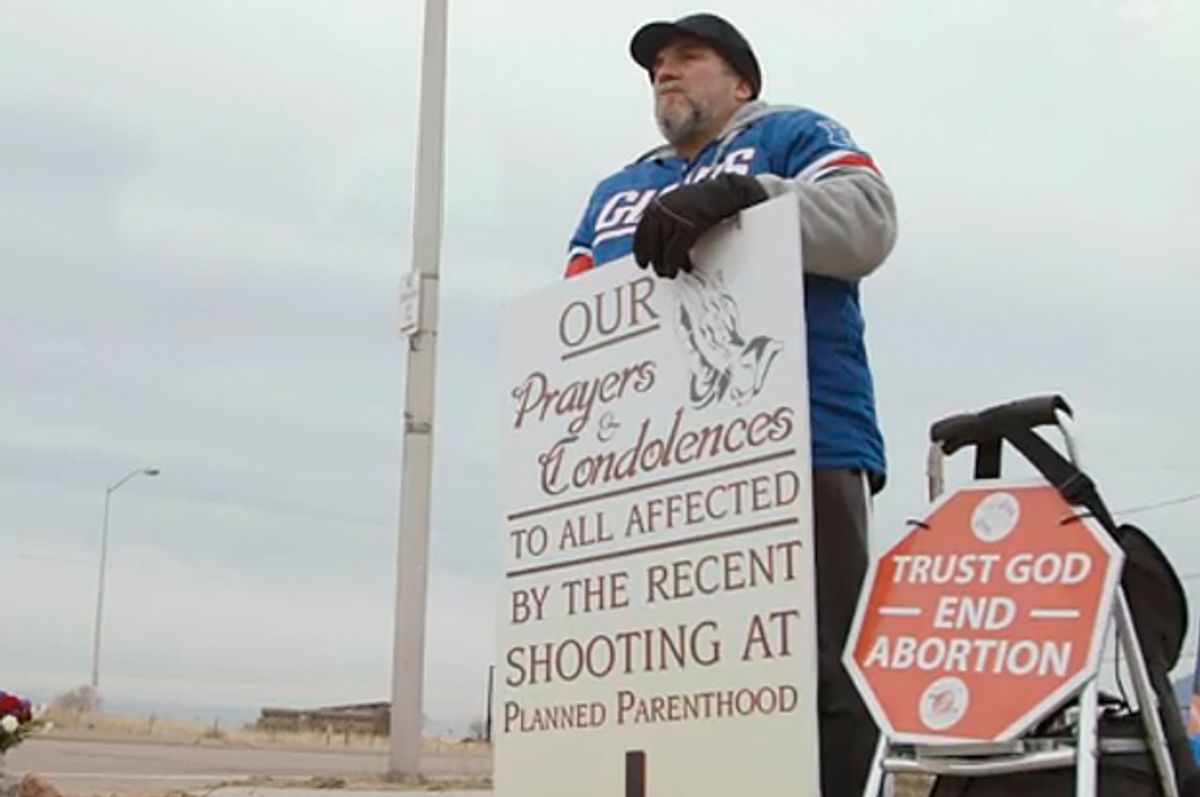 Last week, the U.S. got to experience two presidential debates, both a Republican and Democratic one, that were heavily focused on this issue of terrorism and the prevention of it. And yet, despite the many tedious hours of debating, somehow the moderators in both cases never saw fit to say a single word about the alarming act of domestic terrorism that happened the a few days before the San Bernardino shooting, when an anti-choice extremist named Robert Dear allegedly shot up a Planned Parenthood, killing three people. If it wasn't for Hillary Clinton wedging in mentions of the massacre during the debate, it would have never come up at all.

This habit of ignoring the extremism of the anti-choice movement is doubly unfortunate when you consider how the movement has been reacting to a shooting where the suspect admits that he was inspired by their hyperbolic rhetoric and lies. There has not been any quiet reflection about their responsibility for motivating such a heinous act, or a questioning of whether or not it's moral to constantly lie about your opponents in an effort to demonize them. Nope, the anti-choice movement didn't pause for a moment before returning to the same ugly tactics. If anything, they've only deepened their resolve to lie and cheat and demonize their enemies in a bid to make childbirth compulsory for women.

As Molly Redden of the Guardian reported on Friday, even though the Planned Parenthood in Colorado Springs that was attacked is still closed, the protesters have shamelessly returned. "Something tells me to go out there right away,” Joseph Martone, who is a regular harasser at the clinic, told Redden.

While he offered the obligatory "prayers and condolences to all affected by the recent shooting at Planned Parenthood," Martone's unrehearsed opinion about the shooting was far more interesting. "No one deserves to go through what they have gone through, even though they put themselves in harm’s way.”

"What he did," Martone said of Dear, "was more than a few steps beyond what I would do.” Martone himself has been arrested a number of times for following women onto the clinic's property, apparently too in love with screaming at women to remember that he's not allowed to trespass. And that's the problem. Once you sign off on the idea that targeting individual women, following them, and harassing them is OK, then it's no surprise at all that someone else will decide, since that's not working, that physical force is the next logical step.

But rather than take responsibility for how bad things are, some prominent anti-choicers are casting around for some reason to blame liberals for Dear's behavior.

Frank Pavone, the odious leader of Priests for Life who celebrates the joys of priestly celibacy by yelling at women going into reproductive health clinics, blamed "pro-aborts" for the shooting. "Which side is saying that, that sometimes it’s OK to choose to end a life to solve a problem?" he whined on the Ave Maria Radio network last week, equating removing an embryo from your own body to shooting an actual person in the head because they won't let you make their decisions for them.

Stuart Shepard, of CitizenLink, a political offshoot of Focus on the Family (which is based in Colorado Springs, where the shooting took place), found a novel way to pin the attack on liberals: Blame marijuana legalization. "If you trace his path backwards from where he ended up at Planned Parenthood to that grocery store where the first person was shot and go back another half mile, you know what they sell there?” he said during an interview on a Christian radio show. “It’s a couple of marijuana shops.”

"It’s the kind of thing that happens when you make marijuana legal in a state," he continued. He then argued that the reason you don't hear more about potheads getting stoned and shooting a place up is because the"mainstream news media" covers it up, "because it doesn’t fit the narrative".

Of course, this cute little theory doesn't explain why Dear was still ranting, two weeks later, about how he's "a warrior for the babies" in court. Even if he is a stoner, for which there is no evidence, one has to assume he's not being allowed to consume marijuana while sitting in jail.

But hey, like Shepard, Dear is a big believer that there's some huge cover-up being conducted by the liberal media. "You'll never know what I saw in that clinic," Dear ranted in court. "The atrocities." He was not, apparently, referring to the dead and injured people whose bodies he littered around the place, but to a perfectly legal medical procedure that I suspect very strongly he was too busy shooting the place up to witness.

Dear's attack was the most violent, but it's far from the only attack inspired by the hoax videos falsely accusing Planned Parenthood of selling "baby parts." As Mother Jones reported after the shooting, there's been a rising tide of vandalism and harassment in the wake of the videos:

In the four months following the release of the videos, there have been at least four suspected arsons that targeted abortion clinics, compared with just one in all of 2014 and none in 2013. There have been at least five cases of vandalism since August. In comparison, there were 12 total cases of clinic vandalism in all of 2014 and just five cases in 2013, according to federation figures.

Despite this rising tide of violence, anti-choice activists are eager to engage in more sleazy tactics to demonize women's health care providers. Mark Crutcher, the head of Life Dynamics, has announced that he's starting a project to "“unleash a whole army of David Daleidens," i.e. people who will lure unsuspecting medical workers into talking on hidden cameras, and then editing the videos to make it seem like they said stuff they didn't actually say.

Young conservatives that Crutcher intends to recruit should be cautious about following in Daleiden's footsteps, however. Daleiden is now caught up in a major court battle — and might even be looking at jail time — with the National Abortion Federation. At question is whether he broke the law obtaining the footage he used for his hoax videos, and he's stonewalling a court order to turn over documents about his group's internal workings. He tried to plead the fifth, but the court wasn't having it and he may end up being arrested for contempt if he stays on this path.

But such is the level of obsession that anti-choicers have with trying to turn back the tide both on women's autonomy and the sexual revolution. Lying, fraud, risking imprisonment, inspiring terrorism: Apparently no low is too far to sink when it comes to trying to force women who don't want babies to have them anyway.