Ignoring "gadget guilt" isn't so simple: Here's why we should stay worried about kids and tech

It would be easier to just kick back about digital devices, but we still don't know what they do to kids 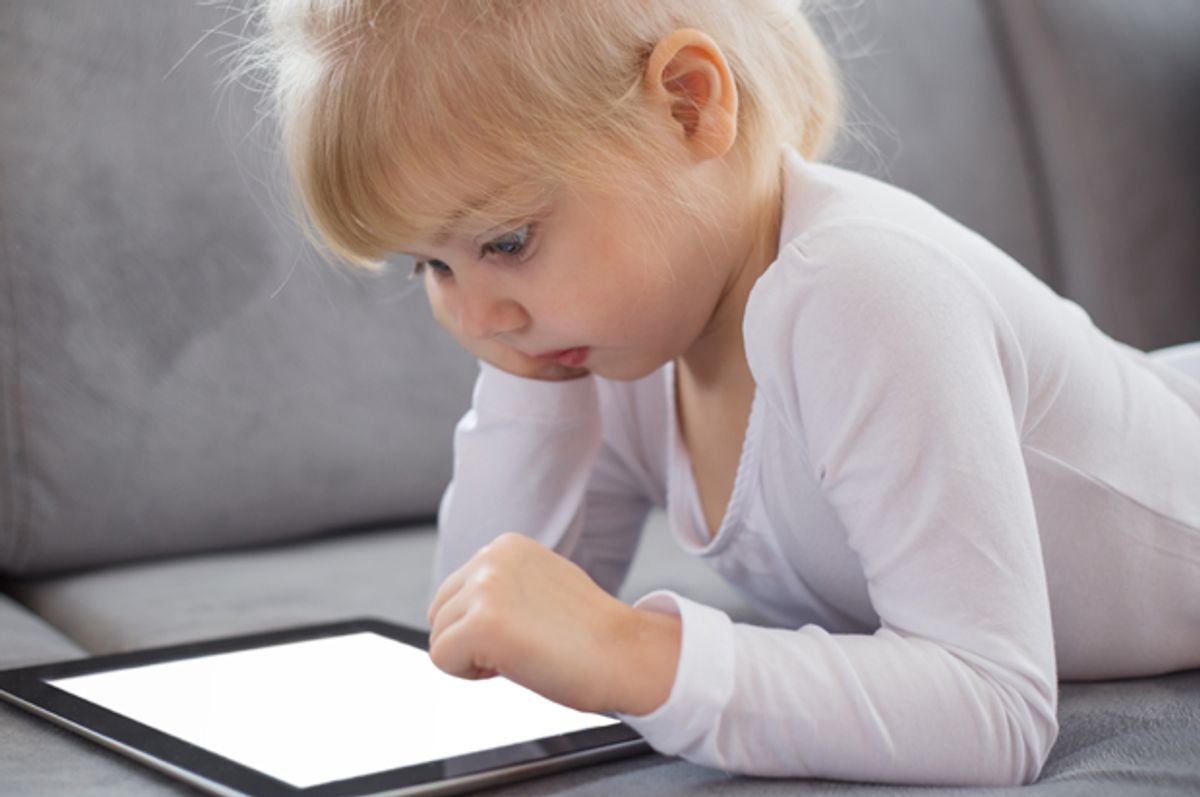 It’s a debate we’ll probably never settle: How much, and what kind of, technology do we want our children to use? With parents, friends and relatives buying Christmas gifts, and the enforced downtime that comes with school vacations and family togetherness, many kids will be on cellphones and tablets and everything else for eyeball-crossing stretches of time over the next few weeks.

Wouldn’t it be easy to just forget about the issue, and settle into the eggnog and holiday cheer? To let the kids collect the digital loot and sink down into the digital cocoon as long as they want?

A new piece that just went up on Slate will surely lead some readers to think something like that. The article itself is smart and informed, but its headline – “Down With Gadget Guilt: You shouldn’t feel bad about buying tech toys for your kids” is not likely to lead to a thoughtful consideration of the issue. And while the piece is written by a credible technology journalist, Lisa Guernsey, it goes a little easy on the effects of digital technology on children.

She starts by talking about “the special anxiety wrought by tech toys,” explaining that “the source of this new stress comes from the touchiness and second-guessing, the raised eyebrows and passed judgment, and the genuine ambivalence and trepidation that seem to emerge with any decision parents make for their children around today’s new technologies.” Guernsey goes on:

Parents of means—middle-to-upper-income families with high levels of education—likely feel these anxieties most acutely. They have read the headlines about children spending hours in front of screens. They have seen the smiling kids in the commercials for the latest, greatest new e-reader or tumble-proof tablet. And contemporary culture has, so far, provided little more than these polar opposites: technology as either magic elixir or toxic brew. Having spent years trying to answer questions from many of these parents (and having my own struggles as a frazzled mother who spent years covering this issue as a reporter), I see the tension building each holiday season. Should I give my kids this tech toy, or not? If so, what are the consequences? If not, what do they miss out on?

Her conclusion is that parents should relax on this stuff: ”Let’s make 2016 about simply observing and marveling at how our kids like to play, delighting in what makes them laugh, challenging them to work together to solve problems, and talking with them about what they want to do—both on and off screen.”

Stressed-out parents will love the sound of that. (I know I do.) And her suggestion that parents “mentor” kids on digital devices – guiding them through their use -- makes perfect sense. These things aren’t going away, and parents should help their children use them in safe, constructive ways.

But here’s the problem: Even the most sophisticated researcher does not really know what digital technology does to developing brains: The devices are too new for us to assess their longterm impact. There’s still plenty of disagreement, but writers like Nicholas Carr and scientists like Sherry Turkle have written poignantly about what technology does both to our thinking and to our social bonds.

And then there’s the UCLA study which “found that sixth-graders who went five days without exposure to technology were significantly better at reading human emotions than kids who had regular access to phones, televisions and computers.”

Or British educator Joanna de Guia, who says of digital devices: “You don’t get that opportunity to just sit and immerse yourself in a story from beginning to end. That’s brilliant for concentration, and, importantly, it creates a context for the idea of narrative. The amount of concentration required on any digital device is very short… And they conspire to create very short attention spans, and children who want instant gratification.”

Or this Psychology Today story, which concludes: “The bottom line is that too much screen time and not enough other activities, such as reading, playing games, and good old unstructured and imaginative play, will result in your children having their brains wired in ways that may make them less, not more, prepared to thrive in this crazy new world of technology.”

If you’ve been to a kids' soccer game where children on the sidelines gather around a screen to watch a kid on a tablet, or seen a birthday party fragment from a social and physical experience to mass hypnosis when a screen comes out, you know that this isn’t just technophobic hyperventilating. If you’ve seen a bookstore in your town close because fewer people are buying old-fashioned books, you know that these individual decisions have larger social consequences.

And as good as the mentoring idea is, many parents put their kids on laptops or whatever – especially around Christmas – because they don’t have time to deal with their tots. It’s no secret that these screens turn into babysitters no matter the good intentions of parents.

Guernsey is right: Anxiety over what we give to kids and what we let them do isn’t terribly useful. But let’s please continue to be vigilant about all of this. Even around the holidays.