Religion is the real problem: Donald Trump, Ted Cruz and GOP demonize Muslims, but too afraid to take on the real truth

Republicans are terrific at fearmongering about Muslims. But why won't they, or anyone, take on the actual problem? 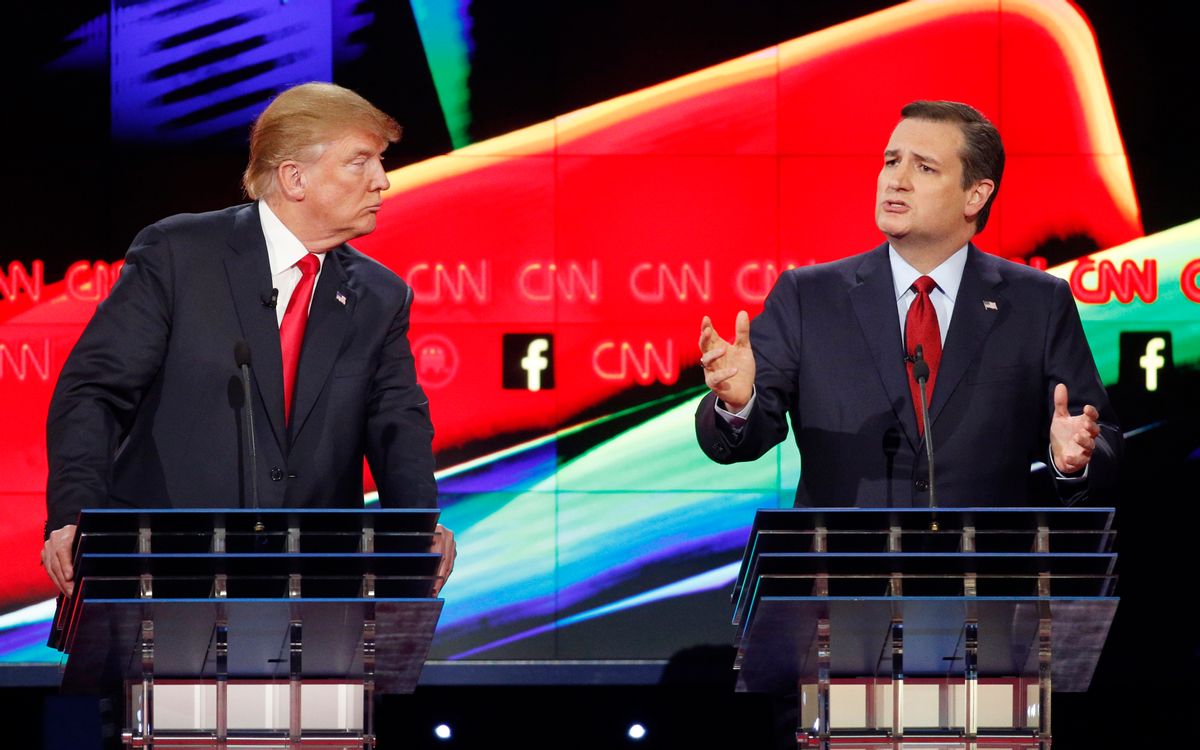 Was CNN’s Wolf Blitzer engaging in sarcasm when he introduced last week's Republican debate in Las Vegas as “a serious and spirited discussion about the security of this nation”?

If so, neither his tone of voice nor his facial expression conveyed a hint of it. Yet the cable news network’s perennial MC was preparing to host an event that would be as serious as any reality show Donald Trump might oversee, and spirited only in the grossest Rabelaisian sense. Instead of slick red-blue-green graphics, the stage’s backdrop for the debate might better have been Goya’s grotesque etching “The Sleep of Reason Produces Monsters.”

For more than two hours, and with few exceptions, the assembled GOP contenders spouted nonsensicalities that no reputable journalist should have let pass unchallenged, and that any diligent moderator would have seized on as evidence of unpreparedness for the commander-in-chief post all covet. Gov. Chris Christie would shoot down Russian planes over Syria and risk nuclear holocaust. The usually phlegmatic Gov. John Kasich would punch the Russians in the nose, and takes seriously the Saudi-led “anti-terrorist coalition” of 34 countries, despite Saudi Arabia’s support for ISIS, and notwithstanding that some of this coalition’s members are less than mighty (Togo, Guinea, and Comoros, inter multa alia), and that at least two were not consulted before being enrolled (Pakistan, Malaysia). Sen. Ted Cruz would carpet-bomb ISIS, but with finesse, in a discriminating way mindful of civilians and perhaps their pets.

Blitzer called “the fight against radical Islamic terrorists and ISIS” the “war of our time,” and recalled the FBI director’s post-San Bernardino warning that we face the “greatest terror threat since 9/11.” Cruz told us that “America is at war,” and reminded us, rather redundantly, of the “very significant threat we face,” and later declared that “ISIS is winning the propaganda war.” Ben Carson announced that “our very existence” depends on defeating “radical Islamic jihadists.” “Our freedom is under attack,” said Jeb Bush, adding that “America is under the gun to lead the free world and protect our civilized way of life.” Christie agreed with Blitzer that terrorist assaults are “the new normal,” and informed us that, “people across this country are scared to death” because “everywhere in America is a target for these terrorists.”

Forget all the wild exaggerations you see above for a moment. At no time during the debate did either a journalist or a candidate enunciate one obvious underlying truth: religion (in this case, Islam, of course) is the problem here.

Belief in jihad, martyrdom, and an apocalyptic Judgment Day are mainstream Islam – that is, based on the Islamic canon (and not, say, just on the preachments of this or that “radical” imam). Islam is the faith of 1.6 billion the world over, including several million Americans. A majority, of course, do not choose to act on the parts of the canon calling for violence, but enough do that we have growing problem with Islamist terrorism. A disturbingly large number of Muslims across the world hold intolerant beliefs that lead, if nothing else, to passive acceptance of Islamist terrorism. And most troublingly, as the very notion of “radicalization” implies, no fixed line between a peaceful follower of Islam and a “radical” follower exists. Which makes sense: the Quran introduces verses on violence and martyrdom, for instance, with no warning “RADICAL MATERIAL TO FOLLOW.” In the Holy Quran, everything is holy.

More broadly, once one accepts, on the basis of no objective evidence whatsoever, religious propositions about the nature of reality, a supreme being, and mankind’s relation to alleged commandments issuing from that being, one confronts an inherent wild card: believers may decide to act on the texts they deem sacred, just as the texts tell them to do. Religion, in short, is the problem – and especially Abrahamic religion, with its monotheistic dogma dividing humanity into the saved and the damned.

Such facts merit frank, reasoned discussion, not fear-mongering and the proffering of sound-bite solutions. This was not forthcoming from the GOP contenders on stage, but then neither has the Obama administration done much better.

Though all those behind the podiums in Las Vegas proudly, even fulsomely, spoke the words President Obama refuses to utter and named Islamism as the primum mobile of ISIS, the contenders took care to avoid Muslim-bashing, with Cruz even reminding us that “it’s not a war on a faith, it’s a war on a political and theocratic ideology.” In fact, they held back a great deal more than some Evangelicals have lately (think Jerry Falwell Jr., and Pat Robertson). Given that Cruz and Rubio are diehard Evangelicals, Carson is a Seventh-Day Adventist, and even The Donald has recently taken to flaunting his alleged (and only alleged) belief in the supernatural, one might have expected some peep of piety, some wink to the Wizard in the Sky (and voters on the ground, especially in Iowa) that hey, we Christians are on the right team, whereas those Islamists are worshipping a false deity.

But no, not a word of that sort. Clearly, they wanted none of the disapproval Trump garnered when he suggested a “total and complete ban” on Muslims entering the United States, and surely they were adverse to claiming that their (imaginary) superhero, born in a livestock leant-to and sacrificed by his (nonexistent) tyrannical dad to get mankind out of the fine mess Eve got it into, would beat out the illiterate merchant-turned-warlord from Mecca in a credibility contest. After all, such a dispute, which might be termed “theological” by the faith-addled (and even by those nonbelievers who blindly follow convention), would quickly degenerate into a “my magic book is cooler than your magic book!” dispute, which would end in slinging mud pies and sticking out tongues. That would be undignified, and we certainly can’t have that at a Republican gathering!

And it would lead us inevitably to one conclusion: religion as a whole, and not just one strain of it, is the problem. None of its far-reaching propositions about the cosmos can be proved. None of them, consequently, deserve respect.

However, and moreover, where is the dignity in the host of such a “serious and spirited” and purportedly politically edifying event not once asking obvious questions that pop to the mind of any rationalist?

To wit: “Dr. Carson, you believe in a sect of Christianity founded on the prediction that Jesus would return to Earth in the 1840s. He did not. Given that you adhere to this sect so strongly that you have had yourself baptized twice in it, on what epistemologically credible grounds can you counter Muslims, who contend that, six centuries after Jesus’ alleged birth, the Prophet Muhammad received updated celestial intelligence that rendered the Bible obsolete?

Gov. Bush, now to you. You were originally an Episcopalian, but then converted to Roman Catholicism, the faith of your Mexican-born wife, Columbia. Does this not constitute flip-flopping on the God question? And if you should ever divorce Columbia, and, say, choose to marry a Muslim woman from Somalia, will you transfer your allegiance to Islam?

Sen. Rubio, you are a professed religious two-timer, attending both a Roman Catholic church and the extremist Christ Fellowship. Are you prepared to follow the instructions of Pope Francis and beat those who criticize your faith? Christ Fellowship refuses to hire gays as a matter of policy. Will you, should you become president, advocate the summary dismissal of gays in the United States government, or do as Christ Fellowship does and screen for them in employment applications? Bonus question, senator: Christ Fellowship performs exorcisms. Has the power of Christ ever compelled you? If so, how?

Sen. Cruz, your turn. You said two years ago that politicians should “avoid ostentatiously wrapping [themselves] in [their] faith” and using faith for its electoral utility. Yet you chose to announce your candidacy for the Republican nomination at Jerry Falwell’s Liberty University, and pandered shamelessly to its faith-deranged audience. Explain the divergence between your words and your actions.

An obligatory question for the above candidates (except, possibly, for you, Mr. Trump): you all sincerely believe in what atheists might term a deranged chiliasm based on supposedly inerrant texts authored by unknown humans in unenlightened ancient times. Please provide objective evidence for your belief. Personal “revelation” and heartfelt sentiment don’t qualify as objective evidence.

Now nowhere am I suggesting that these GOP candidates have no right to the religion of their choice. Freedom of religion is enshrined in the Constitution. But broadcast journalists have a duty to ask, on air and live, tough questions of aspirants to high office and inform their public. Stating belief in a sky god and his magic book suggests gullibility, childish wishful thinking, and a damning dearth of cognitive rigor, and, if nothing else, prompts the question, what other absurdities might they believe in? What does deeply held religious faith say about a candidate’s maturity? Those who are so promiscuous with their convictions are not to be trusted – and certainly not in the White House (where the Lord may order them to make disastrous decisions) and not in schools, with the education of children.

To those who still refuse to admit what could go wrong with entertaining (wholly unsubstantiated) beliefs in an invisible heavenly despot and his binding, inalterable commandments to us humans, the response is simple: 9/11 and Paris, San Bernardino and Colorado Springs. The World Trade Center, 1993. Teheran, 1979. Salem, Massachusetts, in the 1690s. The Thirty Years’ War. The Holy Inquisition, the Crusades, the Muslim Conquests. And so on and so forth, ad infinitum.

It’s time we woke up: religion is never the solution, never to be respected, and, always and ever, the problem.

Wolf Blitzer might want to consider that before convening another debate, be it for Republicans or Democrats.