Steve Harvey’s epic Miss Universe fail: For one moment, we were all Miss Colombia

When host Harvey flubbed his line and crowned the wrong woman, the otherworldly pageant felt all too human and real 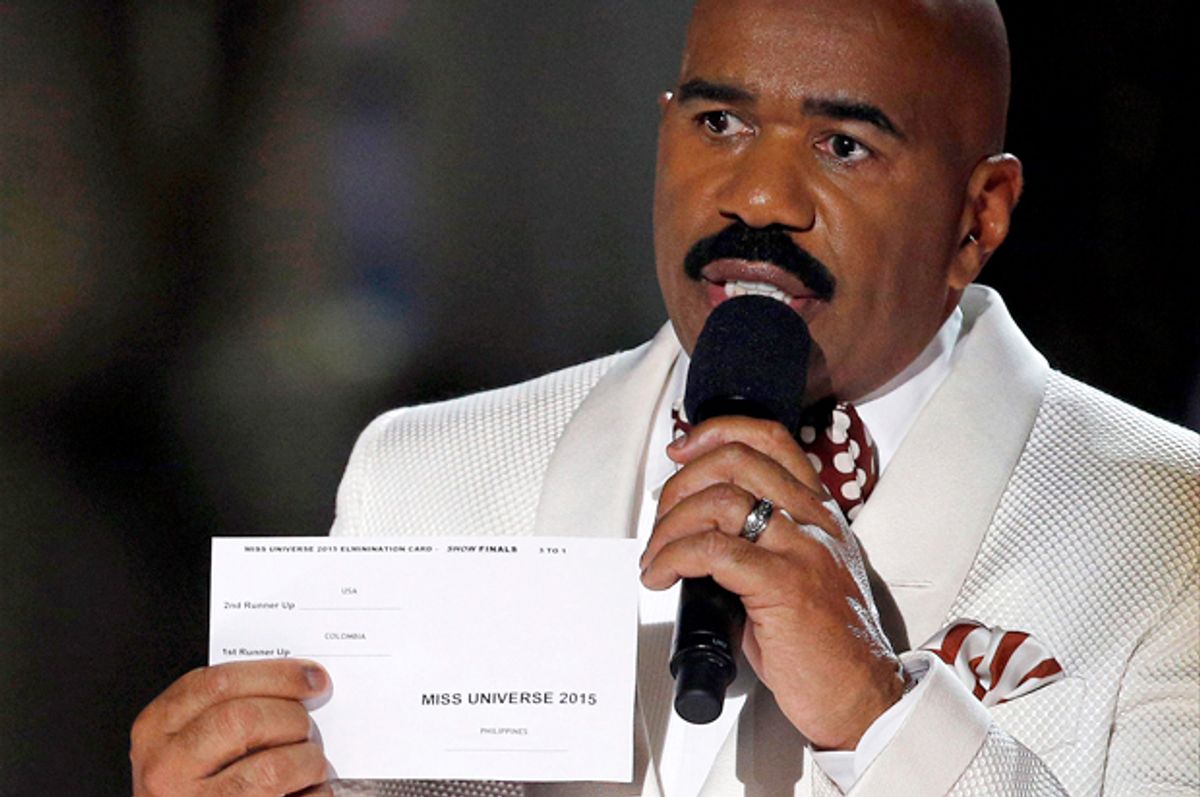 Steve Harvey holds up the card showing the winners after he incorrectly announced Miss Colombia Ariadna Gutierrez as the winner at the Miss Universe pageant on Sunday, Dec. 20, 2015, in Las Vegas. (AP/John Locher)
--

Imagine this: you spend months -- years, even -- in preparation to achieving a goal. You skip parties, forego your favorite foods, quiz yourself daily on current events, and change your body to look not acceptable -- but as close to perfection as possible -- in swimwear and evening gowns. You do this alongside beautiful women from all over the world, all of you in front of an audience of representatives from your home country, aired on television for millions of viewers around the globe. The women on stage are fierce competition as well as peers; you respect how far each has come, but still hope to be the one left on top.

Think about the moment when you get everything you’ve ever wanted. You’re a winner, you’ve earned it. Despite the odds, you’ve made the impossible happen through perseverance, dedication and faith in yourself. For a second you don’t believe it’s real -- how could it be? But then the cameras start flashing, flowers are handed to you, and a crown is placed atop your expertly-coiffed head. You’ve done it.

You’re queen of the universe.

Breathe in the relief, excitement and sense of achievement. Exhale, and have it taken away just as suddenly and so cruelly.

The faux pas will live in unfortunate infamy, allowing few to savor the victory.

From the clip, it’s clear that something went wrong. Miss Colombia, who used an interpreter for the duration of the pageant, basked in what she believed to be her hard-earned title as Miss Universe. Both she and Miss Philippines gave stellar performances throughout the pageant by epitomizing grace, femininity and strength.

Miss Colombia accepted her crown as Miss Philippines stepped graciously to the back, joining the remaining beauties who fell short of the crown. From there, things got weird.

After a round of applause, the crowd fell eerily silent -- like a storm about to strike. The camera shots switched from close-ups of the winner’s elated face, to wide shots of the crowd. Harvey appeared back on stage with trepidation. How do you tell a woman on top of the world she’s actually the runner-up, and now must take away her crown and her dream in front of the entire world per your own mistake?

Harvey apologized on air and later via Twitter (where he misspelled both countries’ names), and stated no one felt worse about the situation than he -- but I beg to differ. (The original tweet was deleted shortly after, but not before it was screen-grabbed and shared again by many.)

I don’t think anyone could possibly feel worse than Miss Colombia and Miss Philippines surely do. Arevalo had very little understanding of what was going on given the language barrier and sheer excitement of believing she won. Former Miss Universe and Colombia native Paulina Vega was ultimately the one to de-crown her compatriot while explaining the error.

It’s clear from the footage that Wurtzbach had no idea what was going on either. There’s a moment when you can see a brief flash of recognition followed by a slight hesitation. Why would she think something so out of this world was occurring in her favor? Miss U.S.A was less discreet in her shock and amusement at the situation, and confirmed the news -- Miss Philippines was the winner.

Reluctantly she rejoined Arevalo on stage as the camera struggled to achieve synchronized shots. Wurtzbach’s surprise and excitement was featured in tight shots of her soon-to-be-crowned head, before switching to wide angles avoiding the likely horror, embarrassment and tears on Arevalo.

What was either woman to do in that situation?

Ultimately, Vega removed the crown from a dismayed Arevalo and placed it on Wurtzbach, who seemed reluctant to accept it. Victory isn’t as sweet second-hand. The show rushed to credits, avoiding any further publicly-aired discomfort for viewers, contestants and audience members.

It’s a particularly relevant moment in cultural history because it’s not exclusive to beautiful women. Anyone can relate to the feeling of reaching a near-impossible goal, whether it be professional, romantic or anywhere in between. You fancy yourself lucky for the opportunity, but are also proud for earning it. We can all identify with the pain of losing something you never had. This year’s Miss Universe pageant was transformed from what was intended to be an inspiring and empowering event for women to a showcase of loss for everyone involved.