The Democrats are using Trump to pull the GOP apart, and Trump is eating their bait up eagerly 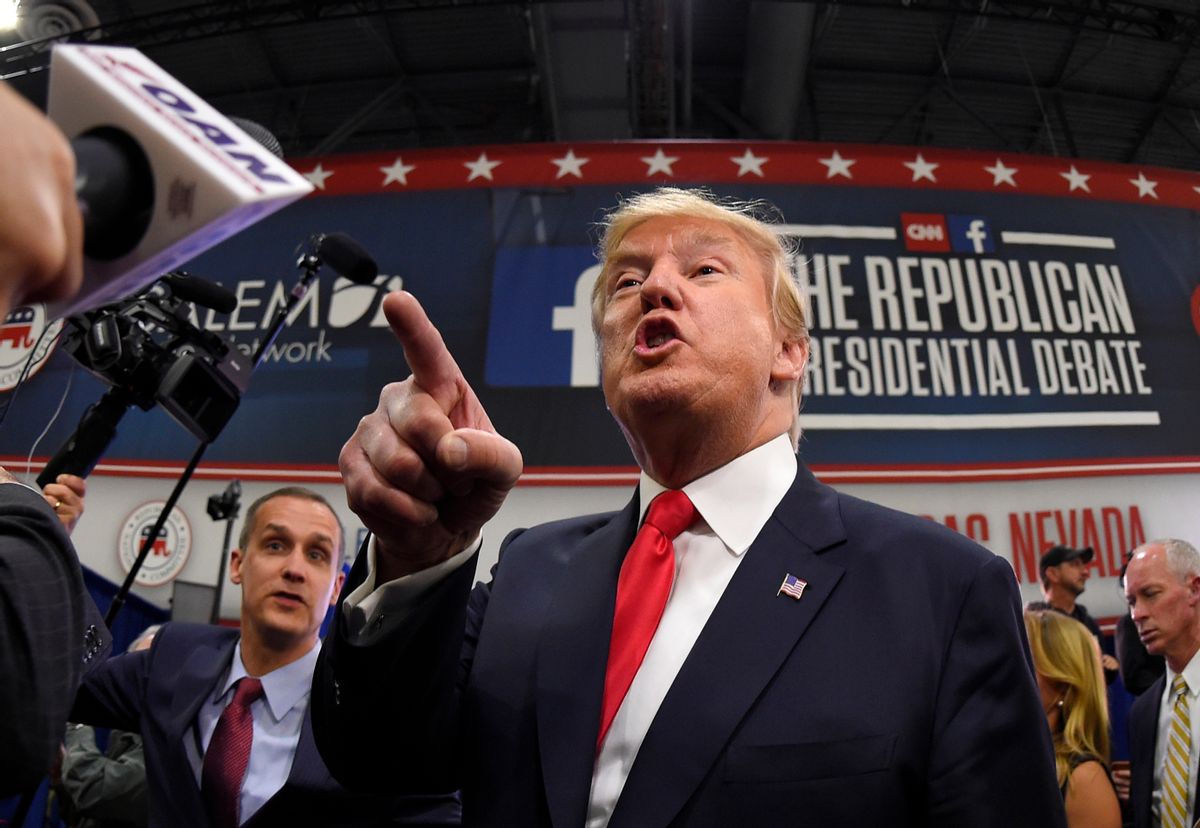 As with the prior Democratic debates, Saturday night's in New Hampshire featured many points of difference between candidates on issues like college affordability, national security and taxes. But there was one thing the candidates clearly were all in lockstep on: They really, really want Donald Trump to be the Republican nominee.

In fact, they want this so badly that they're just going to act like he's the nominee already. To watch Saturday's debate, you would think Trump already has this thing locked down, and it's all over but for the paperwork. All three candidates went hard after Trump, ignoring all of the other Republican candidates. The only time the name "Bush" came up was in reference to George W. Bush. Marco Rubio, Ted Cruz, Ben Carson, Carly Fiorina: Not one of them was name-checked all night.

In contrast, Donald Trump's name was spoken by candidates 12 times.

Much of the post-debate coverage has focused on how Hillary Clinton, who is the clear frontrunner now, has pivoted from trying to win the primary to focusing on the general election voters. So it makes sense that she would start going hard after Trump. It's not just because he's the frontrunner, either. As Matt Yglesias at Vox notes, Trump's "campaign is fueled by attention" and he wants " the votes of Republican primary voters who hate Hillary Clinton." Having her bash Trump repeatedly is bound to rile conservatives up and send them rushing to support him.

In this effort, Clinton had two extremely helpful supporters in Bernie Sanders and Martin O'Malley. It was clear that all three candidates really wanted to make it a contest of who could criticize Trump the most, and it was all very satisfying. Some highlights:

"He is becoming ISIS's best recruiter," Clinton said of Trump. "They are going to people showing videos of Donald Trump insulting Islam and Muslims in order to recruit more radical jihadists."

"Meanwhile, the rich get richer," he added.

It's a fascinating strategy, for which some martial arts analogy might work. All three candidates clearly grasp the Trump, being the platonic ideal of a bully, loves to dish it out but cannot take it. His ego is also enormous and he cannot quietly demur when others speak his name. Name-checking Trump like this is bound to bring him out, make him angry, and cause him to go off.

And like clockwork, it did. Fox News invited Trump on to respond and, just to add icing to the cake of utter predictability, Trump gave in to his most misogynist urges.

He can't even muster the enthusiasm to call Clinton "her". A woman who speaks back to him, who dares criticize the mighty Trump, gets reduced to a "that."

The Republicans don't know what to do with Trump. Everything they throw at him just seems to make him stronger. But the Democrats are playing him---and his supporters---like a fiddle. They know that he can't take criticism, that he's a misogynist, and that he will lash out, probably with some misogyny. And so they poke the bear, over and over, because it's a near-certainty that he will say something really unsavory that will turn the majority of voters off.

But, and this is where things get even more hilarious, it doesn't turn off right wingers. On the contrary, it's clear at this point that Trump's flailing and invoking of sexist stereotypes to put women in their place reads as "strong" to his followers, even as it looks like a childish temper tantrum to everyone else. And so it shores up his support.

In other words, the Democrats and Trump currently have a symbiotic relationship. They criticize him, he lashes out, both sides get a boost. As weird as that initially seems, it makes a rough sort of sense. Both Trump and the Democrats want to wedge the other Republicans out of the primary race, and this is how they'll do it.

But, and this is just another piece of evidence (not that you needed it) that Trump is a short-sighted idiot of the first order: Once the general election starts, this little dance they're doing will only benefit the Democratic candidate.

That goes double if it's a Clinton-Trump standoff. It's clear now that there's only so much self-restraint Trump can exercise in the face of a woman disagreeing with him, much less criticizing him. In a general election, his staff will probably coach him to avoid doing things like making jokes about Clinton's looks or calling her "that," and he'll try half-heartedly, until he caves and says the horribly misogynist thing that the Clinton campaign can feast on for weeks.

Under the circumstances, don't be surprised if the next Democratic debate is just a bunch of candidates crawling over each other to say the word "Trump" as much as possible. After all, as much as they want to defeat each other, defeating the Republican Party is still priority number one. And they know just the bright orange man that can get the job done for them.