Taunted by Draco Malfoy, she always had to be twice as good to be seen as an equal to the other wizards-in-training 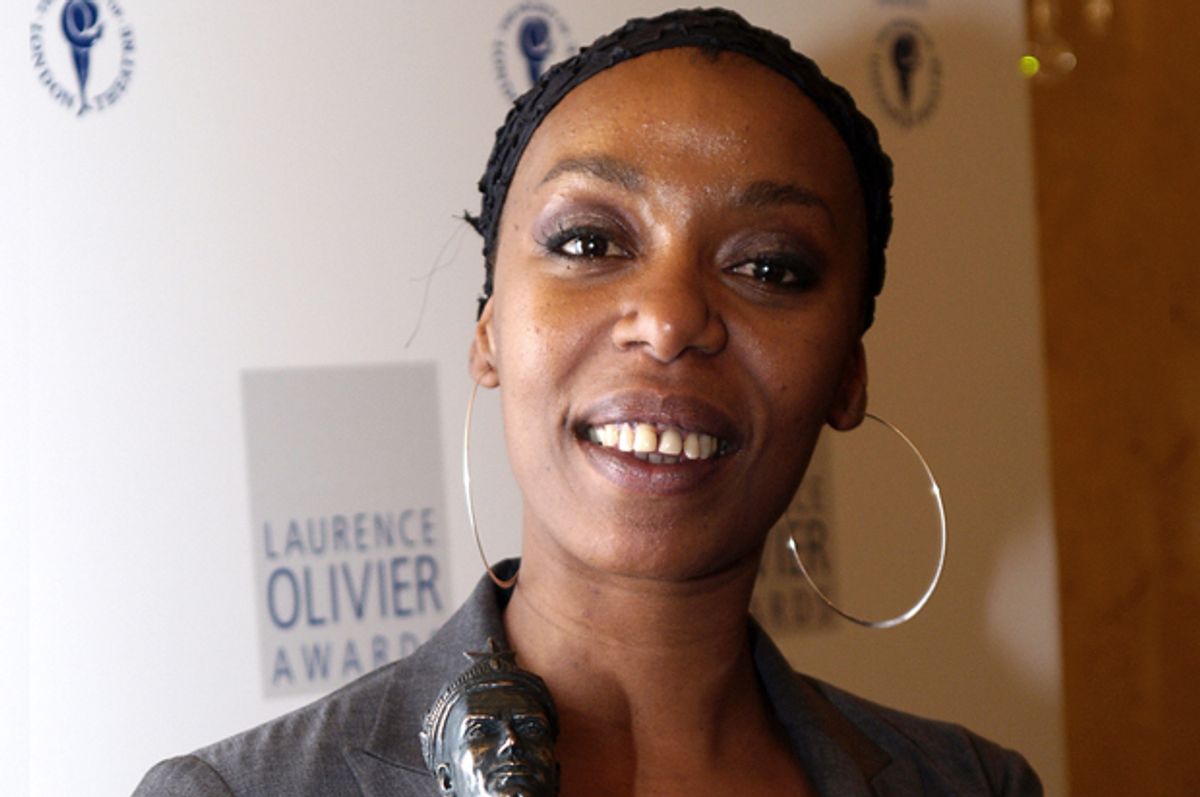 A black actor, Noma Dumezweni, will be playing Hermione Granger in “Harry Potter and the Cursed Child,” which is set to play in London’s theater district in 2016. Consistent with the aging of the characters across the span of the original seven-volume series, Harry, Ron, and Hermione are now adults heading into middle age — yes, it really has been nearly two decades since the release of “Harry Potter and the Sorcerer’s Stone” in 1997 — and Harry is a harried bureaucrat in the Ministry of Magic. Married with kids, but we already knew that at the end of the “Harry Potter and the Deathly Hallows.” He’s still hanging out with his two best friends, but Ron has changed his hair and Hermione is race-bent.

Is this P.C. bullshit stunt casting, or a change whose time has come? What’s “black” about original Hermione? Let’s start with the fact that she literally needed to be twice as good a student as the rest to get any respect from her teachers, not to mention her peers, and once used a time-turner necklace to accomplish this impossible task. She’s repeatedly disdained as a “mudblood” by the practically albino (*cough* white supremacist *cough*) Draco Malfoy. And, let’s not forget, it was Hermione who founded S.P.E.W. —  the Society for the Protection of Elf Welfare — in order to champion the rights of elves and other creatures kept in a magical state of indentured servitude. (*Atchoo!* slavery *Bless you!*)

Black Twitter asked Rowling for her thoughts about the producer’s decision to cast Dumezweni as Hermione. She minced no words in her defense of the casting, which came under predictable fire from Racist Twitter, of course. In response to the furor, the author pinned a tweet to the top of her feed: “Canon: brown eyes, frizzy hair, and very clever. Skin color was never specified. Rowling loves black Hermione.”

For fans furious that adult Ron is blond and Hermione is black, it is worth pointing out that a) “Harry Potter and the Cursed Child” is a play, so unless you live in London your eyeballs are probably safe, and b) if it gets made into a film, take heart in the fact that Hollywood has a habit of whitewashing characters of color, especially when the heroic leads are female. In the book version of the “Hunger Games,” for example, Katniss Everdeen is not white. In the franchised film version, she is Jennifer Lawrence. In the children’s book, “Peter Pan,” Tiger Lily is Native. In the latest blockbuster version, “Pan” (also one of the biggest flops of 2015), she is Rooney Mara. In the manga, “Ghost in the Shell,” Major Motoko is Japanese. In the forthcoming film version, she’s Scarlett Johansson. Etc.

Meanwhile, the film franchise version of “Harry Potter” as well as the forthcoming film, “Fantastic Beasts and Where to Find Them,” based on a J.K. Rowling spinoff, have both been robustly criticized for being white enough to pass muster with the Malfoys. For his website, “Every Single Word (Spoken by a Person of Color),” Dylan Marron worked his damning magic on the entire “Harry Potter” series—all 8 installations, totaling 1,207 minutes—and it turns out that white people dominated the conversation 99.5 percent of the time. What’s worse is that in order to get 5 minutes and 40 seconds of dialogue by “people of color,” Marron had to include talking magical monsters such as centaurs.

The patrician fictions of “Downton Abbey” notwithstanding, real-life London has robust populations of people of color, and some of them even go to those bastions of privilege known in the U.S. as “boarding school.” Such as, say, Sir Salman Rushdie, a Muslim Indian, Knight of the British Realm, and alumnus of Rugby School in Warwickshire. He is as complicatedly British as Dumezweni, who was born in Swaziland, spent her childhood in Suffolk, and is a current resident of London. Her many accomplishments include winning the Olivier Award—England’s equivalent of the Tony--for her supporting role in the 2006 London production of Lorraine Hansbury’s acclaimed play, “A Raisin in the Sun.” She’s worked as hard as Hermione to get to the top of her craft, while battling the usual demons in order to get the recognition she deserves.

As Viola Davis said in her historic acceptance speech for winning “Best Actress in a Drama” at the 2015 Emmys: “ The only thing that separates women of color from anyone else is opportunity. You cannot win an Emmy for roles that are simply not there.” If the "Star Wars" universe can manage to add a female action lead and a black hero and conjure up record-breaking 500 million dollars in box office this past weekend, why shouldn’t Harry Potter World abracadabra them together and give us a fierce black Hermione? The beauty of fictional worlds is that they are what we make of them. It’s the ugliness of real life that needs to change.