Steve Harvey has always been bad news for women: Ruining the Miss Universe pageant is just the tip of the iceberg 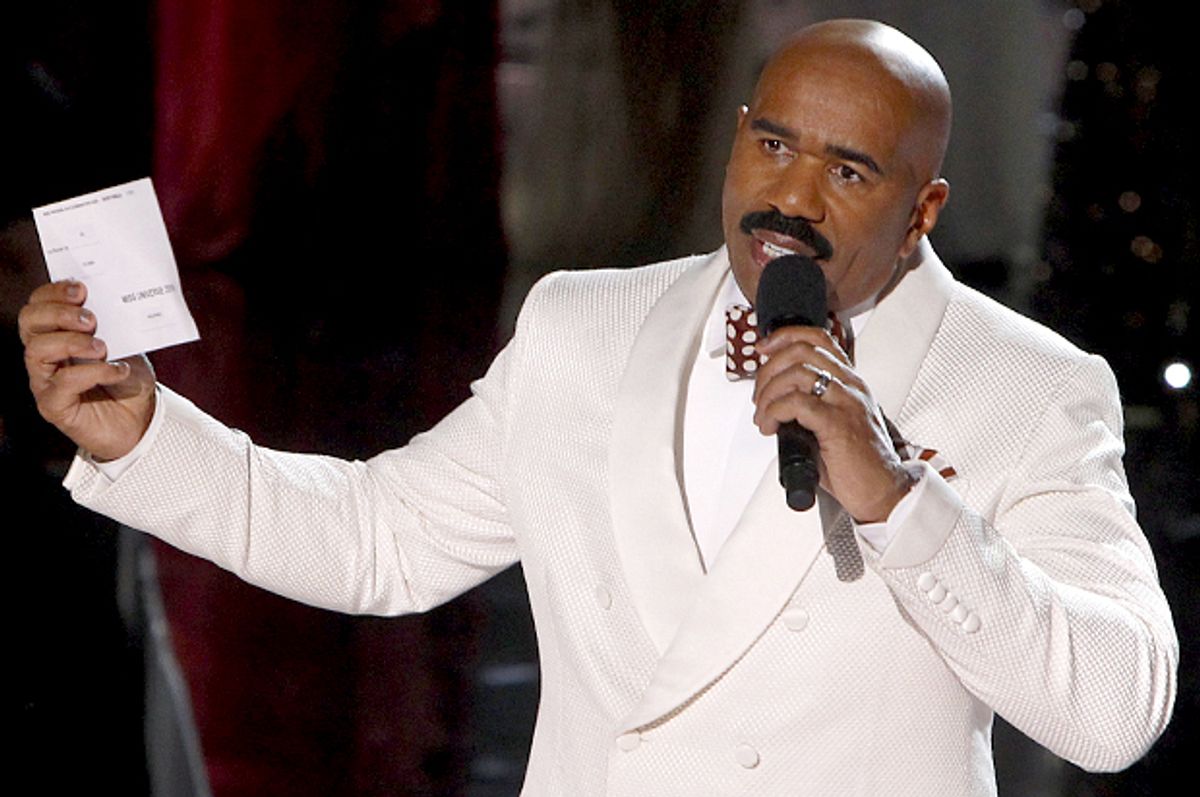 If you have a pulse and an Internet connection, you’re probably aware that Steve Harvey committed one of the most awkward facepalms in history during last night’s Miss Universe pageant. The comedian—who was tapped to emcee this year’s contest—accidentally read off the wrong name when it was time to announce the winner. After crowning Miss Colombia the victor, Harvey apologized and redacted the statement: The title was actually supposed to go to Miss Philippines. That moment when she’s forced to gingerly take the crown off Miss Colombia’s head might go down as one of the most painful in live television history.

But here’s the real question: Why was Steve Harvey allowed anywhere near the pageant in the first place? On the Miss Universe Organization’s website, president Paula M. Shugart touts ideals that pay lip service to feminism: “MUO is a company dedicated to empowering women by instilling the message of being ‘confidently beautiful’ in their everyday lives.” And in a post for Bustle, Lindsay Denninger reminds us that this is a group of immensely accomplished women. “They’re educating young girls on sexual health,” she writes. “They’re building acting careers. They’ve escaped war-torn countries to make their own dreams a reality.”

Of course, Harvey didn’t admire these women for their immense contributions to making the world a better place but instead for their assets. According to Denninger, Steve Harvey’s commentary as the host was nothing but a series of comments about how great the ladies looked in their bikinis.

This shouldn’t be surprising to anyone familiar with Harvey’s brand. The comedian and former sitcom star—whose “The Steve Harvey Show” lasted for six years on the WB—built his career as a self-help guru on disguising sexism as female empowerment. Harvey’s 2009 book, “Act Like a Lady, Think Like a Man,” spent an absurd number of weeks atop the bestseller list, announcing him as the man’s answer to Oprah Winfrey—a straight-talking self-help coach who says what everyone is thinking. If Nancy Meyers promised Mel Gibson a portal into the female brain, Harvey promised to tell women what men want and how to give it to them.

But Steve Harvey doesn’t want to help women as much as blame them for all of men’s shortcomings. Harvey’s ideas about relationships have a disturbing undercurrent of “boys will be boys” apologia, arguing that men are this way for a reason and women might as well deal with it. On the subject of cheating, Harvey believes that men cheat because they are weak, but it’s also a woman’s fault if the man strays; after all, no man would do that if he were satisfied in his relationship. “I have a chapter in the book talking about what a man has to have: support, loyalty, and ‘the cookie,’” he told Time magazine. “If any of those things are missing, he's going somewhere to get it, because he has to have it.”

As Dodai Stewart pointed out in 2011 post for Jezebel about “Think Like a Man”—the film adaptation of Harvey’s book—the problem with Steve Harvey is that he believes the burden of changing behavior should be placed solely on women. In his book, he routinely advises ladies to give in to men’s faults and insecurities. For instance, Harvey tells women that he realizes that they’re perfectly capable of making the trip to Home Depot. However, he says, “But I lie to you not: If you put your finger in your mouth and act like you haven’t a clue what to do or the strength to do it, your man will step right in and handle that for you.”

His entire dating mantra is based around these principles: Men are pigs and women need to lie to them and manipulate them to get a relationship out of them. One of the cornerstones of his book is his much-touted “90 Day Rule,” a prohibition for women to avoid giving it up before the three-month mark. He tells women that it’s about “getting the respect you deserve,” but it really amounts to pointing the finger at women’s sexuality: “Think about it: the first guy you slept with quicker than ninety days—where is he? I’m willing to bet that you’re probably not with him.” Ladies, maybe you aren’t with your ex-boyfriend because he’s a stalker, a narcissist, or hey, maybe it just didn’t work out, but no matter what, Steve Harvey thinks it’s on you.

This slut-shaming is par for the course when it comes to Harvey’s advice-giving. Steve Harvey also hosts a daily radio show he gives feedback to the women who call in. “Get it through your head, you are the Friday girl,” he instructed one woman. “That is just for sex. That's what you are. He's not going to graduate you to his wife. We don't upgrade sex girls, we don't do that.” If reports suggested the taping for a special Harvey hosted on “What Men Really Think” devolved into a “rapey” deluge of catcalls and harassment, this is surely a product of Steve Harvey’s own problematic views. (As a number of critics pointed out, Harvey didn’t exactly stop the situation.)

But of course, Steve Harvey loves women. He just doesn’t want to listen to them or consider their perspectives actually valid. This snippet from his book pretty much gives up the whole game. “‘We need to talk.’ For a man, few words are as menacing as those four--especially when a woman is the one saying them and he's on the receiving end,” he writes. “Those four words can mean only two things to men: Either we did something wrong or, worse, you really literally just want to talk.” And then during an interview with Joy Behar on CNN, Harvey actually laughed when a woman asked how to get her husband to stop nagging her. He called it a “first.”

This is pretty much the advice you would expect from an alleged serial cheater who’s been divorced three times, and it’s time to stop giving Steve Harvey a platform to spout regressive garbage that’s harmful to men, women and everyone else. After all, Harvey is an incredibly successful one-man empire: In addition to being a radio show host and best-selling author, he’s also the current face of “Family Feud” on daytime television. “Think Like a Man” not only spawned a sequel, it also is being developed into a TV series. For Harvey, this is just the beginning.

What happened during the Miss Universe pageant might be awful, but it’s not nearly as horrible as the realization that Steve Harvey is going to be around for a long, long time.