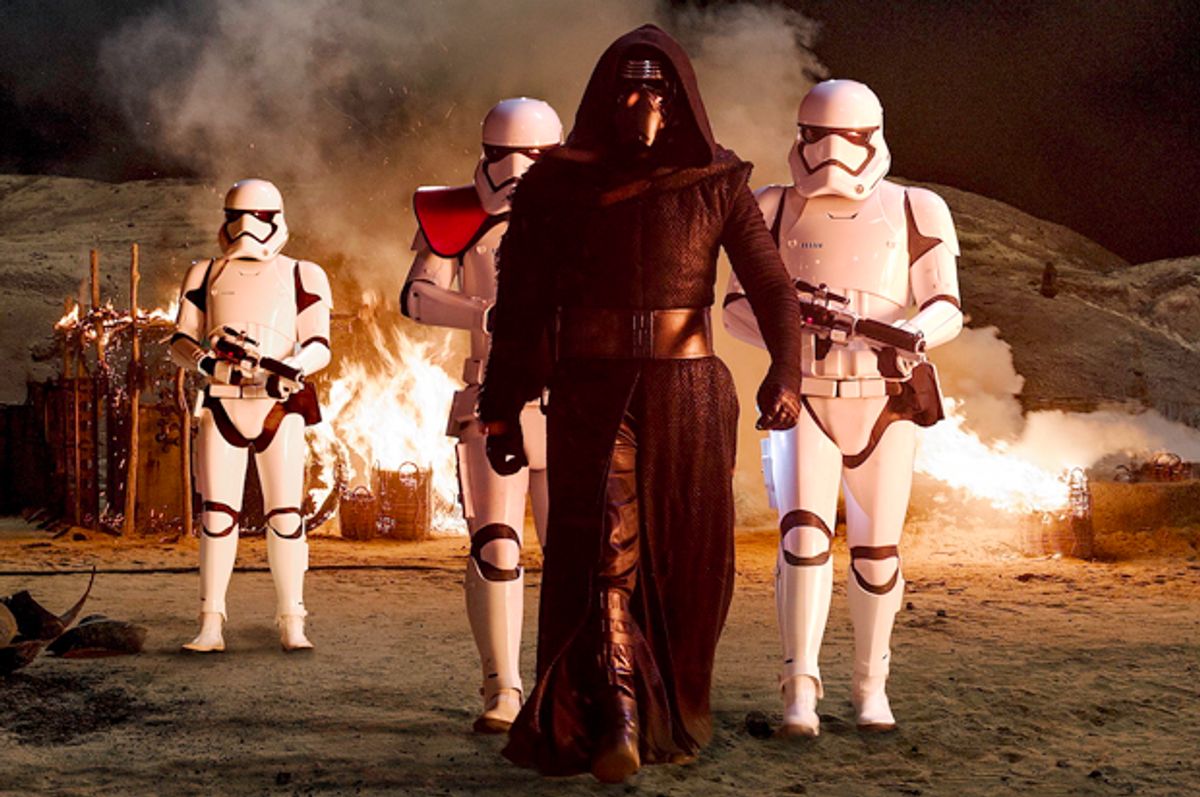 Warning: Major spoilers ahead. Don't read if you don't want any details on the plot points of "Star Wars: The Force Awakens."

"Star Wars" is shallow and silly and campy and fun, and a dozen other synonyms that suggest we shouldn’t think about it too hard. I don’t usually—I watch “Star Wars” with an impressionist eye, the way I watch “Jessica Jones” or J.J. Abrams’ "Star Trek" “reboot” or any of many films based on comic books. The gaping plot holes will ruin your fun if you let them, so you follow the camera’s invitation to insist on your pleasure and thread your way around them.

"The Force Awakens" is the franchise’s most appealing invitation to chase that narrative high, because there’s just so much to like: Daisy Ridley’s Rey is grounded, competent and intense—everything a hero should be. A feminist thrill, a refusal of teachers. John Boyega’s Finn is warm and hilarious, Oscar Isaac’s Poe is a charisma-generator. Even the much-maligned CGI worked for me: I’d happily watch a film series starring Lupita N’yongo’s Maz. As for BB-8, I started worrying about it the way you would a pet: Why don’t they hide it? Or at least paint it a different color? But they don’t, and that’s just the first of many irritating little nits one could pick with the latest "Star Wars" film. How, for instance, is it possible that the Resistance doesn’t have a map of the galaxy?

I chose, at first, to read BB-8’s partial and unreadable map as a kind of metaphor for the film as a whole: “The Force Awakens” is an island of relational information that’s pretty meaningless without the surrounding context. Context like: What sort of father was Han? What kind of mother was Leia, and how powerful is she? How—besides being clear knockoffs—do the Resistance and First Order relate to the Republic and the Empire? Where are the Jedi ghosts and what do they think of Vader’s skull? How did Kylo Ren pick his haircut and what even is his deal? How big is Snoke?

Our sense of scale is in constant flux, in other words—nothing can signify unless we understand what it’s next to. “The Force Awakens” half-promises to deliver that useful context in future movies, but that's neither an answer nor a solution to some of the problems the film poses. It's lazy storytelling, but it's also asking your audience to be moved by a placeholder. It's painting a sad face on cardboard. It's asking for a loan. While some scenes are terrific, dynamic and beautifully paced--I'm thinking of the lightsaber duel and Poe and Finn's first flight--the climax of the film asks the audience to project emotional resonance on a situation that has (and I cannot emphasize this enough) none. The Han-Ben relationship is among the emptiest I've ever been asked to mourn.

This is typical: "Star Wars" tends to leech off myth the way the latest, biggest Death Star Starkiller thing drains the sun. Rather than provide grounded, specific motivation, it names a relationship (usually "father” and “son”) and expects the audience to weep. The hope is that we'll project some content onto a relationship that's almost admirably featureless. And it works! These projections are already blossoming in fan discussions of the film: Can you imagine being raised by Leia and Han? Two emotionally distant legends? one person says. No wonder he’s messed up. You may be right, random Internet commenter, but the problem is that you shouldn’t have to imagine it. A scene showing their connection or history might have earned the effect the movie gropes at by informing us--in a lamentably expository scene between Leia and Han--that Kylo and Han are father and son and that their meeting will therefore constitute a weighty moment.

So why is that an issue? Can’t we overlook it? Well, sure. We can overlook anything, and fans routinely do. But this particular tendency worries me because "Star Wars" has become a strange self-justifying behemoth of its own fandom. People admit all its flaws and in the same breath forgive them, because the films offer something bigger that satisfies. We can forgive a lot in the name of fun, and "Star Wars" is something people look to for inspiration and meaning and philosophy, and we need that.

But the franchise--and this film in particular--is catastrophically confused about its own psychology in ways that should trouble us precisely because it satisfies. Take, for example, the annihilation of several planets, and the way we're invited to regard them as so marginal to the story that no one even seems to remember it happened by the end. When you’ve actually invented a tragedy that’s hundreds of thousands of times bigger than the Holocaust (in a film that prominently references Nazis) only in order to threaten that they’re about to do it again, in a matter of seconds, YOU CANNOT ASK YOUR AUDIENCE TO CARE THAT SOME GUY AND HIS SON ARE WASTING THOSE ESSENTIAL SECONDS HAVING A MOMENT ON A BRIDGE.

No. You cannot. That is a fatal flaw. That is an inversion of stakes so monstrous that it makes the film actually despicable. It’s a case study in how not to use “kill the cat” in your script.

I don’t mean that you can’t physically do it. You can. "Star Wars" did. People are buying it. But wow, it’s an ugly thing. So is the extent to which we've accepted the film's invitation to overlook it. Possibly the worst instance of the franchise’s myopia—which has a long history of overlooking the deaths of thousands of people to focus on the painstaking project of redeeming a troubled (white, male) murderer. Millions upon millions of people died, and the movie doesn’t take a second to recognize the magnitude of the tragedy, or show Leia grieving, angry or strategizing, as a good general should. That has ramifications for her character. We see her stricken by Han’s death, not the deaths of entire ecosystems under her care. Fisher is more than wasted here: with less screen time than Chewbacca or BB-8, the few moments she gets demonstrate only that she’s a mealy-mouthed politician (sure we’ll get your friend, but first tell us everything, she tells Finn) and a bad general.

In a film that so successfully introduces a new set of characters (and robots!), there's no sugar-coating the fact that Solo’s death scene betrays its nostalgic blind spot. Remember when Obi-Wan sensed and mourned Alderaan's destruction "as if millions of voices cried out"? That's gone: Now nostalgia powers the film's sudden indifference to the world it built and the principles that govern it. That’s unsustainable. Massive death is not a throwaway incident, in the "Star Wars" universe or in any other. It cannot be a secondary consideration, even to a beloved character's death. That it works, here, registers how degraded our own feelings have become--how much closer we are to finding mass killings sort of forgettable, and by extension sort of acceptable. The whole point, after all, is that those planets were Not Us. We very briefly see the inhabitants witnessing their own demise, and then we're granted the relief of ... nothing. Amnesia.

Perhaps that exemplifies how perfectly American the franchise really is: We don’t care about the blown-up planets, because they're not us. Worse, even when they are us—even when the Resistance is seconds away from being annihilated—it’s important for everyone to pause and respectfully watch as two guys have feelings instead of doing the right thing and blowing them both up because choosing that particular moment to commune condemns them as self-indulgent monsters.

(It would be so easy to fix this: do not set up your stakes so that the potential redemption of a murderous teenager and an absentee dad competes with -- and trumps -- the deaths of millions of people.)

Even more troubling than the Not-Us-ing that hypnotized us into ignoring eight annihilated planets is what I'll call "Star Wars'" “Is-Us-ing.” People moved by that scene on the bridge were afflicted by nostalgia, not by a touching father-son scene—again, the relationship has exactly zero content to which we can affectively attach. That's ugly too: It shows that our shock at multiple ecocides can be diverted into the thrill of recognition we get from recognizing the structure of that moment on a bridge. The scene invites us to approach as fans rather than think about the horrifying demand it's making of Rey, Finn and especially Chewbacca (who, because he has the detonator, faces the most difficult decision of all: whether to blow up his best friend to save millions of innocent lives).

We’ve been trained, in other words, to believe that nothing has more narrative importance—or artistic merit, or emotional heft—than the spectacle of a white man who hides his feelings suddenly showing them. We aren't seduced into empathy with the Resistance as a whole, or with the people who will die, or even with Finn and Rey and Chewbacca, but with the silly twosome. “Hey!” we say as we watch two men with moist eyes trying to imbue a pretty underwritten scene with meaning -- and we forget all of humanity and the universe’s self-interest, and the actual stakes of the actual world -- "that's us!”

Which brings me back to BB-8's partial map. "The Force Awakens" does some beautiful visual work in the first third--zooming out and out and out from Rey's labors until you see the scope of her ascetic existence and the ruins the old wars left behind. That early commitment to supplying context and scale falters in the latter third of the film, which withholds so much that it starts commenting on its own withholding (cf. C-3PO's allusion to his unexplained red arm and Maz's remark that it was a good question "for another occasion").

The surprising effect? I experienced BB-8's reunion with R2-D2 as the most affecting scene in the whole film. There was something so grounding and moral and sane about two tiny robots collaborating and projecting, with their bellies, the complete and complementary story the humans were too silly and blind to tell.