White men must be stopped: The very future of mankind depends on it

For 500 years, they've exploited their fellow man and plundered the planet. It's time they rein themselves in 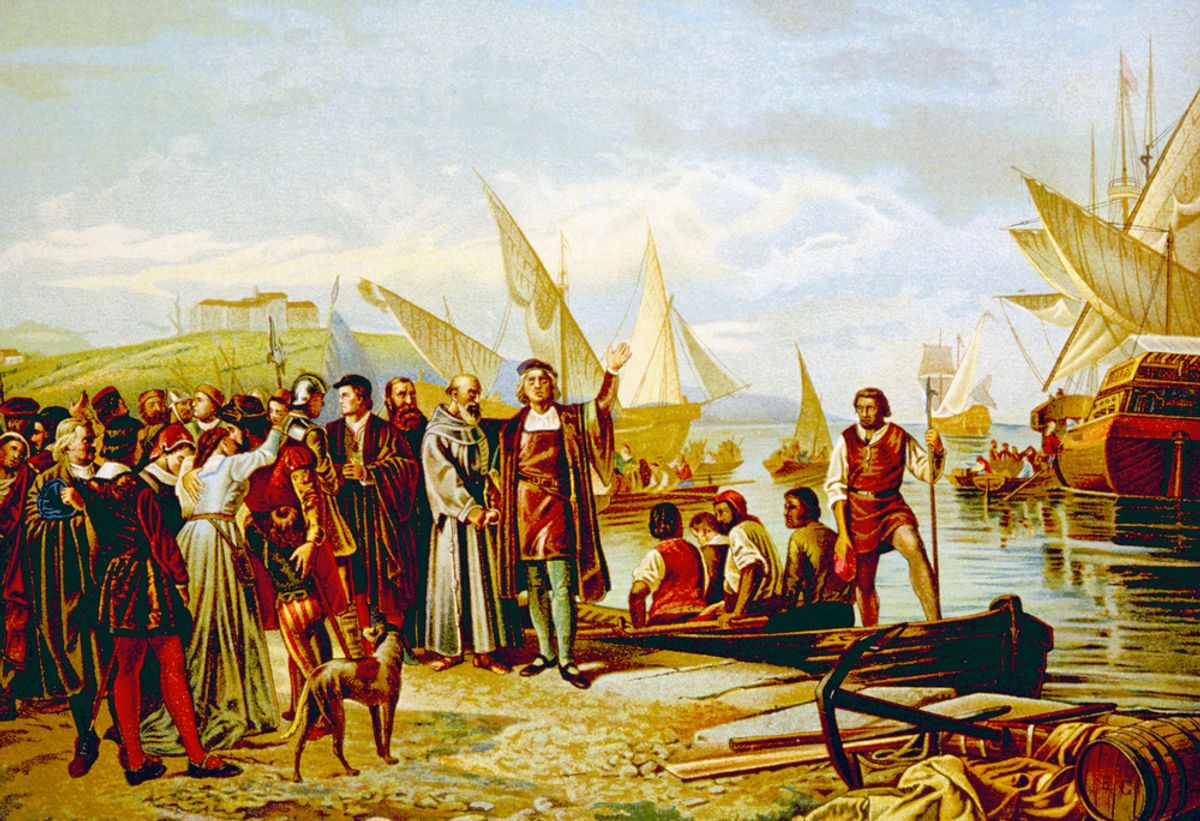 The future of life on the planet depends on bringing the 500-year rampage of the white man to a halt. For five centuries his ever more destructive weaponry has become far too common. His widespread and better systems of exploiting other humans and nature dominate the globe.

The time for replacing white supremacy with new values is now. And just as some whites played a part in ending slavery, colonialism, Jim Crow segregation, and South African apartheid, there is surely a role whites can play in restraining other whites in this era. Beneath the sound and fury generated by GOP presidential candidates, Fox News, website trolls, police unions and others, white people are becoming aware as never before of past and present racism.

Admittedly, this encouraging development is hardly the dominant view. To the contrary, given the possibility that Donald Trump, Ted Cruz, Ben Carson or one of their ilk might become president, white supremacist ideology seems to be digging in harder than ever.

I don’t take this lightly. Once upon a time I foolishly thought that there was no way that Ronald Reagan could get elected president. Lesson learned. Now is the time to start contingency planning for intensified resistance to mass deportations of immigrants, atrocities against Muslims and extreme danger to African Americans.

That said, it would be a mistake to focus only on the negative. Recently theNew York Times ran Gordon Davis’ op-ed What Woodrow Wilson Cost My Grandfather. It is still generating debate. (Gordon Davis and I are both “alumni” of the Northern Student Movement, a 1960s civil rights group.) Davis was writing in the context of the student-led protest at Princeton University over the veneration of its former president, Woodrow Wilson. The controversy stems from Wilson’s viciously racist speech and behavior particularly when he was president of the United States.

A subsequent Truthout article by Harvey Wasserman, "Princeton Students Are Right, Woodrow Wilson Was Way Worse Than You Think," complements the critique. Most of the 776 comments on theNY Times article (as well as 1,600 more on a followup Times editorial) were the predictably negative responses usually heard regarding white racism. Many said some version of, “that was a long time ago when values were different.” Others took the tack that “nobody is perfect and the good things Woodrow Wilson did outweigh the bad of his racism, so let it rest."

But there was also a substantial undercurrent voiced by those who were open-minded enough to learn.

Following are NY Times comments on the article:

As a former Princeton professor, I applaud the students for raising this issue. It's not about erasing history, but confronting it honestly. This beautiful column makes clear how Wilson's policies, based on his deeply racist and white-supremacist views, destroyed the lives of thousands of black families. Why should we publicly venerate this person? Why should elitist Northern universities get to insist that we overlook this man's systematic, consequential racism, while every Southern municipality and retail store is expected to rid itself of monuments and souvenirs of their racist politicians and soldiers. Let's indeed, every American community, take stock of the deeply embedded racism that has been a part of our history (North and South), recognizing that a thoroughgoing accounting will involve reconfiguring our public and institutional spaces in many ways. Because that has yet to be done, and the younger generation of Black militants will, rightly, not be content until it is.

It's sad that after having been through 12 years of grade school in CA and graduating from a UC, I just learned this about Wilson. It’s silly that I'm surprised I didn't learn of his racism I suppose, but I'm glad I do now. My opinion is forever changed.

Many commenters were startled to learn about a long known but rarely taught side of Woodrow Wilson. White people have a lot to be surprised about. The very nature of white supremacy requires sanitized teaching about slavery, the genocide of indigenous people, the reach of U.S. militarism and many other topics.

Fortunately, gains from past struggles give African Americans increased opportunities to expose what was previously deliberately obscured. Ta-Nehisi Coates is the best known of a new generation of black, indigenous, Hispanic and white writers, scholars and activists revealing ugly realities hidden from most of us.

Even the New York Times conservative columnist David Brooks has acknowledged this development. “So much of the national conversation this year has concerned how to think about past racism and oppression, and the power of that past to shape present realities: the Confederate flag, Woodrow Wilson, the unmarked sights of the lynching grounds. Fortunately, many people have found the courage to tell the ugly truths about slavery, Jim Crow and current racism that were repressed by the wider culture.”

Admittedly, new information does not necessarily translate into social change. Cherished and deeply rooted beliefs are not easily surrendered. I often think of how long it took for the arguments of Copernicus and Galileo that the earth revolved around the sun, not the other way around, to be accepted. Ideas and habits are stubborn. Systems resist change. Powerful institutions have vested interests in preserving the status quo.

By way of example, a recurring concern of those responding to the Times’ Woodrow Wilson op-ed was, “Where will it all end? Will we have to destroy Mount Rushmore?” some asked. Maybe we should. Not just because it honors slave owners Jefferson and Washington, Mount Rushmore is also a powerful symbol of brutality and racism toward indigenous people.

As idigenous scholar Roxanne Dunbar-Ortiz points out in her book, An Indigenous Peoples’ History of the United States, “The most prominent struggle has been the Lakota Sioux’s attempt to restore the Paha Sapa, or Black Hills, where the odious Mount Rushmore carvings have scarred the sacred site. Called the ‘Shrine of Democracy’ by the federal government, it is anything but that; rather it is a shrine of in-your-face illegal occupation and colonization.”

White racism distorts how we think about virtually everything, including history itself. No one will dismiss Bill O’Reilly’s goofy books about Jesus or Lincoln or Patton or Reagan as irrelevant because, “oh, that was a long time ago, it’s got nothing to do with me now.” As a general proposition people appreciate that we can discover in the present important things we didn’t previously know about the past.

Not so when it comes to race in the USA. Not for some people anyway.

This matters a great deal. In many years of anti-racist work, I have discovered that whites who deny any connection to the racism of the past will also generally deny any connection to the racism of the present. “Please don’t tell me,” cry deniers of systemic white racism. One step removed is the view that we should “accept” the history but must take the good with the bad. This is sometimes known as the “warts and all” theory of history. A variation is the convenient idea that slavery was the “original sin.” Sin, of course, in the Western Christian point of view is inevitable and immutable.

This takes an especially pernicious twist when white racism deniers argue that there has always been slavery as though that itself somehow makes it justified. It’s not true that every society over all time has enslaved people. But even if it were true, the kind of slavery on which the U.S. was built is unlike any other that preceded it. It co-evolved with capitalism and it conflated slavery with “race”—plantation capitalism as the Rev. James Lawson calls it. CSU Fresno scholars Blain Roberts and Ethan J. Kytle put it this way recently in theNew York Times: "New research has gone further, exposing how American capitalism and democracy — once thought to be antithetical to slavery — emerged hand-in-hand with it.”

Hard as it may be for propaganda-conditioned whites to grasp, global race-based capitalism is not a system of the past with lingering effects. It is a living,  breathing organism of the present. It is a unitary thing. It is therefore not a good thing with warts. It is one thing. The “good” things always comes packaged with the “bad” thing. The mechanics of how it often works has a name: grand bargains.

The mother of all grand bargains is the U.S. Constitution which accommodated slavery in several ways, including the notorious three-fifths clause. While the Constitution was by no means the first grand bargain, it solidified a pattern that continues to this day. The New Deal, as Ira Katznelson demonstrates in his book Fear Itself, was another grand bargain that combined “progressive’ achievements such as union rights and Social Security with reaffirming the power of Dixiecrats and the institutions of Jim Crow.

Katznelson is white. So am I. So are many others now writing and speaking honestly and openly about the enduring power of white racism. That is valuable because it strengthens the idea that whites can come to terms with reality, past and present, as opposed to the myths we are encouraged to believe. As we do so, another world does become possible.

Of course white people can’t “save” the world. That mindset is the problem not the solution. But we can help. As Vietnam antiwar leader Rennie Davis points out, it is when we stop being invisible to each other that we start to become a movement.