Best TV of 2015: The most compelling performances of the year

Here are the 8 actors you couldn't take your eyes off of, who stole every scene they were in 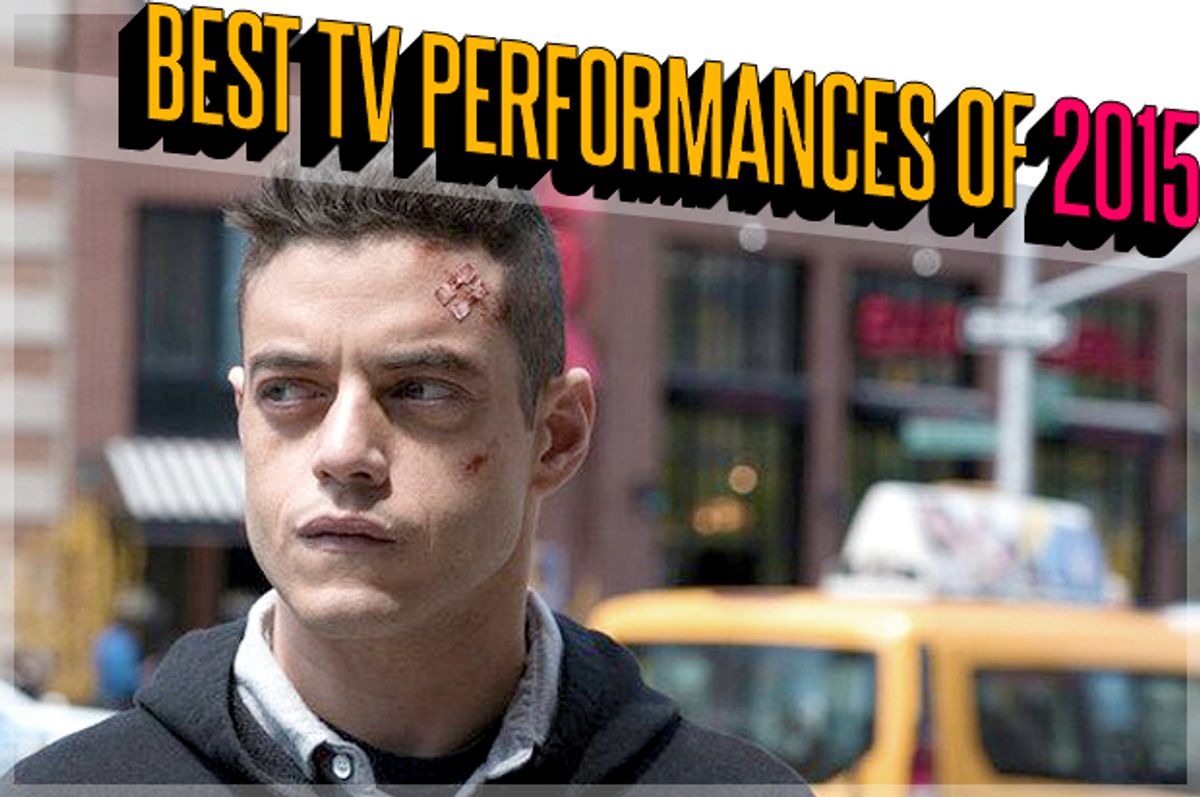 Aya Cash’s character Gretchen, on this raunchy little romantic comedy, was introduced to the audience as a selfish, slightly unstable, but incredibly endearing firecracker—one who happily stole gift-wrapped presents from weddings and yelled back at shushing moviegoers. Midway through Season 2, though, creator Stephen Falk sprung a fast one on the audience, revealing that Gretchen has near-debilitating periods of depression. Mental illness has all kinds of faces on television, but what was astounding about “You’re the Worst’s" is how recognizable and accurate Gretchen’s experience was, especially when it came to the havoc it wreaked on her still-new relationship with Jimmy (Chris Geere). Through what was an incredibly ambitious season, Cash’s performance was a rock-solid constant, imbuing Gretchen with the same spirit of sass and wit that made her so appealing in Season 1 while also depicting the hollowed-out emptiness of depression.

David Simon and William F. Zorzi’s extraordinary miniseries about the sudden national profile of a city council in Yonkers stars Oscar Isaac in the role of charismatic, successful and ultimately doomed Mayor Nick Wasicsko. The miniseries is fantastic—it’s one of my best shows of the year—and a great deal of the credit goes to Isaac, an acting heavyweight who starred in two of the best films of the year (“Ex Machina” and “Star Wars: The Force Awakens”) and carries “Show Me a Hero” through turbulent race relations to its inevitable, tragic conclusion. It’s difficult to create a suspenseful story about events that are a matter of public record; it’s also difficult to bring a character to a foregone conclusion and still make it heart-wrenchingly affecting. Isaac manages both with what looks like ease.

A season-and-a-half in, the CW’s “Jane the Virgin” is one of the most consistently sunny hours on television—a mélange of melodrama, Latino heritage and single motherhood, with a style and wit that is second-to-none. Telenovela star Jamie Camil plays a telenovela star named Rogelio de la Vega on the show, and he is, week after week, one of the most hilarious characters on television. If Rogelio is the entirely non-self-aware narcissist type, Camil is acutely and hilariously tuned in to the foibles of the superstar—from speaking in hashtags to constantly preening in any available reflective surface. Rogelio—in his purple presidential suit and exaggerated, heightened sense of drama—is the embodiment of the aesthetic of “Jane the Virgin,” in that he is perpetually a delight to watch.

This HBO original film followed the story of Bessie Smith (Queen Latifah), a trailblazing jazz singer with an enormous personality who worked with Ma Rainey and Columbia Records in the 1920s and became the highest-paid black entertainer in America. It had some issues, in terms of storytelling—including a recurring flashback motif that didn’t quite track and the muddled second act of most biopics. And Latifah, for all of her talents, is not the most comfortable lead actress. But where Latifah couldn’t carry the scene, veteran actress Khandi Alexander could and did, as Bessie’s abusive-at-times older sister Viola. I’ve never seen anything quite like the screening audience’s reaction to Alexander’s performance; she’s so talented that she was a bolt of energy in any scene she was even peripherally in. The entire audience, including myself, laughed out loud at a moment where Viola did nothing but walk across the frame in the background. That, I tell you, is talent.

The second installment of Nic Pizzolatto’s anthology miniseries with HBO was an awful failure—poor idea, poor execution, poor timing. But Rachel McAdams, who played police officer Ani Bezzerides, was the show’s one saving grace—the one actor who could make you care about the show, even if what was happening on-screen barely made sense at all. She was able to channel rage, trauma, affection and vulnerability—becoming the emotional center for a show that had gone off the rails long before. The show didn’t quite deserve her, but then again, “We get the world we deserve.”

“Mr. Robot”—USA’s sleeper sci-fi hit, this summer, from creator Sam Esmail—would not have been the same without the slightly unhinged, slightly creepy presence of Rami Malek as protagonist Elliot Alderson. As Elliot, Malek narrates, addresses the viewer, hallucinates while on morphine, and casually dismantles the cyberreality of the people around him with the tossed-off detachment of an actual genius. Voice-over narration can be irritating and distracting on many television shows, but on “Mr. Robot,” it was crucial to getting inside Elliot’s head, making him television’s most unreliable narrator even as we watched him manipulate other people’s lives with frighteningly real consequences. Malek’s vacant stare, while clad in a black hoodie, became a crucial element of the show’s brand; just as “Mr. Robot” was unexpectedly fantastic, Malek was unexpectedly (to me, anyway) talented for the role, managing to sell both power and powerlessness in one slim package.

7. Constance Wu, “Fresh off the Boat”

Jessica Huang, the Taiwanese-American matriarch of “Fresh off the Boat,” is a real woman depicted in a somewhat conflicted way by her son, Eddie Huang, whose memoir is the source material for the ABC sitcom. Into that fraught space stepped Constance Wu, a practically unknown young actress who was about to become the first Asian-American lead woman on a sitcom in 17 years. The entire cast and crew of “Fresh off the Boat” are doing crazy heavy lifting with what is a deceptively simple family comedy—bringing in threads about assimilation, identity, representation and the usually painful immigrant experience to bear on suburban Orlando, Florida—but Wu is the standout lead. She is often the most prickly character, but makes up for it by being the most emotionally resonant, and her relationship with young Eddie (Hudson Yang) is the heart of the whole show. Her anxieties and foibles also turn into some of the show’s strongest comedic material, such as her years-long passive-aggressive competition with her sister for their mother’s affection and her particular weakness for Stephen King novels. Jessica is a rather complicated character for a sitcom, but Wu makes her easy to read.

A brilliant actor in a brilliant role, Mark Rylance plays Thomas Cromwell—Henry VIII’s chief minister during the ousting of Katherine of Aragon, the ascension of Anne Boleyn, and the split of the Church of England from the rule of the Vatican—in this
miniseries adaptation of Hilary Mantel’s Man Booker Prize-winning novels “Wolf Hall” and "Bring Up the Bodies." The six-part story is gorgeous, from grandest themes to smallest details; Rylance holds it together with a solemn and mostly silent dark gaze, carrying out the pageantry of unchecked monarchy with the slow realization that he will likely be his own next victim. For American audiences, “Wolf Hall” is an opportunity to see one of the finest British stage actors of our generation—but regardless, it’s an opportunity to inhabit the fraught world of Cromwell’s England, for six sublime hours.