Legit reason for Democrats to be nervous: Latest poll shows Clinton and Rubio in statistical tie 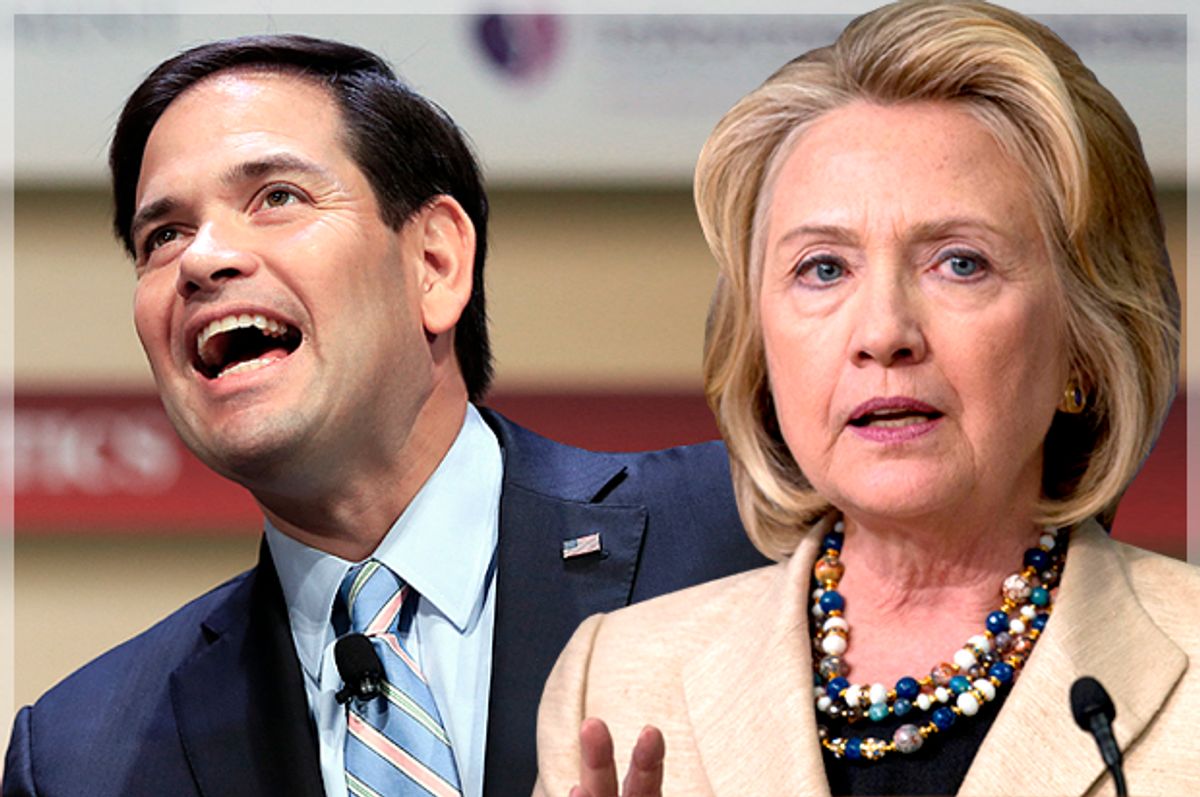 A Quinnipiac poll was released Tuesday and among the more interesting findings is the head-to-head matchup between Hillary Clinton and Marco Rubio. Clinton leads Rubio 44-43, which amounts to a statistical tie. Just two months ago, however, Clinton beat Rubio 46-41 in the same Quinnipiac poll. So Rubio appears to be gaining ground on Clinton, and that should concern Democrats.

As it stands, Clinton is the clear front-runner in the Democratic race. Her most likely opponents in the general election are Donald Trump, Ted Cruz and Marco Rubio. Trump is still dominating in the national polls and in most of the early primary states, save for Iowa. And that’s good news for Democrats: Both Clinton and Sanders lead Trump in head-to-head surveys, and would likely win in a landslide.

But Rubio is a different story.

Unless something dramatic happens, Rubio will be the preferred establishment candidate heading into the convention. If Rubio somehow emerges with the nomination, the general election would be highly competitive, regardless of who the Democratic nominee is (Sanders trails Rubio 42-45 in the new poll).

Based on a recent Politico survey, taken before the new Quinnipiac poll, Democratic operatives in the first four nominating states were already fearing a potential Rubio candidacy. The consensus was that Trump or even Cruz would be more desirable. Sixty percent of Democrats, in fact, said Trump “would be the easiest of the leading GOP candidates to defeat in the general election.”

It would also be a boon for the Democratic Party. A Trump-Clinton race would not only hand the presidency to the Democrats, it would also “lead to a Democratic landslide up and down the ballot.” A Trump victory would be a “self-inflicted tsunami for the GOP,” according to an anonymous New Hampshire Democrat. “Democrats, independents and mainstream Republicans would abandon the top of the ticket and perhaps sweep out Republicans down ticket as well.”

They’re much less sanguine about their chances against Rubio, however. Seventy percent of the strategists surveyed believed Rubio would be the most formidable opponent among the five GOP contenders. A Nevada Democrat said of Rubio: “He does a superb job of using his story in his campaign; of all Republicans, he has the best chance of reaching Hispanic voters; his youth and charisma are contrast to Clinton.”

It’s not clear why Rubio is climbing in the head-to-polls with Clinton. Part of it has to do with Jeb’s decline, which created space in the establishment lane of the party and boosted Rubio’s profile. Clinton’s favorability numbers are also comparatively low. A Democratic strategist in South Carolina credits Rubio’s youthful exuberance: “Rubio excites audiences that hear him – he’s an optimistic face on regressive policies – which makes him very dangerous.”

It’s hard to disagree with that observation. Rubio has old ideas, but they’re obscured by a fresh face, and that is problematic for Democrats in a national election. Even worse, if Rubio does win the nomination, he’ll have broad support within the Republican Party, which is crucial in a presidential campaign.

At the very least, Rubio’s ascendancy should give Clinton supporters pause. Whatever you think of his ideas (and they’re bad), Rubio has some political skill and he would be a challenge for any Democrat. If Trump collapses at some point (and that seems less likely every day), then the Republican race would likely come down to Cruz and Rubio. The GOP knows Cruz can’t win a general election, so they’d do everything possible to hand Rubio the nomination.

And that’s the worst case scenario for the Democratic Party.