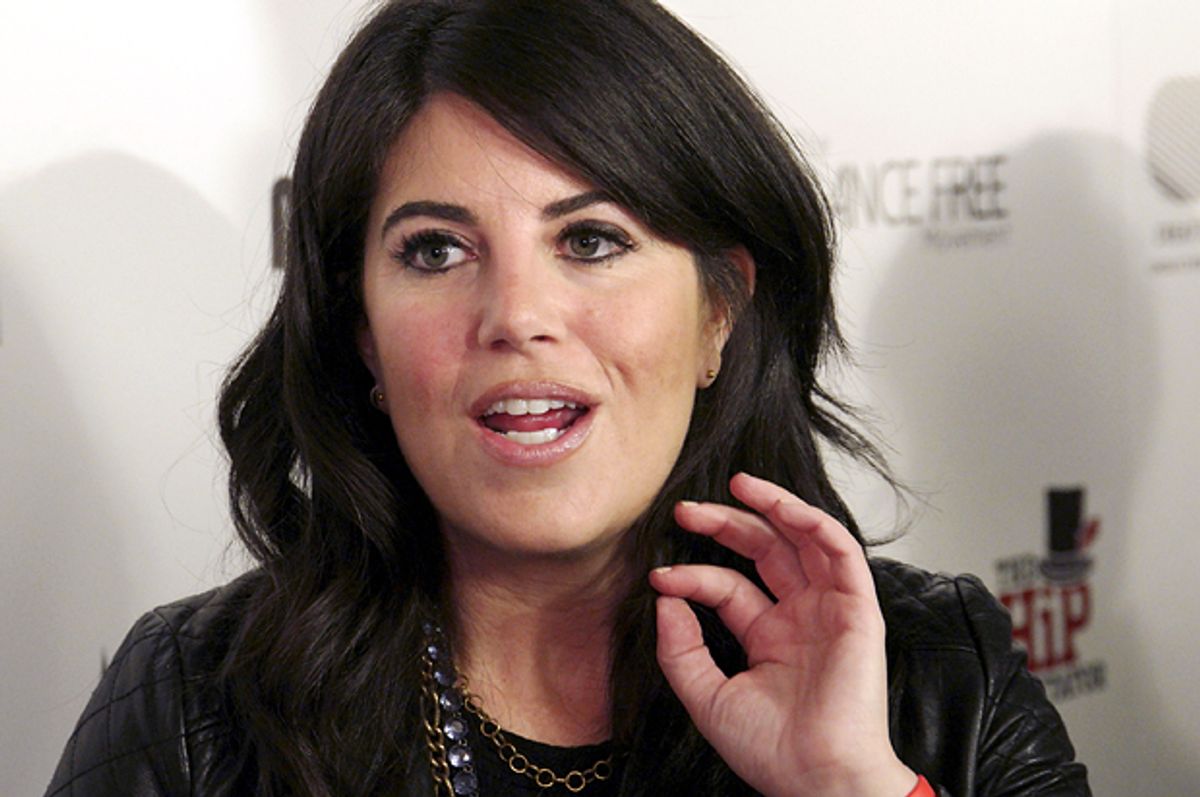 For many observers, this was the year Monica Lewinsky got the credit she deserves for suffering the wrath of online and offline gossip, taunting, jokes and the complete disruption of life as she knew it. Following last year’s groundbreaking Vanity Fair essay and Forbes Under 30 speech, she proved herself a powerful advocate against bullying with her well received TED talk, “The price of shame.”

But for conservative author Kurt Schlichter, Lewinsky will never be more than the woman who once dabbled with Bill Clinton and a cigar. In other words: a sexual object. “[I]t’s gonna take a lot more for me to get upset at a woman who enabled a guy who turned the Oval Office into a frat house and his intern into a humidor,” he told Don Lemon before her was cut off by the host during a recent CNN segment. Schlicter, it seems, does not seem to be able to let Lewinsky jokes go. In May, he Tweeted:

With his CNN statement, Schlichter also showed he wants to drag Hillary Clinton into the quagmire of Bill Clinton’s sexual transgressions, rather than treating her as a candidate with her own set of values and political beliefs. But I’m going to focus here on Lewinsky, because I believe the way we think about Lewinsky reflects how we think about all women. If Monica Lewinsky is a slut, a whore, a hussy, a homewrecker, then so am I. While I’ve never met Bill Clinton, I’ve had sex with a married man, had premarital sex, had sex with a much older man, and have claimed all of that publicly. Any women who dares to step outside the precise sexual boundaries many still expect women to maintain can easily find herself similarly branded.

Monica Lewinsky’s name has become a stand-in for all the ways we as a culture hate women, especially sexual women. We need look no further than TED social media editor Nadia Goodman’s post about what happened after the conference posted Lewinsky’s talk online: “As soon as her talk went up on Facebook, in too little time for anyone to have actually watched the 20-minute video, the comment thread was deluged with vitriol and hatred. People called her a slut and a whore, made jokes about sucking dick, and said she deserves the shaming because ‘shaming is an important part of how we shape our culture.’ They attacked her character, her appearance, her choices, even her right to live. One commenter blamed her both for Al Gore losing the presidency in 2000 and the 9/11 attacks.”

Jessica Bennett, who profiled Lewinsky for The New York Times in the month leading up to her TED talk, told NPR that much of the language around slut-shaming has changed, for the better, in the ensuing years since the scandal. “I think that a lot of the language that was used back then — you know, she was called a tart, a tramp, basically everything but slut, publicly — it would never fly today. You wouldn't get that on the air. You wouldn't get that in columns in The New York Times. And back then you did, with little criticism,” Bennett said.

But for some conservative critics, clearly that’s not the case. For them, it doesn’t matter what Lewinsky has made of herself since her youthful days as an intern. It doesn’t matter that she’s active on Twitter or that she’s a Vanity Fair contributing editor and an ambassador and strategic advisor to Bystander Revolution, the organization founded by MacKenzie Bezos “to create a source of direct, peer-to-peer advice about practical things individuals can do to help defuse bullying.” To them, she’s simply a human humidor, a passive recipient of Clinton’s predatory actions, a description which conveniently means she can’t take responsibility for her own role in the affair, or ever position herself as a woman in her forties who’s looking forward, not back.

As Lewinsky wrote in Vanity Fair last year, “But more and more I’m finding that those who have lost command of their public narratives…shake off the assault or the slight, take control of their rightful place in their community or the larger culture, and use social media to return the salvo. They refuse to have their identities swindled or misshapen. Instead, they take charge. They turn the attack on its head and use it as an opportunity for self-definition, instead of just taking blood as they go down.”

I’m glad to see Lewinsky being an active participant in the cultural conversation about bullying and making it clear that she is far more than the worst that conservatives will surely continue to dredge up about her during this election cycle. I’m glad that women, whether they share a fraction of Lewinsky’s notoriety or not, are refusing to be cowed by men who wish only to view them through a sexual lens.

Using Lewinsky as either a punchline to a joke or political fodder in 2015 puts you firmly in the camp of those who don’t believe women have sexual autonomy. It means you see women as inextricably tied to our worst sexual decisions, and don't want us to ever grow up or move past those choices. Additionally, in Schlicter’s case, it means he’s fixated on positioning Hillary Clinton as an “enabler” of Bill, rather than a political figure in her own right.

I’ll return to Monica’s words one final time, because if anyone has learned how to turn negativity into positive action, it’s her. When asked about awful online comments and internet shaming, she told Glamour earlier this month:

“But as painful and destructive as they are, the hateful comments allow us to map the underlying beliefs of many people in a way we've never been able to before. It's almost as if all of the negativity and misogyny needs to come to the surface so we can fully understand what it is, and how deep it goes, before we can begin to shift it.”

There’s still plenty we need to shift before the likes of Schlichter stop erasing Lewinsky’s autonomy or her current voice, but those changes are happening.