Two-faced Ted Cruz: Is he against gay marriage? Depends on whom he's talking to

Cruz tells the crowds gay marriage will ruin us, but assures more liberal donors that changing law not a priority 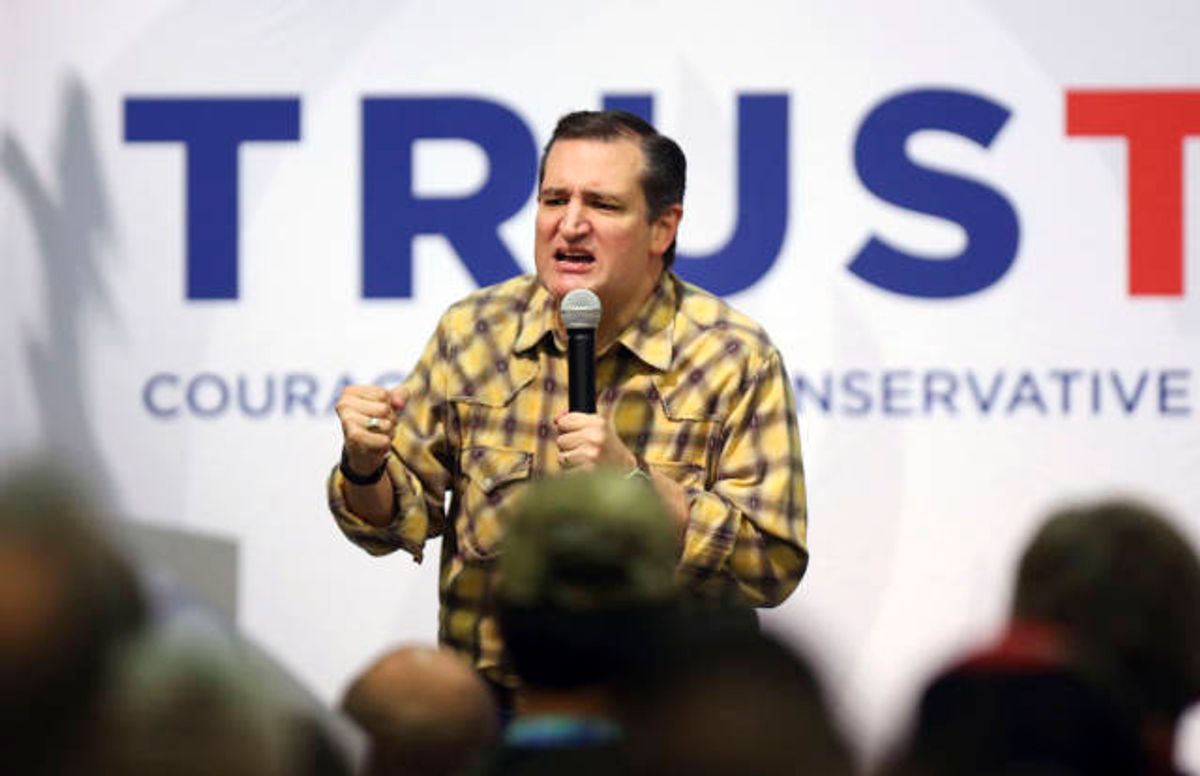 Ted Cruz's electoral strategy, particularly for winning the nomination, is to present himself as a near-prophetic figure to Christian conservatives, a strategy that has required him going hard in public against gay rights. But, as Mike Allen at Politico reported on Wednesday, Ted Cruz drops the medieval crusader act behind closed doors when meeting with funders that are more interested in tax breaks than forcibly divorcing happy couples. Allen describes a Q&A period at a New York law firm where the audience tended to be a lot more liberal on these social issues.

During the question period, one of the donors told Cruz that gay marriage was one of the few issues on which the two disagreed. Then the donor asked: “So would you say it's like a top-three priority for you — fighting gay marriage?”

“No,” Cruz replied. “I would say defending the Constitution is a top priority. And that cuts across the whole spectrum — whether it's defending [the] First Amendment, defending religious liberty.”

Soothing the attendee without contradicting what he has said elsewhere, Cruz added: “People of New York may well resolve the marriage question differently than the people of Florida or Texas or Ohio. ... That's why we have 50 states — to allow a diversity of views. And so that is a core commitment.”

The Cruz campaign is denying that this is a contradiction, arguing that the "leave it to the states" line has always been his policy.

But Cruz shouldn't be allowed to wriggle out of this on a technicality. What this incident shows is that the empty rhetoric about "religious liberty" is all about trying to manipulate different audiences into hearing a different message. Here, he's clearly using it to create a false sense that he's a live-and-let-live guy, but when he's in a different crowd, he's putting forward a different face.

For the everyday evangelical crowd, "religious liberty" is clearly just coded language for denying gay couples the right to marry. That's why Cruz rallied around Kim Davis, whose entire case was a legal test to see if there was a way to make gay marriage illegal in all but name. Davis's adamant refusal not just to issue licenses but to let anyone else do so was the polar opposite of the live-and-let-live attitude Cruz wants his New York funders to perceive.

Cruz is so eager to pander to the theocratic elements on this issue that he even went to a Christian right conference organized by people who have come out in favor of laws that make homosexuality punishable by death.

Most Republicans have to play this game of pandering to the hard right sometimes while pretending to be moderate for more general audience, of course. But Cruz embraces the extremists on this front, making his play to be accepted as more moderate all the more ridiculous.