From “A New Hope” to no hope at all: “Star Wars,” Tolkien and the sinister and depressing reality of expanded universes

When fantasy sagas never end, we see the cycles of brutality and totalitarianism that fuel them don't, either 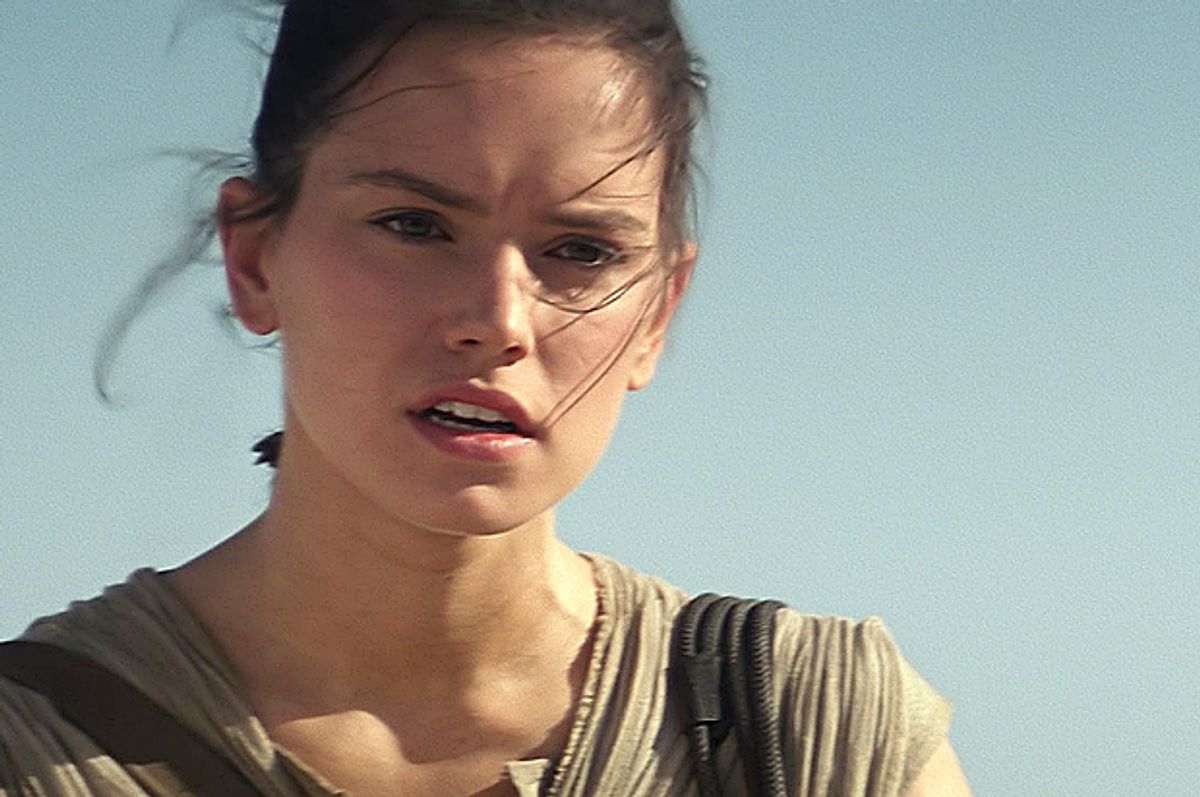 Note: Some spoilers near the end for “Star Wars: The Force Awakens,” though I try to be vague.

Not long after completing “The Lord of the Rings,” J.R.R. Tolkien briefly began work on a sequel called “The New Shadow,” set 100 to 150 years later during the reign of Aragorn’s son Eldarion. (The main link between the two stories is the minor character Beregond, the noble but disgraced soldier of Gondor whose son, Borlas, would have been a major character in “The New Shadow.”) “The New Shadow” reveals that the eucatastrophic fairy-tale ending of “The Return of the King” was extremely short-lived; with the Elves and the Wizards gone from Middle-earth, the Dwarves moving underground, and the Hobbits now isolated in what amounts to an enclave in the Shire, Men are quickly falling back into their old bad habits. In fact the Men of Gondor already seem to have forgotten most of the details of the War of the Ring, even though it remains in living memory: they seem not to remember, or take seriously, the fact that they once strode with gods and angels in a war against pure evil, and were victorious. Instead, children play at being Orcs for fun; the death of Elessar has been an occasion for political striving and reactionary plots; and even something like a secret death cult of devil-worshipping rebels seems to be spreading through the elites of Gondor.

Tolkien wrote 13 pages of it.

I did begin a story placed about 100 years after the Downfall, but it proved both sinister and depressing. Since we are dealing with Men it is inevitable that we should be concerned with the most regrettable feature of their nature: their quick satiety with good. So that the people of Gondor in times of peace, justice and prosperity, would become discontented and restless — while the dynasts descended from Aragorn would become just kings and governors — like Denethor or worse. I found that even so early there was an outcrop of revolutionary plots, about a centre of secret Satanistic religion; while Gondorian boys were playing at being Orcs and going around doing damage. I could have written a ‘thriller’ about the plot and its discovery and overthrow — but it would have been just that. Not worth doing.

Instead, Tolkien turned his attention back to the imaginative project that had more or less defined his life: “The Silmarillion,” begun between 1914 and 1917, which he tinkered with on and off until his death in 1973. “The Silmarillion” has always marked, I think, the grey line between being a casual Tolkien fan and becoming a Tolkien enthusiast — a path that then leads one even further into Christopher Tolkien’s twelve-volume “History of Middle-Earth” and the discovery of Tolkien’s own very elaborate (and somewhat fannish) self-commentary on his legendarium alongside many multiple alternate drafts of the narratives that form the barely glimpsed mythological background of “The Lord of the Rings.”

“The Silmarillion” is nominally a prequel — ostensibly it is the Elvish legends that Bilbo translated and appended to the Red Book while he was retired in Rivendell — but the published version of the book includes a two-page summary of the War of the Ring that culminates in a brief, “New Shadow”-style glimpse past Aragorn’s reign. We are reminded of the sapling of the White Tree that Aragorn and Gandalf find in the mountains near Gondor, which Aragorn plants in Minas Tirith as a symbol of his reign, and told that “while it still grew there the Elder Days were not wholly forgotten in the hearts of the Kings.” While it still grew there — which is to say, it doesn’t grow there anymore.

I don’t know that I would call this material “sinister,” but I taught “The Silmarillion” this semester after having tried and failed to read it as a child, and I think it would certainly be fair to call it “depressing.” What looks, in “The Lord of the Rings,” like a fairy-tale about how good and decent folk are able to do the impossible and defeat evil (with just a little bit of help from the divine, here and there) becomes in “The Silmarillion” and “The New Shadow” and Tolkien’s pseudo-theological commentary only the briefest, most temporary respite from a nightmare history in which things always turn out wrong, millennia after millennia after millennia. In fact Arda, the planet on which the continent of Middle-earth rests, is a cursed and fallen place, infused with evil and wickedness at its material core, and the only thing to do is raze the place and start over, as Eru Ilúvatar will at long last at the very end of time. To study Tolkien beyond “Lord of the Rings” is to come to a keen understanding of how tragic this history actually is, how “The Return of the King” looks like a happy ending mostly because that’s where Tolkien (quite deliberately and self-consciously) decided to stop writing. But the Fourth Age was no better than the Third, and likely quite worse, and on and on through the degenerative millennia that bring us to the end of the Sixth Age and the beginning of the Seventh with the fall of the Third Reich and the development of the atom bomb.

I’ve been thinking about “The New Shadow” since it became clear that “Star Wars: The Force Awakens” would be borrowing from the Expanded Universe the notion that the Battle of Endor at the end of “Return of the Jedi” did not mark a full or permanent victory for the Rebel Alliance. “The Force Awakens” is “The New Shadow,” sinister and depressing, except they decided to go ahead and do it anyway. I joke that you can tell who read the Expanded Universe novels and who didn’t based on whether your reaction to “The Force Awakens” is sadness — but the events of “The Force Awakens,” as sad as they are, are really only the tip of the iceberg in terms of how horribly Luke, Leia, and Han are punished in the EU novels, over and over, as everything they attempt to build turns to ash and the galaxy repeatedly falls into chaos, war, and catastrophe. In the farthest reaches of the EU universe, the Star Wars Legacy comics, set around 140 years or so after the Battle of Yavin, Luke’s descendent Cade Skywalker wanders a Galaxy that is again in war, as it always is, with a resurgent Empire again ruled by Sith masters — and when one casts oneself into the mists of time in the other direction (in material like the “Knights of the Old Republic” games, set thousands of years before “A New Hope”) one finds more or less the same basic story of genocidal total war playing out there too. Star Wars has always been, in the EU at least, a universe more or less without hope, that only looked hopeful to casual fans because they were looking too closely at just a very slender part of it.

This is why, while I can certainly understand the impulse to complain about “The Force Awakens” as derivative, I really think this is more repetition with a difference than mere or base or stupid repetition. One Death Star is a horror; two Death Stars and one Starkiller Base and whatever horrific murder innovation the First Order will come up with for Episode 9 is something more like the inexorable logic of history, grinding us all to dust. Likewise, it’s true that “The Force Awakens” hits many of the same story beats as the Original Trilogy, but almost always in ways that are worse: the death of Obi-Wan was sad but mysterious, suggestive of a world beyond death which the Jedi could access, while the death of “The Force Awakens”’s version of Obi-Wan is not only brutally material but visceral, and permanent, as far as we have any reason to believe right now. The loss of Alderaan is sad, but the loss of what appears to be the entire institutional apparatus of the resurgent Republic is unthinkably devastating; aside from the loss of life it would take decades for the Galaxy to recover from such an event, even if they weren’t having to fight off the First Order while doing it.

The film is extremely vague about the relationship between the Republic and “the Resistance,” but it appears to be a proxy guerrilla war against the First Order fought inside their own territory, secretly funded by the Republic — and prosecuted by Leia, Akbar, Nien Nunb, and all our heroes from the first movies, whose lives are now revealed as permanently deformed by a forever war they can never put down or escape. (If you want to ask me where Lando is, I think he said “good enough” after Endor and walked away, and that sort of makes me hope they never find him, never drag him back into it.) It’s horrible to lose a parent to addiction, or to mental illness, or to ordinary everyday cruelty, however you want to allegorize Vader’s betrayal of his children — but how much worse would it be to lose a child to it, how much worse would such a thing taint every aspect of your life and poison all your joy.

That Star Wars implies a world of sorrow belied by the spectacle of “Jedi”’s happy ending isn’t a surprise to me — I told you, I read the EU books — but I can see why it’s a surprise to someone whose last memory of these people is smiles, a fireworks display, hugs, and a picnic. “Return of the Jedi” never asked us what we thought would happen when those people woke up the next morning and the Empire still had 90 percent of its guns, ships, territory, generals, and soldiers, ready to descend into vicious, scorched-earth fanaticism as they slid into defeat; it just wasn’t that kind of story. “The Force Awakens” is that kind of story, and I find that interesting enough to be excited about 8 and 9, to see where they try to take this story now that it turns out fairy-tales aren’t real and that deeply entrenched totalitarian systems don’t have exhaust ports, trench runs, or single points of failure. So I think the emerging critical consensus that “The Force Awakens” infantilizes its audience by re-presenting us with the same images we all saw as children is actually deeply wrong: “The Force Awakens” condemns Luke, Leia, and Han to actually live inside history, rather than transcend it, and it condemns us too.

I want to predict, incidentally, that this link to Tolkien is at least partially the solution to what appears to be the “Mary-Sueism” governing Rey and to a lesser extent Kylo Ren in the film. I think the Force “awakens” in Episode 7 because the Force is currently chaotic and uncontrolled — and what looks like bad writing that leaves Rey and Ren massively overpowered compared to characters from the other movies is in fact a plot point about what happens when the Force isn’t being tended and is left on its own. I think the Force, in the absence of human attention, is actually dangerous, wild, like an ungrounded electrical current. I think the punchline of this whole thing is that Luke has to restart the Jedi Order, whether he wants to or not — because, as Tolkien would have known, the Force needs a gardener.

A version of this essay originally appeared on the author's blog.

Gerry Canavan is an assistant professor of English at Marquette University and the co-editor of "The Cambridge Companion of American Science Fiction." He is also the author of a forthcoming monograph on Octavia E. Butler.