Hey, Santa, forget the socks this year. Is it too much to ask for a presidential candidate who can really lead instead?

I don't want a fundraiser-in-chief or a fearmonger-in-chief. I want someone who gets the real challenges we face 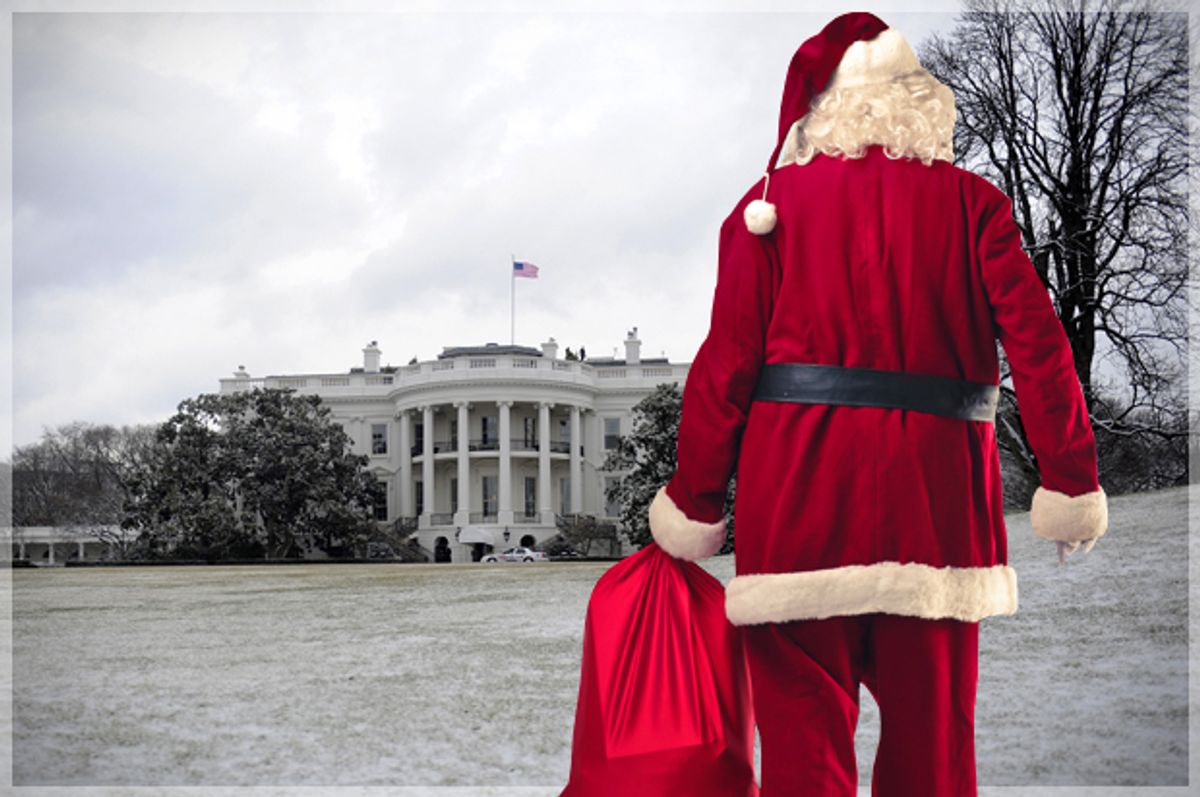 I promise I’ve been a good girl this year. I know that sometimes I’ve behaved like a disengaged and jaded millennial. It was hard to get riled up about some of those local ballot initiatives. But I’ve been paying attention, I promise. I know you’re rather busy, but if it wouldn’t be too much trouble, here is my Christmas wish list for a presidential candidate:

First, let me just clarify what I am not looking for:

I do not want a Fundraiser-in-Chief.

I do not want a Fearmonger-in-Chief.

I want to vote for a Leader of the Free World.

Here’s what I mean by that. I’m looking for someone who recognizes that the challenges of today demand global and collective action. I’m looking for someone who’s a bridge-builder, and who can bring global leaders together, to fight extremism, to feed 8 billion people, and to address climate change. These challenges are too big for any one country to address alone. To accomplish this, I think it’s reasonable that candidates be generally aware of what’s going on in the world. If a candidate could tell me the title and author of the last book he or she read on something outside U.S. borders (some possibilities are: the Middle East, China or Central Asia), that would be wonderful. An inability to do this doesn’t bode particularly well for the candidate’s skill in navigating a world that’s increasingly interconnected. North Korea and China have pretty much proved that the distance between countries should be measured in mouse-clicks rather than oceans. I want my candidate to acknowledge and understand this.

If a candidate could tell me how he or she is going to close the enormous wealth gap in our country, that would also be great. As Santa, you of course know that the wealth gap decreases job growth by impacting the middle class, slows our long-term economic growth and thus weakens our global competitiveness, and hurts our kids even more than us. No amount of presents under the tree can change that. This is a problem much more of money than political party affiliation. And please, if the candidates could refrain from giving me some ruse about how "socialism" is a dirty word, that would be great. Because if by "socialism" they mean "sharing," then yes, I think this is something we should all stand behind. Isn’t that what this season is all about? Sharing is something, incidentally, that we all learned to do in kindergarten. So I’m not quite sure why we’re holding our 6-year-olds to higher standards than we are our elected officials.

I would also like a candidate to tell me how he or she is going to get money out of politics. Money is not speech, we all know this. So please, let’s not waste our brain cells talking ourselves into something we know to be ridiculous. Allowing money to speak is tantamount to creating a particularly insidious and destructive form of gerrymandering. A university is not a person, it’s a group of people. A company is not a person, it’s a group of people. So let’s stop leapfrogging democracy. One person, one vote. If a candidate could tell me how they’re going to put this at the head of their legislative agenda when they take office in January 2016, I would really appreciate it!

That’s my list. Thank you, Santa, for that new sweater last year, and for the cookies, and for all the socks. I know this year I’m asking for something a little harder to deliver. But ‘tis the season, and this is what I would like. So if you could get your best elves working on this, I would be ever so grateful.